Grassroots
Would like to see lot more Indian coaches in the system in 4-5 years: Kiren Rijiju 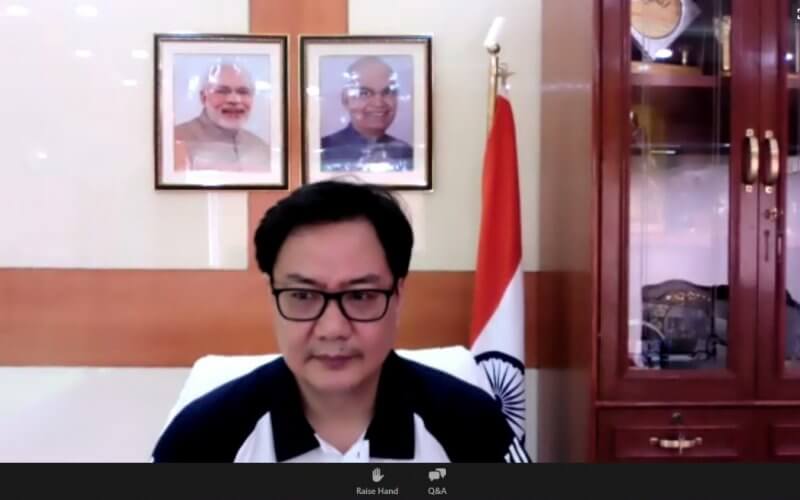 NEW DELHI: Minister for Youth Affairs and Sports Mr. Kiren Rijiju laid special emphasis on the importance of growing home-grown coaches to broad-base football and other sports in the country, in an online discussion on Friday, September 4, 2020.

“Coaching is an integral part of football. A lot of foreign coaches are brought in at expensive salaries but we have to build our own coaches too,” said the Minister during the webinar, going on to encourage other sporting organisations to hire trained Indian coaches in important decision-making positions.

Earlier this week, the All India Football Federation, along with the Sports Authority of India, launched the Khelo India E-Pathshala, a joint initiative to athlete coaching and education programmes in football at the grassroots and intermediate levels.

“We have a lot of coaches in our country. Now the coaching positions are starting to get filled with Indian coaches. We are working on a system where the monetary aspect of hiring coaches would be more dependent on the performance of the coaches,” continued Mr Rijiju. “I would like to see a lot more Indian coaches in the system in the next four-five years.”

Mr. Rijiju was speaking at the launch of Enjogo – a football training app (www.enjogo.life), the first of its kind in India which caters to every football player in the country – from schoolkids to professional footballers. The app has been designed in wake of the Covid pandemic situation which forced everyone to train from indoors.

AIFF President Mr. Praful Patel also congratulated Bhaichung Bhutia on the launch, stating that it would go on to improve the grassroots ecosystem in India.

The launch of @enjogo_ earlier today is great news! I congratulate @bhaichung15,@taidk & @bbfschools for leading homegrown tech innovation for Indian #football. This will certainly benefit the ecosystem greatly, especially the grassroots. All the best! @KirenRijiju @IndiaSports

Former India captain Bhaichung Bhutia, who was also one of the panellists lauded the efforts of All India Football Federation President Mr. Praful Patel for playing a crucial role in developing football in the country.

“Football has grown so much now. Mr. Praful Patel has singlehandedly brought the FIFA U-17 World Cup (in 2017). We showed everyone that we can host FIFA events successfully. We are about the host the U-17 Women’s World Cup too next year,” said Bhaichung. “I am sure this has encouraged more academies to grow, and to produce more players.”

Mr. Rijiju also went on to laud the AIFF after the webinar, when he took to twitter to hail the efforts the Federation has made to extend financial aid to FIFA U-17 World Cupper Anwar Ali. “I'm extremely happy to learn about the proactive step taken by AIFF by way of extending financial support to the young footballer Anwar Ali who is suffering from a heart ailment. Sports Ministry will be pleased to extend any further support required,” he tweeted.

I'm extremely happy to learn about the proactive step taken by AIFF by way of extending financial support to the young footballer Anwar Ali who is suffering from an heart ailment. Sports Ministry will be pleased to extend any further support required. @praful_patel pic.twitter.com/Todkrpj6Sx

The Minister also spoke at length about the importance of football with regards to his plans of building a sports culture in India.

“Football being the most popular sport on earth, we have to do well in it,” said the Minister. “We will be hosting the U-17 Women’s World Cup next year. Of course there was a postponement because of the pandemic situation, but I have been in touch with Mr Praful Patel and we are ready to extend all help.”