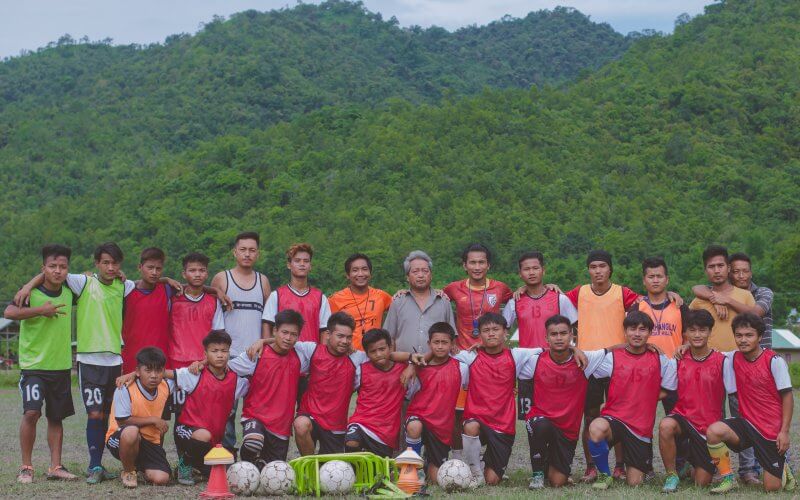 NEW DELHI: Early morning at 5 am a crowd of villagers gather around the village ground in Longja in the Chandel district of Manipur – barely a couple of hours from the Indo-Myanmar border.

A group of boys ranging from ages 8-20 have all formed a huddle around a nimble figure donning the Blue Tigers training kit, as the latter explains the finer details of the game to them.

The people gathering around the ground that is surrounded by the eastern reaches of the Himalayan mountains, faintly recognise the India International, who had last year scored his maiden goal for the Blue Tigers in the World Cup Qualifier against Afghanistan in Dushanbe, Tajikistan – Seiminlen Doungel.

For the 26-year-old winger this was an opportunity to get back to his roots and connect with people from the Kuki Tribe, who still live in the traditional manner.

“Coming here was quite special for me. My family is also from the Kuki Tribe. Much like most of the Kuki people my father also used to get his earnings from the farm. We have sort of moved on from that way of life since I became a professional. But coming here and experiencing the simplicity with which these people lead their lives was simply amazing,” Doungel said to the-aiff.com.

Doungel, who is fondly known as Len in the dressing room, went on to stay in that village for two-and-a-half weeks, in order to impart his footballing knowledge to the local kids.

“I felt a real connection to these people. Even when I am in Manipur I mostly get to speak my language (Thadou Kuki) at home. With these people I could speak that,” he said. “The kids there were really simple and did not know much about the world of football.”

Len explained that while the kids in the village did not know about the world of football, each one of them was encapsulated by the ‘beautiful game.’

“They all know how to play football and like to play it too. But what they do not know is the scope that the sport has in the modern-day. Back in my younger days we did not know much of the scope of pursuing football as a professional. But now football can give you a viable career -- be it as a player or in any field surrounding the game,” he explained.

A DAY IN THE KUKI LIFE

In the two-odd weeks that he stayed in the Longja village, Len followed a regimental lifestyle, heading out to the field with the boys as early as 5 am in the morning.

“I don’t think I’ve ever woken up that early to start my training,” laughed Len. “But these guys were all really eager to start their training early, and I obliged. Some of the guys were so enthusiastic that they would even come to the ground an hour before and would start warming-up from 4 am.”

“They were a little rusty at first, but with small tweaks to their training techniques here and there, we could soon see the change in the way these guys played,” said Len. “After a few days we took these guys to play against some neighbouring villages, and they actually won. First 1-0, and then 3-1!”

While the rigorous morning session would entail a lot of rest during the day, Len, along with the boys, would hit the ground again for another session between 4 pm and 6 pm in the evening.

“Once it gets dark, there’s very little to do there, and we all used to have our dinner and go to bed by 9-9.30pm,” he informed.

The members of the Kuki tribe are predominantly a farming society that works on the paddy fields in the nearby hills. While the crop provides for a major part of their livelihood, the villagers of Longja largely live via simple means.

“They knew that I am a professional footballer, and during my stay there, they did everything possible to accommodate my needs,” said Len. “They even offered to wash my clothes and boots after training.”

The people of the village even went to the extent of changing their own diet for the couple of weeks that the Blue Tigers midfielder stayed with them.

“The people of the village generally love to eat their staple diet -- pork and share the meat with everyone in the community. But I generally avoid that meat because of the fats. When I told them, they were very understanding offered me chicken instead. They themselves even refrained from eating pork for those two weeks, so that I would not feel left out. That was really sweet of them,” Len recalled.

The experience of going back in time to live with people of the tribe that he hails from has been an overwhelming one for the 26-year-old footballer, who generally does not get the time for such activities anymore.

“I barely have the time to just come home for a month or two during a regular season. But the lockdown has given me the opportunity to go back to my roots and experience first-hand, how the people of my community live in the rural areas,” said Len.

“I can say that they may not have a lot of amenities that we take for granted in the city, but the effort they put in, and the love that the shower you with is overwhelming. They may be poor, but they are rich at heart,” the 26-year-old quipped.