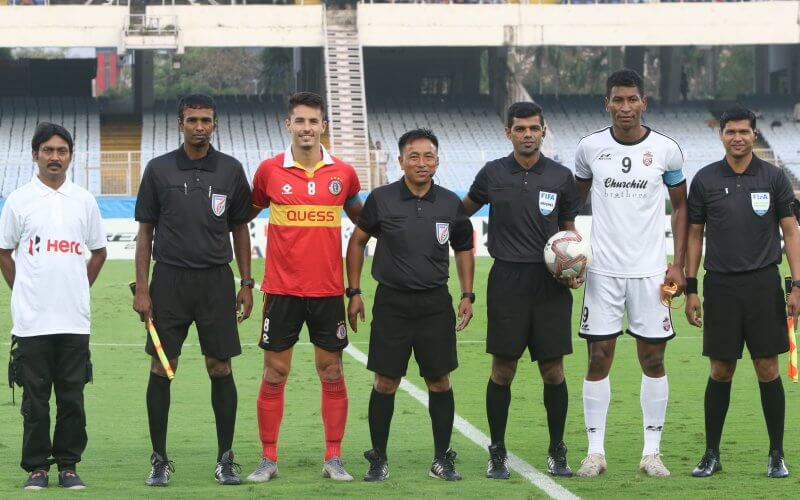 NEW DELHI: As Indian football continues to move forward together, efforts are being made by all stakeholders to keep progressing and constantly improving -- with one of them being the Indian referees.

In a chat with AIFF TV, AIFF Director of Referees Ravishankar J, a former FIFA Panel referee himself, termed the programme as “one of the greatest steps” taken.

"This is one of the greatest steps that we have taken. We thought that since every team has a coach and referees being a team themselves, we thought we should have a coach who would monitor them. Usually, the Referee Assessor (RA) for a game just monitors the performance of the referee or assistant referee in that game. But now, the coach will evaluate only a particular referee's performance from the batch under him."

"It allows comparing a referee's performance with the earlier game, to see whether his fitness and conditioning have improved, whether he has taken the points that he has been referred or whether he has noted what he has been advised. The thing is that he is monitored through the season by one single individual. It allows to work with the referee at a personal level," Ravishankar added.

AIFF Head of Refereeing Department Mr Ravishankar J and FIFA Panel Referee Rowan A open up about how having a coach has helped the referees 🙌#IndianFootballForwardTogether 💪 #IndianFootball ⚽ pic.twitter.com/LCkAhIfPD8

The conversation featuring him, along with eminent referee Rowan Arumughan, is set to premiere on the official Indian Football Facebook page and YouTube channel on November 13, 2020 (Friday) at 3.30 PM IST.

Rowan, who has over two decades of high-level refereeing experience to his credit and was the referee for the memorable International Friendly between Argentina and Venezuela in Kolkata in 2011, stated that the relation between the officials and coaches is one of mentorship.

"The refereeing coach is not a teacher but just like a mentor. This is like a friendly way of communicating with the referees and helps understand better as to what is required, how to get it done and to be at the right place at the right time,” Rowan stated.

“He monitors the performance for maybe the whole season and has the whole record, and thus he can provide personalized advice that has been given to that specific referee. At any point in time, the referee coach will be able to give a much better idea and much better data.”

Ravishankar affirmed the intention to invest into this new concept and shared how during Hero ISL games, coaches from the Professional Game Match Officials Limited (PGMOL) Group helped referees, which helped formulate the idea of appointing coaches for referees.

"In the Hero ISL matches, there have been PGMOL coaches coming in from London. They come to do a number of matches, submit reports to the referees' department, which is shared with the referees. It’s a worthwhile concept because they would give video clips and show supporting documents along with advice. There was never criticism and they would always show areas of improvement.”

“The best thing was that the previous reports were shared with the next coach who came to evaluate the referees and as he compares them with the earlier reports, we come to know who is on the upward trend. So that put the idea in our minds," he explained.

In recent times, a number of fresh faces from India have been inducted in the FIFA Panel of referees and Ravishankar detailed how the process works, the hard work that goes into entering the esteemed panel and termed it as a “prized possession.”

“While fitness and experience are paramount, in the last few years, we have also taken into consideration an evaluation of the referee’s performance in the local domestic matches -- how his or her contribution is and what the efforts are,” Ravishankar maintained.

"Every member was given the statistics about every match of all the referees and the referees have also been told what comes in the criteria. They need to do minimum 20 matches per season and they need to have an average minimum 8.2 score in every match. If FIFA says 10 rounds of fitness are to be done, we prescribe them 12 rounds. Since you are a FIFA referee, you have to do something special to be counted in the top 18 in a 130 crore population. It is an honour to be holding the badge and they need to earn it because it is a very, very prized possession."