Developing The Game
Gostha Pal Golden Baby League drives impoverished children to ‘stay away from drugs,’ and move forward together 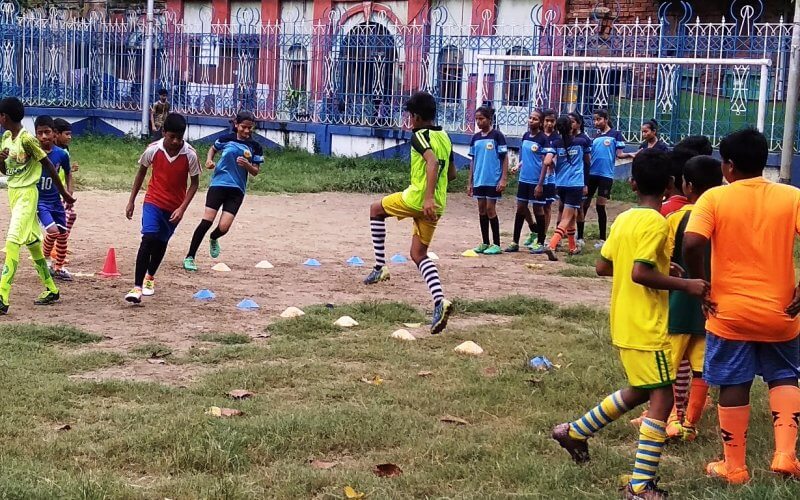 NEW DELHI: What started as an informal gathering of a few people trying to the organise a football tournament for little children has now bourgeoned into something much bigger in the heart of the City of Joy, in the form of the ‘Gostha Pal Championship Golden Baby League.’

Named after the first footballer to receive the Padma Shri Award, the Gostha Pal Championship under the aegis of AIFF’s Golden Baby Leagues, attempts to look beyond the realm of tinkle-toes and juggled footballs.

Samsul Alam, who is one of the operators of this league believes that the efforts to inculcate more children into the realm of the beautiful game has helped improve their lives.

“We are basically a group of youths from our locality (in Central Kolkata), and our main aim was to help give a direction to the children in an age when there are so many distractions available for them all around,” said Alam.

“Whether it is the addiction of video games on the phone, or the spiralling addiction of alcohol or drugs, children, especially those on the streets are not safe from it,” he continued. “But football, we have found, is a good way of diverting them from these things and giving them a new direction in life.”

With over 400 children participating in the Gostha Pal Championship, the league organisers have managed to divert a number of children from the streets to the pitch.

“Most of the children who play in our league are from poor backgrounds. Living on the streets does give you a certain harshness, and you could see that in the way these children would speak,” said Alam.

“But it’s been around two years since we have started the league now, and we have noticed a marked difference in the way they speak. It is because of football that they have learnt to respect their opponents, and by extension, the people around them in their daily lives as well,” he continued.

One such child is Aditya Das, who has recently done well for himself on the pitch, earning many accolades from the coaches around him. Hailing from a family of kachori-makers, excelling in football has become an important thing for not only Aditya, but his father Dinanath as well.

“I used to play in local tournaments when I was younger. But then I had to take over my father’s kachori-shop to feed our family. I’m happy to see that my son has also taken after my passion for football,” said Dinanath.

“Most of my customers throng to my shop early in the morning or in the afternoons, especially on weekends. That is why I am never able to visit my son’s matches or practice sessions. But I would like to see him pursue his dreams of football. They’re not just his dreams but mine as well. It would be great if he can live my dream someday and become a professional footballer,” he further stated.

Former Blue Tigers captain Gostha Pal, who was a fan favourite in the Kolkata Maidan had earned his name in the ‘Beautiful Game’ as a towering centre back, who would repel even the most fearsome of attacks.

His gargantuan size earned him the name ‘Chiner Pracheer’ (The Great Wall of China).

The organisers of the Gostha Pal Championship Golden Baby League have taken it upon themselves to educate the 400-odd children about one of the greats of Indian football, and how he struggled to make a positive impact on society.

“We have helped several camps in our locality to help the children on the sidewalks and slums, with a lot of help from their parents and guardians, of course,” said Alam.

“By now, they know all about the life and struggles of legendary footballer Gostha Pal. We believe that posing such great examples in front of them will help develop their personality in their formative years. After all, it’s not just in football that we need to move ahead. We need to move forward together in the other aspects of our lives as well,” stated Alam.