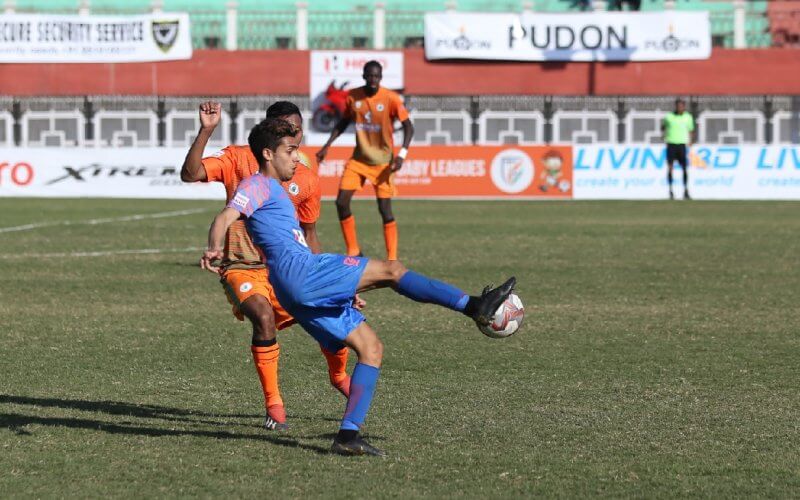 Imphal, February 11, 2020: TheHero I-League encounter between Neroca FC and Indian Arrows ended in a stalemate at the Khuman Lampak Stadium on Tuesday, February 2020. The match saw a very strong performance by the Arrows, who stood up to the Neroca attack inch-by-inch. Neroca, with the draw, now climb up to the eighth spot on the points table having 12 points from as many.

The first half of the match between Neroca FC and Indian Arrows turned out to be much less to the liking of the home fans. The young Indian Arrows showed immense resilience and were looking very difficult to break down.

They resorted to a possession-based game and because of the same, ended with 52 per cent of the ball. Though the possession didn’t convert into goals in spite of having seven shots; only one was on target which came from a free-kick by Ayush Adhikari in the 42nd minute. The shot was directed straight at the Neroca Captain Marvin Devon Phillip in the goal who wasn’t troubled.

The half that saw a lot of battles in the midfield and fewer goal-scoring opportunities ended on parity at 0-0.

The first major opportunity came in the 49th minute from a long throw for the Arrows. Vikram Partap got a clear header but it lacked direction and went over the goal.

Neroca were tried to break the deadlock and an opportunity came knocking on the door. Neroca’s winter transfer, Imran Khan, flicked the ball into the Arrows box and second-half substitute Ronald Singh latched on to the ball and put it past the Arrows keeper, but a goal-line clearance by the defence saved the day for the visitors.

Arrows were also making more progress in the match as the Neroca defence was opening up time and again. In the 62nd minute, it was Ayush Adhikari with a perfect through ball, which found an unmarked Suranjit Singh’s run, but the young winger’s shot went past the far post and Neroca lived to fight another day.

In the 80th minute, a major chance now came the way of the home side as the Ghanaian, Philip Adjah came up with a long-distance shot which was heading towards the top corner, but an acrobatic Jongte denied him a stunning goal.

The last few moments of the match belonged to the young Arrows. In the 82nd minute, Rohit Danu was one-on-one with Marvin Devon Phillip, but his strike was brilliantly saved by the Neroca Captain. The last major action of the game came in 90+6’, when a through ball by Ricky Shabong found the run of Vikram Pratap on the left flank and the latter came up with a low shot on the near post but was again denied by the Neroca keeper.

The match finally ended all square at 0-0 and both teams take one point each from the encounter. Indian Arrows goalkeeper Jongte walked away with the Hero of the Match award was his stellar show in between the sticks.