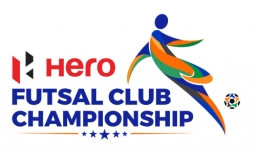 The highest-placed team from each group will make it to the semi-final stage, which will be played in a knockout format amongst the four teams. The winners of the tournament will be the first-ever futsal champions of India.