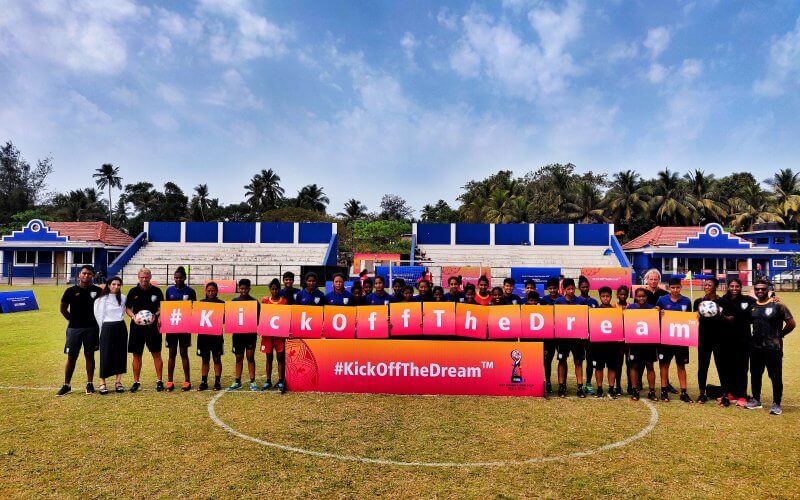 In a unique moment in the history of Indian football, three generations of Indian women footballers gathered at the Benaulim Grounds in Goa today to celebrate International Women’s Day on March 8.

In an event organised by the Local Organising Committee for the FIFA U-17 Women’s World Cup India 2020, current and former players were seen inspiring the future. Former Indian Women’s Team Captain and Padma Shri Bembem Devi, and current captain Ashalata Devi were amongst those who interacted with the India U-17 Women’s squad and more than 100 girls from schools and NGOs around Goa.

Bembem Devi and Ashalata Devi too shared their experiences with the U-17 squad who are likely to be amongst the first Indian female players to take part in a FIFA Tournament, as well as with the other attendees.

“It is very heartening to see everyone out here today to celebrate International Women’s Day and Indian women’s football. It is clear today and very encouraging that the game has been on the rise since I started playing. I am sure that the whole nation will rally around and support the team in November when they take the field and they will then prove to be inspirations for the next set of kids who will choose to take up the game. The future definitely looks bright for women’s football in the country,” said Ashalata Devi.

One of the highlights of the day was to see Precious Dede, India’s U-17 goalkeeping coach and four- time FIFA Women’s World Cup participant with Nigeria, give a goalkeeping masterclass to the attending NGO and school children.

LOC Tournament Director Roma Khanna said, “With India hosting the FIFA U- 17 Women’s World Cup later this year, we wanted the girls to get a glimpse of what it takes to be a professional footballer. It was great to see so many young faces on the football field, and you can see that they enjoyed themselves. I hope we have managed to inspire a few of them to take up football professionally. I would like to also take this occasion to also ask parents to encourage their children to take up football, they can go on and represent their country at a FIFA World Cup!”

FIFA U-17 Women’s World Cup India 2020 is going to be held in Ahmedabad, Bhubaneswar, Guwahati, Kolkata and Navi Mumbai.

Women Football Will continue with the same approach, says upbeat ...