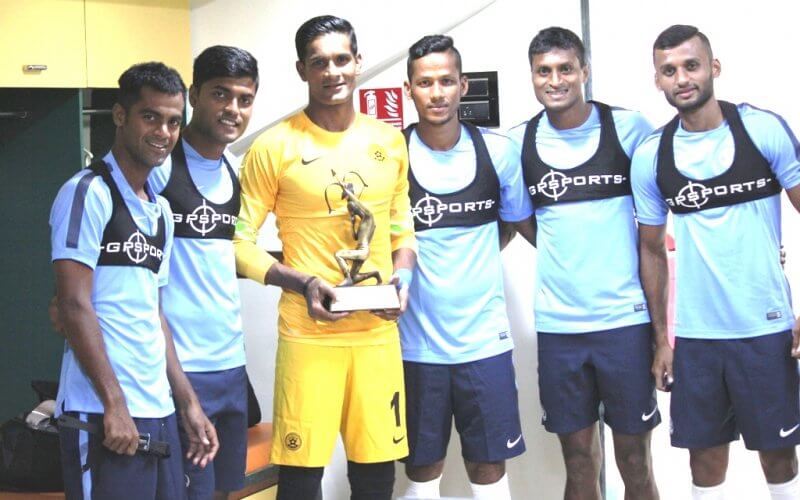 NEW DELHI: Every one of us has our own 'star-struck' moment and the 'fan' within ourselves nourishes that in a golden frame throughout life -- even after growing leaps and bounds to become a celebrity by one's credentials.

Pritam Kotal, even after being a regular member of the Blue Tigers since 2015 feels as excited as ever while revealing his days of bunking schools to witness Mistu-da's (Subrata Paul) glove work from close quarters, within a stone-throwing distance from his home.

"We used to come to know one or two days prior when Mistu-da would come to Uttarpara for practice. He was a rockstar then, everyone's hero. For me, my classes could wait but his training sessions couldn't," Kotal mentioned in a live chat with AIFF TV.

Subrata Paul, who had already made his International debut by then used to travel to Uttarpara for some gruelling training sessions under his the-then coach Debasish Mukherjee, former India custodian. To make the session more challenging for the 'Spiderman,’ Mukherjee used to wet the ground. There came the young boys to lend a hand.

🗣️ @pritamkotal20: "Probably it was my destiny and I'm grateful to the almighty for this 🙏🏻. @thesubratapaul da has seen me since my childhood ☺️. He knows me more than anyone else and making my International debut under his captaincy is probably the perfect blessing that I could have ever expected 🤩." . #IndianFootball ⚽ #BackTheBlue 💙 #BlueTigers 🐯

"Pritam (Kotal), Shouvik (Ghosh) and Narayan (Das), clad in their shorts and tees, used to hover around. They were school-going kids then," Paul smiled.

"They didn't need to be asked. These kids volunteered to splash water on the pitch. Sometimes, their enthusiasm over flooded the ground but the zeal was pure. Often I used to practice a few minutes with them after the formal training got over,” Paul recollected.

Kotal added: "We used to nag and tease him a lot that we would score past him. Mistu-da was kind enough to allow us a few shots after his training and those shooting practices were pure gold," Kotal's eyes glittered.

Incidentally, Pritam Kotal made his International debut under Paul's captaincy in the qualifiers for the FIFA World Cup Russia 2018 qualifier against Nepal – a match which India won 2-0, courtesy a brace from Sunil Chhetri.

"Probably it was my destiny and I'm grateful to the almighty for this. Mistu-da has seen me since my childhood. He knows me more than anyone else and making my International debut under his captaincy is probably the perfect blessing that I could have ever expected," Kotal sounded emotional.

Meanwhile, Subrata’s obsession with training is not unheard of and Kotal revealed an inspiring anecdote about the gloveman. "One day, before we headed for the training session, I heard some unusual repetitive sound. Narayan (Das) and I found it unusual and tried to find what was happening. You won't believe what we saw next!" Kotal took a pause.

"Bikash (Jairu) was Mistu-da's roommate. We saw him sitting outside the room and smiling. Mistu-da was practising his gripping so he could deliver his best during the ensuing training session. Such is his dedication! Even during the lockdown, he underwent three training sessions a day, that too indoors. His motivation level is something else. If he's not your role model, then who would be?"