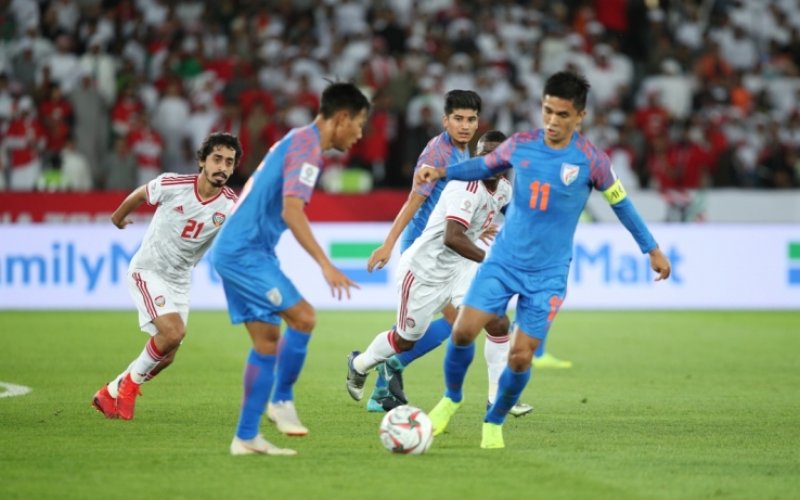 ABU DHABI: Aiming for qualification from the group stages, the Indian National Team ended up on the losing side going down 0-2 to hosts United Arab Emirates in their second Group stage match of the AFC Asian Cup UAE 2019 at the Zayed Sports City Stadium in Abu Dhabi.

It was a day when the Indians hit the post twice in the second half and muffed two in the first-half. Alhamsi’s 40th-minute strike much against the run of play, and then Ali Mabkhout's 80th-minute goal played villain on a night where the Blue Tigers gave the hosts the scare of their lives from the first minute itself.

It just seemed like fate did not allow India to score.

In the first half, India could have almost sealed it. The Blue Tigers started with an attacking intensity, and although lacked possession, chances came in bright and plenty.

India could have surged into the lead as early as the 8th minute when Sandesh Jhingan got a free-header off a corner kick but headed it wide.

Three minutes later, the Arab custodian Khalid Bilal pulled out a world class save to break Indian hearts and deny Ashique Kuruniyan’s shot from close range after Sunil Chhetri had put him through.

If that wasn’t enough of a goal scoring chance, skipper Chhetri was handed a golden opportunity in the 23rd minute. Chhetri was found in the box by Anirudh Thapa but his header went straight to the rival Goalkeeper.

Had India taken these chances, the Blue Tigers would have been up 3-0 in less than thirty minutes -- such was the intensity of their counter-attacks which was promoted through the defensive solidity at the back.

With India unable to take their chances, UAE scored against the run of play in the 40th minute. Khalfan Alhamsi took advantage of a slight miscommunication in the Indian defence and found the back of the net through a chip from a tight angle.

India had another chance to open their goalscoring tally after the UAE defence fluffed a routine clearance providing Sunil Chhetri with a tight angle to score. Chhetri’s placement went inches past the goal as India failed to capitalize and went trailing into the breather.

Changing over, the chances kept coming for India. In the 53rd minute, Jeje Lalpekhlua, who was brought on as a substitute for Halicharan Narzay, tried to slyly chip past the goalkeeper from range after a failed clearance fell to his chest. His shot, however, went past the goal and the UAE goalkeeper.

In the 55th minute, the Blue Tigers rattled the crossbar after Udanta Singh’s shot kissed the bar and went away, following a one-two with Sunil Chhetri inside the box.

In the 73rd minute, however, UAE skipper’s Alhammadi’s shot rattled the left post.

But they had the last laugh when in the 88th minute, Ali Mabkhout breached India's defence and found the back of the net to take it beyond India’s reach.

A desperate India went all out and UAE had another close shave when Sandesh Jhingan’s header off a Rowllin Borges’ free-kick bounced back off the bar.