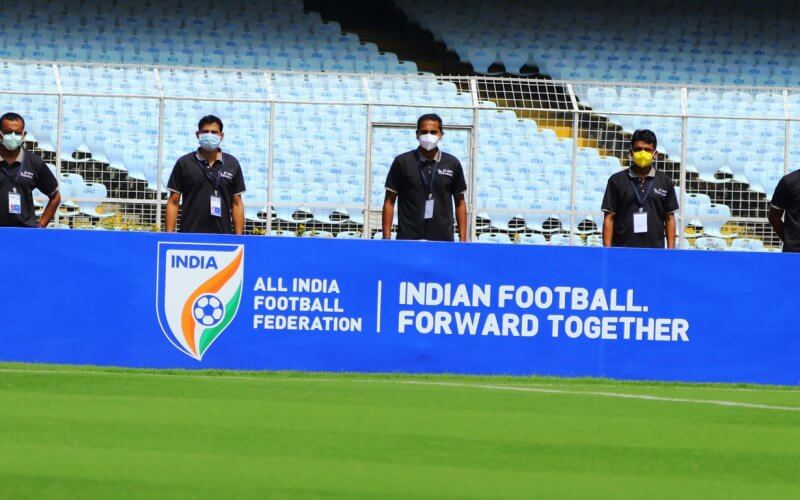 KOLKATA: The ‘new normal’ of football has set in with the Hero I-League Qualifiers 2020. Following the strict COVID safety guidelines, those operating in and around the tournament have already conducted four successful matches, two each in Kolkata and Kalyani respectively.

While all the five teams – Garhwal FC, ARA FC, Bhawanipore FC, Mohammedan SC and FC Bengaluru United – have made their own adjustments to adapt to the new rules and regulations for their own safety, there is yet another team that is quietly working away behind the scenes, making sure all the matches are run smoothly – the Referees.

“This is a unique experience for us all. But we have to adjust because football action has finally come back to India. We are proud to be a part of the tournament that has brought football back, in fact, bring sports back in India. It is up to us to manage. All are ready to accept the COVID safety regulations and move forward together,” referee Santhosh Kumar, who has been officiating in the tournament, said.

There has been a significant change to how the referees need to approach a game of football with regards to the build-up to a particular game, in order to comply with the COVID-safety guidelines that have been put in place for the tournament.

L Ajit Kumar Meetei, who was awarded the AIFF 2019-20 Award for the best Referee explained his pre-match routine during the times of the ‘new normal.’

“The pre-match preparations have changed. Now we have to follow the social distancing guidelines set by the Federation. Before, we would go out and check things like the goalposts, corner flags, goal nets,” said Ajit Kumar. “But now due to the sanitisation procedures, we cannot go out for these checks unless they are all sanitised and it is safe for us to come out and conduct these checks.”

Meetei further explained that while previously the referee and the Match Commissioner would go to each dressing room to check the identity and equipment of each player, that same process is done differently now, in order for the match officials to maintain social distancing norms.

“Due to the new SoPs, we would call the players up to the technical area to check their equipment. We would not be able to maintain social distancing in the dressing room. So now we have to do this on the Field of Play in order to maintain ample distance,” he explained.

He further went on to explain that the once the teams walk out for the match to the FIFA anthem, the pre-match formalities like handshakes are called off at the present moment. Even the team photos are taken with ample distance being maintained between the players.

“Before kick-off, we have the team line-ups and the team photos which of course need to be conducted keeping in mind the social distancing norms,” said Meetei with a smile.

While there is not much change once the match gets underway, there is one new rule to help the teams overcome fatigue which may set in earlier due to the fact that some of their players may not have been able to start training as early as they would have wanted to.

While each team can make five substitutions in a game, there is a very specific pattern in which these substitutions can be made, explained referee Raktim Saha.

‘A REFEREE MUST ALSO MAINTAIN FITNESS’

While the different teams have used technology to train together over video conferencing, the referees themselves also have had to adapt to similar routines during the COVID-19 Lockdown.

“Fitness is one of the most important things for us. It was indeed a challenge to maintain our fitness during the lockdown when we could not go out and train,” said Santhosh Kumar.

“You have to understand, that these players are extremely fit. We as referees have to keep up with their pace in order to be in the right position to make the right calls. If we are not at the same level of fitness as these guys, we would not be able to keep up,” he explained. “The teams get two extra substitutions to deal with fatigue, but we get no such thing. In a way, we have to be fitter than the players.”

Santosh also praised the AIFF for keeping the referees on their toes during the lockdown as they kept training at home, as well as kept themselves apprised about the Laws of the Game.

“Not only did we keep ourselves fit. We also attended seminars arranged by the AIFF to help us keep abreast with the changes made to the Laws of the Game. It’s all well to study the new Laws. But if you are not putting them to use in matches on a regular basis, then it becomes difficult,” he stated. “That’s where these seminars were very handy.”

Raktim believes that despite the setbacks during the COVID-19 Pandemic, Indian football has now fought its way back.

“Indian football is growing. We were closed for 8 months but we still kept attending the courses and kept our fitness intact. Now that Indian football is back, and we are all moving forward together despite the pandemic, so it feels really good,” he maintained.