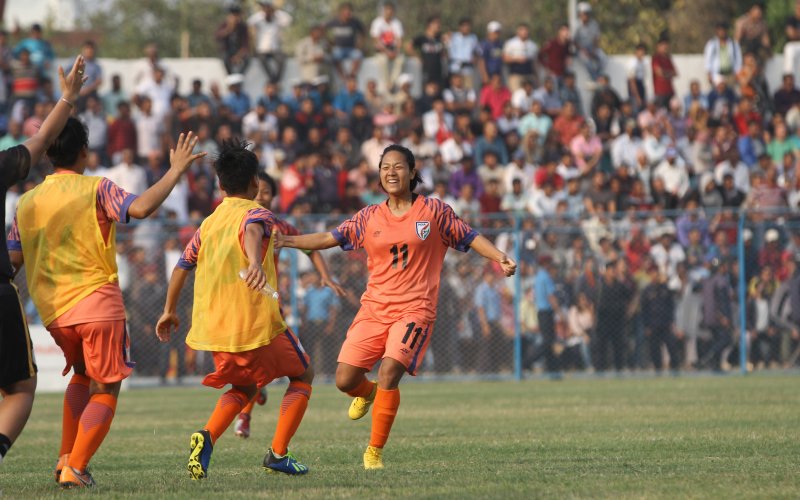 NEW DELHI: In a candid conversation on AIFF TV on Sunday (December 27, 2020), Indian women's national team winger Dangmei Grace, who hails from Bishnupur in Manipur, spoke about the sporting culture in her home state and how sports is “in the blood” of all Manipuris.

"Our inclination towards sports comes from our forefathers. We have a strong belief that we have sports in our blood. Manipur has produced so many Olympians and legends, and even if we don't have the best infrastructure or facilities, we are very much attached to all kinds of sports."

"This is why everyone says that Manipur is the powerhouse of sports. Our body structure is quite different from other players. Our agility and speed are very good," she said.

Blue Tigers midfielder Amarjit Singh Kiyam, who captained the Indian side at the historic FIFA U-17 World Cup in 2017 and also comes from the state of Manipur (Thoubal), had earlier mentioned in an AIFF TV chat as well about how everyone plays and follows different kinds of sport in the region.

"Everyone loves sports in Manipur, be it football, hockey, boxing or wrestling. There are lots of games that are popular here in Manipur and everyone follows them. There are many Olympians from Manipur, such as the captain of the Indian women's hockey team at the Rio Olympics (Sushila Chanu) and of course, everyone knows about the legendary Mary Kom," the 19-year-old mentioned.

He also talked about how the U-17 World Cup sparked a paradigm shift in the mindset of the people in the state and how quickly football is growing in popularity.

"There is a sporting culture here in Manipur, especially in football. Whenever I come home I can see that in every corner and every ground, people are playing football. After the FIFA U-17 World Cup, small kids -- even as young as 6 years old -- have started playing football, with their parents supporting them. We often talk about European football culture and now, it has started here in Manipur too. The growth is happening and everyone is mad over football," Amarjit quipped.

Women's national team stalwarts Bala Devi and Ashalata Devi too belong to Manipur and had previously spoken on AIFF TV about their formative days, with the Rangers Women's FC striker Bala talking about how her father helped her develop a passion for the beautiful game and Ashalata recalling how she also tried her hand at handball before making the switch to football permanent.

"I used to play with local boys at the start and initially, there were many people who were not in favour of girls playing and wanted me to study instead. However, my father was a footballer and a striker too, and he never stopped me. He taught me a lot. He told me to always keep a football in my hand and even when I sleep. I used to imagine kicking the ball while going to bed and that's the passion I have for the game,” Bala stated.

"I was not into as many sports when I was younger but I did start to play handball. It was good but the enjoyment I would get playing football -- I couldn't get in any other sport. Hence, I decided that football was best for me and focused on it completely," Ashalata, who has nominated for the AFC Women's Player of the Year in 2019, stated.