News
MS Dhoni's 'aggression' has had a positive influence on my game, quips Anirudh Thapa 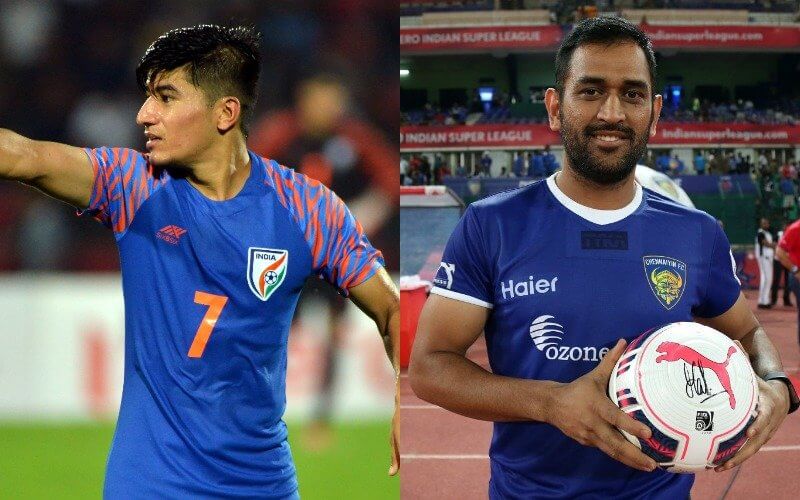 NEW DELHI: In an interview with www.the-aiff.com last year, Blue Tigers skipper Sunil Chhetri had revealed how he drew inspiration from the legendary boxer MC Mary Kom and had termed himself as “her biggest fan.”

This time around, it was youngster Anirudh Thapa who talked about learning from another Indian sporting icon -- former India cricket captain Mahendra Singh Dhoni.

In a live chat with AIFF TV, the 22-year-old spoke about how Dhoni's "aggression" impresses him the most and even influenced his style of play on the football pitch.

"I have always enjoyed watching Dhoni play because of the style he has. The aggression -- I really like that. It has influenced me in my game too, as football is a game where you need to be tough and aggressive,” Thapa smiled.

“Watching him hit those powerful shots and big sixes -- it has had an effect on me and helped me to into those 50-50 challenges fiercely and win them," Thapa averred.

🗣️ @thapa.42: I was disappointed to hear that he had retired and he'd no more play for @indiancricketteam 🇮🇳, but fortunately I can still watch @mahi7781 play for @chennaiipl in the @iplt20 🤩 #BackTheBlue 💙 #BlueTigers 🐯 #IndianFootball ⚽

It was in August this year that Dhoni announced his retirement from International cricket. However, Thapa mentioned that he is looking forward to seeing him play in the upcoming edition of the Indian Premier League.

"When I heard the news of his retirement, I was obviously very sad because I’m a big fan of him. Hopefully, I can watch him play in the IPL this time," he quipped.

The midfielder has made 55 appearances for Hero ISL side Chennaiyin FC and was part of their title-winning side in the fourth edition of the competition. He talked about how Dhoni, who is also the co-owner of the same team, would speak to the players and motivated them.

"Dhoni is a very humble man, besides being a great person who is always motivating us and sharing his experiences. At team lunches, he would come up and talk to us. He has seen so much in life and all of us are aware of his background. So what he told us made a big difference. It was amazing to gain that experience and it was truly a fanboy moment for me," Thapa recalled.

He also shared how Dhoni's humility wowed him and a group of young players at Chennaiyin.

"I remember that after one particular lunch everyone was leaving and some of the young players came up to him to speak to him and ask for his autograph. Other people were calling him but he insisted he will talk to us. He gave us his time and shared his experiences with us. That was the time I realized how humble he is. It is one of the biggest positives I have seen and learnt from him.

Dhoni's words of wisdom have surely had a positive impact on the young midfielder but in the live chat, Thapa offered some valuable tips for budding footballers himself.

"You need to understand the game of football. If you understand it, playing it becomes a lot easier. You need to be acquainted with basic things such as your first touch, passing, positional sense, always checking over your shoulders, etc. If you learn or master these basic things, which are not taught but still are very important, you can play football well. All these things are interconnected with each other."