News
I believe that my boys can do well in the group: Bibiano Fernandes 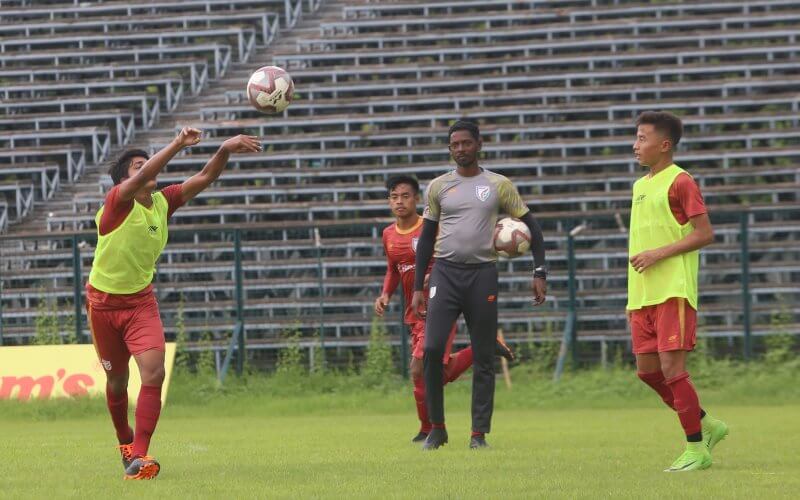 NEW DELHI: India U-16 national team Head Coach Bibiano Fernandes sounded positive about the ‘tough draw’ for India’s campaign in the AFC U-16 Championship Bahrain 2020, reiterating his belief in the ability of his boys to perform at the big stage.

In a live chat with AIFF TV, Bibiano said: “I was following the draw live but I did not keep any expectations for it. When I saw our group, I told myself that my team has already given a good account of themselves in qualifiers. I believe from the bottom of my heart that these boys can perform against the countries in the group.”

The draw which was held at the AFC House in Kuala Lumpur, Malaysia on Thursday (June 18) saw India being clubbed alongside Korea Republic, Australia, and Uzbekistan in Group C. India had in the last edition in 2018 lost to Korea Republic by a solitary goal in the quarterfinals wherein a victory would have earned them a slot in the FIFA U-17 World Cup.

However, Bibiano dismissed notions about the match against Korea Republic to be a ‘revenge match.’

“It looks like that -- doesn’t it,” he laughed. “But Korea will also think on the same lines. What’s important at this stage is how soon we can get back to training. The boys need to hit the right chords before the tournament starts.”

“There are so many things you can learn. The way you look at the tournament and change your approach is one of them. We learnt from our experiences from 2018 and have hence, changed and instilled the learnings while scouting these boys, and also in training.”

With all footballing activities in India under the aegis of AIFF staying suspended and with the subsequent lockdown from March onwards (for over a month) having forced all to stay indoors, Bibiano has been in touch with the boys via online sessions.

🗣️ @23ibiano: The boys already gave an account of themselves in the #AFCU16 🏆 Qualifiers. And deep in my heart ❤️, I do believe that these boys can perform on the big stage 🤩#BackTheBlue 💙 #StarsOfTomorrow 💫 #IndianFootball ⚽ pic.twitter.com/Dvqv5I0i3C

“It’s been difficult for the world. Everyone is finding their way to cope up. I know a few countries who have already started training. We have been in touch with the boys via online sessions -- thrice a week -- strength, goalkeeping, ball mastering session. We have watched U-16 matches and have been analysing and discussing with the boys,” he informed.

While Bibiano is often dubbed as the mastermind behind the success of his current team that has gone on an 8-match unbeaten run in International football (five wins in SAFF U-15 Championship, and two wins and a draw in the AFC U-16 Championship Qualifiers), the coach lauded his support staff along with AIFF for giving the boys the platform to go out and perform day in and day out.

“I’m just the face. My support staff has been with me for four-five years now, and they have been working very hard behind the scenes. They are passionate about their work, and they really take care of the boys. That’s why these kids are playing so well,” he said.

“I’d also like to thank the staff working from the Football House in Delhi to make sure that the team gets everything it needs. We never run short of anything. I’ve literally got everything I’ve asked for so far -- be it longer camps, more matches, exposure tours. They are all behind the success of this team.”