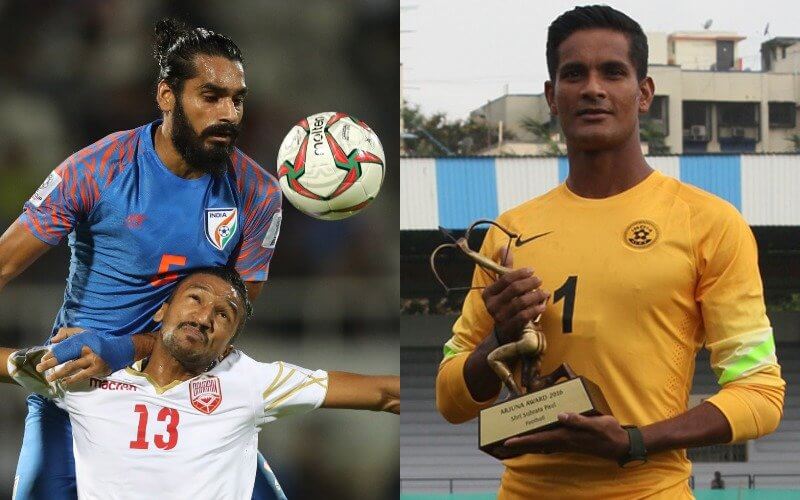 NEW DELHI: As Sandesh Jhingan was named the 27th footballer to win the prestigious Arjuna Award, his predecessors congratulated and “welcomed” him to the “elite Arjuna club.”

Mercurial striker and captain Sunil Chhetri who received the Arjuna Award in 2011, and the Padma Shri in 2019, expressed his delight on Sandesh being among the award-winners this year and termed him as a "great role model" for the next generation.

“Welcome to the Arjuna Club,” Sunil Chhetri said in his message to Sandesh Jhingan. “I wanted to be the first one to congratulate him when I heard the news. So I called him up and we had a hearty chat,” the Indian captain stated.

“He is the perfect example of the new generation of Indian players – fearless, ambitious, and constantly willing to upgrade himself. He is a great role model for youngsters, and is someone whom I trust blindly and feel secured every time we go together for war. Good luck to him, and congratulations,” Chhetri averred.

It was in March 2015 that Sandesh made his debut for the Blue Tigers in a FIFA World Cup 2018 qualifier play-off against Nepal in Guwahati and leading the side on the night was iconic goalkeeper Subrata Paul, who is fondly referred to as 'Spiderman,’ and himself a recipient of the Arjuna Award in 2016.

Hailing Sandesh for his latest achievement, Subrata felt that "the best is yet to come" for the 27-year-old.

"Winning the Arjuna Award is a major achievement for any sportsperson. Congratulations. I hope he takes this award as motivation and continues to perform for his country and club, and bring more and more success," Subrata expressed.

"Sandesh being conferred the Arjuna Award indicates how good his performances have been. Since 2014, he has been improving and constantly growing as a player. However, his best is yet to come,” Subrata opined.

It has been back-to-back Arjuna Awards in the sport for Punjab Football as in 2019 it was Indian National Team goalkeeper Gurpreet Singh Sandhu who had received the honour.

Both Gurpreet and Sandesh hail from Chandigarh and their duo has been a crucial mainstay in the Blue Tigers backline in recent years, playing a vital role in a number of memorable performances and triumphs.

Gurpreet congratulated his colleague on the "incredible achievement" and mentioned that “Sandesh's confidence on the field has been a standout feature.”

"Congratulations to Sandesh on this incredible achievement. It is a huge moment for your family. You have done them and all of Chandigarh proud. I hope you continue the way you have. You still have so much to give to Indian football," said the 'Wall.'

"Sandesh has been really good and consistent over the years and has become an integral part of the team. The way he has played for us over the years and has led young footballers is amazing. What I like about Sandesh is his confidence. On the pitch, it has never changed. He likes the leadership role and tries to carry everyone around him, which I admire,” Gurpreet quipped.

Meanwhile, Subrata also shared a special message for Sandesh and encouraged him to continue working hard with "dedication and honesty".

"He knows how much I like him. When we were roommates, I used to tell him the same thing and I would like to reiterate it again. 'Karm karo, phal ki chinta maat karo' (Work hard without ever worrying about the result),” Subrata smiled.