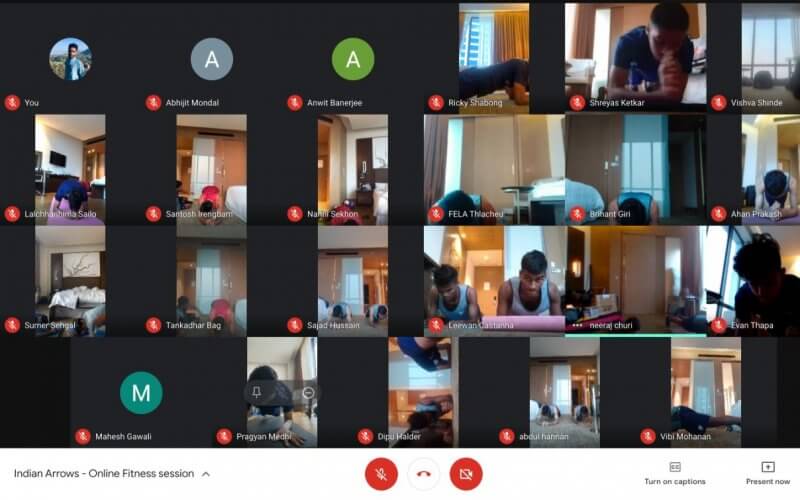 KOLKATA: With the start of the Hero I-League 2020-21 campaign around the corner, the Indian Arrows have been training hard during their quarantine period to stay in top shape as they get set to resume training and prepare for their first league game of the season. Even though they are confined to their respective rooms, players have been taking part in virtual fitness sessions through video calls which will be vital for 'retaining fitness levels', according to head coach Venkatesh Shanmugam.

He told i-league.org, "With the quarantine period coming up after a few weeks of training, it was important that we retained the fitness levels the players had achieved and for that, we have been organizing daily virtual fitness sessions via video conferencing, which are monitored by the technical staff. The boys have been actively taking part in these sessions and taking measures to ensure that they remain in the best possible condition."

It was on December 26 that the Arrows began their mandatory seven-day quarantine period ahead of the Hero I-League and Venkatesh spoke about the various steps taken to ensure that the players stay in shape during this time.

"Even though we cannot step outside our rooms, it is vital that we continue working in whatever ways possible to keep the players in good shape physically and mentally. We have daily morning screening where we cover various aspects such as soreness, motivation, quality of sleep, etc. and along with the fitness sessions, we have given one football each in every room and encourage the boys to keep working with it to maintain their touch of the ball."

"They have been provided various fitness equipment as well such as stretching bands, medicine balls and yoga mats, which allows us to have different types of workouts to keep the players engaged. They have to follow a fixed routine over the day and are encouraged to keep off their beds as much as possible, in order to counter laziness," he averred.

The head coach added that the staff has been working to find 'innovative' methods to keep the players active during the quarantine period.

"The quarantine period has really kept us on our toes and we have been working actively to find solutions and innovative methods to keep the boys in the best possible conditions. We have separate video sessions where we organize friendly juggling competitions so that they can interact with one another, which helps the team come together as a unit and keep their spirits high," Venkatesh mentioned.

The Arrows began training for the first time since the lockdown on November 20 in Bhubaneswar with support from the Government of Odisha, before reaching Kolkata on December 3, where they contested in the IFA Shield and faced off against Southern Samity and George Telegraph.

"The team has been shaping up really well since we began our camp in Odisha, which was a great success and helped us obtain a perfect start to our preparation -- thanks to the support from the Odisha Govt. In Kolkata as well, we continued training and got some important game-time as well during the IFA Shield. Now, once the quarantine period gets over, we are hoping to hit the ground running to get ready for our first game of the Hero I-League," Venkatesh said.

The Indian Arrows get their Hero I-League campaign underway on January 10, 2021, at the Kalyani Municipal Stadium as they face off against Churchill Brothers FC Goa, with kick-off slated for 7 PM IST.