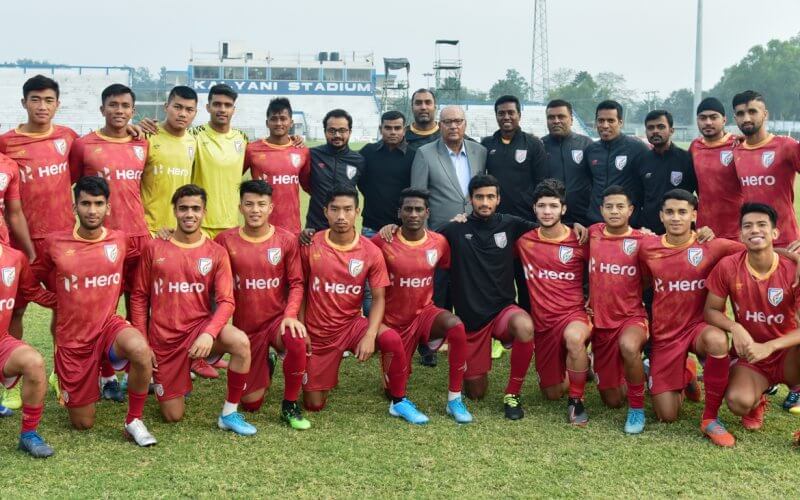 NEW DELHI: Indian Football legend Subhash Bhowmick and Arjuna awardee Deepak Mondal asked the young Indian Arrows to “enjoy the moment and learn from mistakes” during their visit to Kalyani before the youngsters challenge Mariners in the Hero I-League on Thursday (January 9, 2020). The stalwarts paid a visit during Indian Arrows’ training session at the Kalyani Municipality Stadium on Wednesday (January 8, 2020).

“Earlier, players had to prove themselves before earning the coach’s confidence to play them against the likes of Mohun Bagan and East Bengal. Because of AIFF’s holistic approach to development, you have got this opportunity early. Enjoy it and try to learn from your mistakes,” the veteran striker opined.

Deepak Mondal, who had played alongside Venkatesh Shanmugam and Mahesh Gawli for Mahindra United and the Indian national team, the coaching staff of Indian Arrows, also reiterated the same.

“You go on to celebrate different festivals across the year. Treat this match in the same way and try to soak in the pressure as much as you can. You’ll get support, you will be cheered from the stands. Just live the moment,” the Arjuna awardee shared.

“It was like revisiting our playing days once again when Subhash-da used to share his insights with us before a match. His experience of playing at the top level is something which these boys can never imagine. That’s what came to my mind and I didn’t think twice about dialling him before coming to Kolkata,” Indian Arrows coach Venkatesh sounded elated having met his old mentor and teammate.

Subhash Bhowmick was an integral member of the India squad when they beat Japan 1-0 in the Bronze medal decider of Asian Games Bangkok 1970. Besides that, he represented the Blue Tigers in Mardeca Cup and other tournaments in the 1970s. As a coach, he has enjoyed a highly prolific career as well — winning the NFL, Hero I-League and Durand Cup trophies over the years.

“I have heard anecdotes from my father about him. He said that Bhowmick sir was like a magician with the ball and his acceleration and shooting ability were almost second to none. Seeing him in person and listening to him before the Mohun Bagan match will be etched in our mind forever,” Vikram, who is brimming with confidence after scoring the equaliser against Neroca FC in their last outing, stated.

“Deepak sir’s presence and his thoughts will always be helpful for us. This training session is something which we’ll cherish for long. We sincerely thank them for taking time out of their busy schedules for us,” he further added.

“I have coached in both clubs (Mohun Bagan and East Bengal). Both clubs have been here for 100-odd years and it’s a learning experience for all of you to play 90 minutes against them, that too here. Utilise it and use it as the stepping stone for your career,” Bhowmick rounded off.