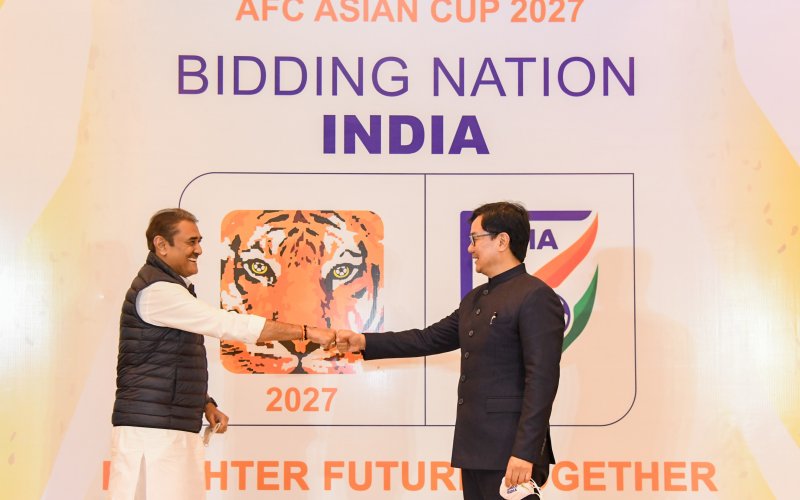 NEW DELHI: The All India Football Federation (AIFF) announced its candidature to host the AFC Asian Cup 2027 in an event in New Delhi on Wednesday (December 16, 2020), which has created an incredible buzz across the nation among various stakeholders, including the players.

Blue Tigers skipper Sunil Chhetri, who has represented the nation at two AFC Asian Cups in 2011 and 2019, stated that hosting the mega-event in India will be the 'best gift' for the supporters and having the top teams from the continent playing on Indian soil will be 'immense'.

"There is no bigger honour and privilege than playing for your country and for our nation to host the AFC Asian Cup 2027 would be even bigger. I think it will be the best gift for the fans and for everyone in the country," he said.

"We have already had the FIFA U-17 World Cup in 2017 in India and it was such a huge success and you can see the prodigies from that tournament do so well. We also have the upcoming FIFA U-17 Women's World Cup in 2022 and I can't wait for it. To get the 2027 Asian Cup and get the best in Asia to come to our country to play would be immense. I wish the AIFF all the very best and I hope we get it," added Chhetri, who is currently the second-highest active international goal scorer.

Iconic national team goalkeeper Subrata Paul, who earned the nickname of Spiderman for his unforgettable performance for India in the AFC Asian Cup 2011, stated that the country is 'ready' to host the tournament and become a 'global football destination'.

"I consider myself very lucky to represent my country and play in big matches in front of our fans. But, nothing is bigger than hosting the AFC Asian Cup 2027. I feel, in the last few years, our football infrastructure and culture has developed a lot and we are ready to host the AFC Asian Cup. I have no doubt that our fans will make it memorable for everyone and make our nation a destination for global football," Paul averred.

As Indian football continues to move forward together, 2022 will see the country host two major international tournaments in the form of the FIFA U-17 Women's World Cup and the AFC Women's Asian Cup, and according to Blue Tigers custodian Gurpreet Singh Sandhu, hosting the AFC Asian Cup in 2027 will be a 'massive' help for the sport in India.

Sandhu, who is the first Indian to play in the UEFA Europa League, mentioned, "Our performances in the last few years have been steadily improving and hosting a big, big tournament like this will help us a lot. In 2017, we saw the FIFA U-17 World Cup being hosted in India and in 2022, the AFC Women's Asian Cup and FIFA U-17 Women's World Cup will be hosted as well. Hosting the AFC Asian Cup in 2027 will be a big boost for us in India and help the sport massively."

Centre-back Sandesh Jhingan, who earlier this year became the 27th footballer to receive the Arjuna Award, said that having the AFC Asian Cup on home soil will be a dream come true for every Indian.

"I saw the support which we got for the AFC Asian Cup 2019 in UAE and it felt like home with all the fans coming to support us. I can only imagine the noise and the buzz if we play the AFC Asian Cup 2027 in Kolkata. It's a dream for every Indian and I hope it gets fulfilled. The entire football fraternity in India will enjoy world-class football in our own backyard. I can't wait for it," Jhingan shared.

The bid logo, featuring a tiger, epitomises India's spirit and ambition to be a leader in football and represents the unique exuberance visiting fans and teams will experience. The slogan, Brighter Future Together, highlights the exceptional opportunity the bid presents for AFC and AIFF to work in partnership and take Indian and Asian football to the next level.

Midfielder Anirudh Thapa, who was named the 2019-20 AIFF Men’s Emerging Footballer of the Year in September, expressed that one can look forward to a 'carnival-like atmosphere' in 2027 should India host the AFC Asian Cup.

"Looking at the length and breadth of our country, and the fact that football is loved all across, we can expect a carnival-like atmosphere for the tournament. I’m sure the organisers, as well as the fans, will leave no stone unturned in welcoming all the teams and giving them a feel of the Indian hospitality. I feel India would be the perfect host for a tournament of such stature," Thapa affirmed.

At the FIFA U-17 World Cup in 2017, it was midfielder Amarjit Singh Kiyam who led the Indian colts and now having made a mark for the senior national team as well, he conveyed that all the players are 'very excited' about the prospect of hosting the AFC Asian Cup 2027.

"It would be a huge privilege to host the AFC Asian Cup in 2027. Ever since the news has come out that India is going to bid for the event, we have seen a lot of buzz and speaking for the players, I can say we are all very excited for the event to take place in India. I am sure our fans will be very excited as well. The AIFF has done a great job in bringing big international tournaments to India and I hope we can pull off AFC Asian Cup 2027 as well," he stated.