News
When the ‘Beautiful game’ conquered a deadly pandemic 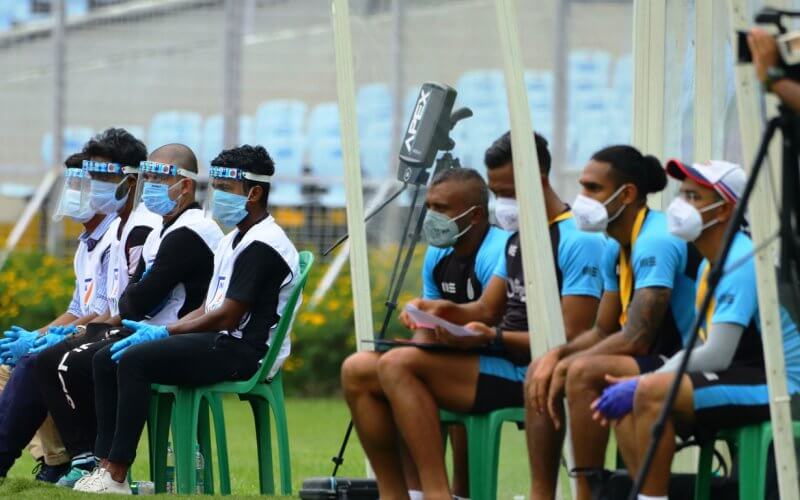 KOLKATA: The Vivekananda Yuba Bharati Krirangan is well known around the world for providing an electric atmosphere to the ‘Beautiful game.’ Having hosted innumerable Kolkata Derbies, the stadium has even played host to the FIFA U-17 World Cup India 2017 final three years back.

But even as Bhawanipore FC and FC Bengaluru United walked out onto the pitch on October 8 to kick-start the Hero I-League Qualifier 2020 -- something was missing – the roar of the fans.

The COVID-19 Pandemic has changed the way we do things, even in football. And unlike the innumerable memorable matches that have been played at this arena, the players now walked out to the ghastly echoes of their own teammates from the substitutes bench.

The only difference was that these substitutes were not in the dugouts – they were seated in the stands, maintaining social distancing. Despite such differences, there was a buzz going around all the players, the coaches, and all of us officials, who were conducting the match – football (and indeed, outdoor sports) was finally back in India!

The new regulations have made a huge difference in the way a match or a tournament is arranged. Everyone has been put in the safety of a bubble environment – one big family fighting the COVID-19 Pandemic and taking Indian football forward together.

The new safety regulations that have been put in place have been strange for everyone involved. Work at the stadium on a matchday generally begins five hours prior to kick-off. However, that would start much earlier now, as teams of workers go around the arena sanitising the whole place.

As I reached the VYBK around five hours prior, I was told that certain parts were still being sanitised, and a safe part was immediately charted out for me to walk to a sanitised section, where I would have to wait till it was safe to come out.

That half an hour was probably the longest wait of my life, as I made innumerable phone calls to different people who I was to coordinate different things with, constantly pacing up and down the empty room.

Once it was safe to come out, I headed to the ‘AIFF Secretariat’ room, beyond which lies the referee’s room and the two dressing rooms.

A stark difference caught my eye. Previously, there would be a policeman or a security guard standing outside each of these rooms, even before the teams or the referees arrived. Now, it was completely empty. Nobody who was outside the COVID safety bubble, not even the cops, were allowed here.

With around two hours to go, we finally received a message on our walkie-talkies – “Bengaluru United have entered the stadium!”

Normally, at this stage, we would rush to the main stadium entry, which is behind the grand Swami Vivekananda Statue that overlooks Gate no. 1. Now, however, the teams entered the stadium from a small door that was adjacent to the wing that housed the dressing rooms.

An AIFF official stood at the door with a temperature gun, taking the readings from every player and team official before they stepped inside. Nobody’s temperature was above the desired levels.

On any other day, as the Media Officer at the venue, I would be scurrying about acquiring enough team sheets for the colleagues in the media tribune. This time, however, the media tribune was empty, and out of bounds to officials like me, who were inside the bubble.

On the pitch outside, the ball boys were furiously spraying away at all the balls that were going to be used for the pre-match warmup, and subsequently, the match as well.

It was rather strange to see everyone on the pitch wearing masks, shields and gloves. In normal times, it would only be the Team Physios and the Medical officials who would be wearing the gloves and perhaps the masks on certain occasions.

Another round of ball sanitisation was done by the ball boys after the warmups were done, as they then proceeded to take their stations, which were much farther back than they would be in normal times.

With just seven minutes to go for the Hero I-League Qualifier 2020 to get underway, and sporting action to finally resume in India, the teams emerged from the tunnel. However, there was a strangeness in this aspect as well. As is the case, it was the referees who first emerged from the tunnel. Following them, were the starting XI of FC Bengaluru United lined up in a single line, followed by Bhawanipore FC in the same fashion. In normal times, the two teams would have lined up side-by-side.

The biggest difference perhaps struck me when both the sides had lined up in front of the centre circle, and it was finally time to call the players for a team photo. I remembered from my past experience of having done the same in the Kolkata Derby nine months back – there were around 78 photographers, who were divided into two groups and herded together in each technical area, with a rope held by eight rope marshals that kept them from pouring onto the pitch.

Jostling against each other, they tried to get the perfect shot of the players, as they lined up for the team photo. However, the array of shutter clicks would be drowned by the deafening roar from the stands. It was truly an incredible sight from out there in the middle.

But this time, however, there were just the two official photographers, who maintained enough gap between themselves and the technical area, as they clicked the team photos. This was indeed a much easier situation to handle, but having grown up an ardent fan at the Kolkata Maidan, I would rather have the more difficult of the two propositions at hand.

Once the pre-match formalities were done and the match finally kicked off, the attention was finally back where it belonged – on the pitch. After all, this is what everyone had worked for.

The Players had trained for weeks ahead of the tournament, the Local Organising Committee had poured over mountains of regulations to get everything in place, everyone inside a safe environment, and so that referee Santhosh Kumar could finally blow the whistle to signal the start of ‘New Normal’ in sports in India.

Once the match was over, however, the focus was again back on the safety protocols. The substitutes of Bhawanipore FC who wanted to rush to their teammates on the pitch and celebrate their 2-0 victory. However, they were held back, as the starting XI first headed into the tunnel, followed by the starting XI of Bengaluru. Then it was the turn of the substitutes to head in. they would probably celebrate inside the dressing room – to move forward together into a new era, where football conquered a deadly pandemic.