News
'We shall be victorious one day' 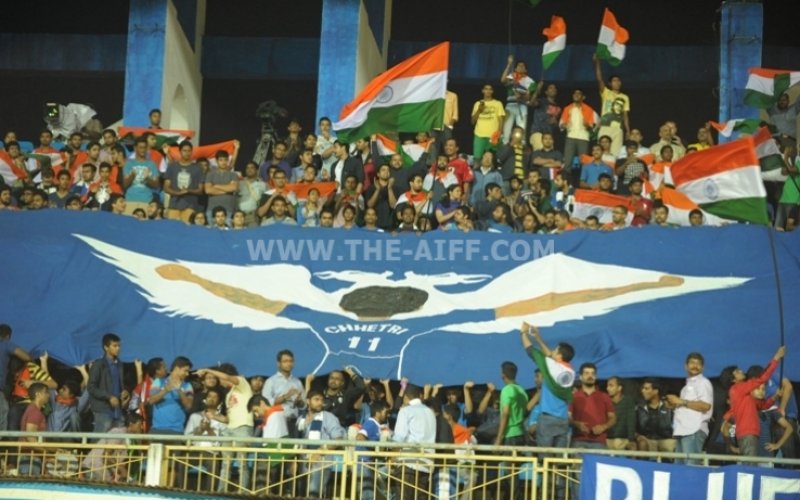 NEW DELHI: George Orwell once said, “Serious sport is war, minus the shooting”; and if Football is such a nerve wrenching, facile affair, then the fans are certainly responsible for creating an intimidating atmosphere, wielding enough power to sway the result of the match by inspiring their Team to a thumping win, an unexpected come-back or sometimes just seeing the match through.

And even in the exhaustiveness of fans, some stand out. Like Galatasaray’s UltrAslan, Juventus’s Drughi and Manchester United’s Red Army, fan support groups solely dedicated to their respective Clubs take matters into their own hands by exhibiting a cacophony for their opponents on match-day - whistling, chanting, singing in an attempt to unnerve the opponent’s players.

Named after their parking position in the Kanteerava Stadium in Bengaluru, similar to that of Lazio’s Curva Sud, the West Block Blues showcased their beating blue hearts for the National Team on the grand stage, first on June 11thwhen India hosted Oman in the World Cup Qualifiers. A jam-packed Kanteerava erupted to every attacking move fostered by the ‘Men in Blue’ with the West Block Blues leading the charge of rooting the National Team.

Come September 08th - India versus Iran - the West Block Blues orchestrated a show to remember as they unfurled a 100 foot long banner of the Indian Captain Sunil Chhetri in honor of his services for the Country and the Club, Bengaluru FC. Not only that, the support group created an intimidating environment for the away Team, Iran, and even after Indian went down fighting 0-3, the West Block Blues continued to show their support for the country by signing the traditional Indian song – “Hum honge kaamiyaab ek din” ( We shall be victorious one day).

As Waseem Ahmed, a proactive member of the West Block Blues describes, the love for the country is what drives a fan and the West Block Blues through during tough times. “We are more than just fans. We are a huge family. Together, we celebrate our victories we stand together when we lose.”

“We chant our hearts out for the entire 90 minutes even if our team is trailing. Solidarity is what we believe in. And this is what we live for!” claims Ahmed.

Donning their India jerseys to create an ocean of blue, with the ‘Tiranga’ in hand and chanting ‘When the Blues go marching in’, the West Block Blues have redefined the definition of an Indian footballing fan, so much so that the support group includes not only includes the young populace of the nation but people from all walks of life including women.

“So no matter what, we will always back the blue and believe that one day we will be victorious”, he added.

It is not only the men who chant their hearts out come match-days, but the women in the support group too cheer with all their might and vigor.

“The sheer passion and determination for the Country and the sport is what drives me to West Block Blues. “We have started a Football revolution in the country and it is great to be a part of it”, said Sanjna Achayya.

And the female populace amongst the support group feels that the onus is on them to extend the outreach of the football craze. “We are working on a plan to reach more Women. Subsidized tickets, match-day programmes, college outreach programmes, and free cab rides are part of our general strategy to get more people involved in the ‘beautiful game”, Sanjna stated.

Not only has the support group been a vocal member in the stands but it has also organized match screenings of the National Team’s fixtures, alongwith spreading the word to support the ‘Blue Tigers’ in colleges, schools and institutions – creating a buzz in the process.

The 100-ft Sunil Chhetri banner was perhaps evidence enough of the undying support extended by the West Block Blues to the Indian National Team, and most importantly sticking with their heroes through thick and thin.

“We wanted to do something special for Sunil (Chhetri) – our captain, leader and legend- when he played in front of the home fans. But it goes out to everyone in the Indian camp from (Sandesh) Jhingan to Robin (Singh) and this is to tell them that we, the 12th man will always be on their corner”, Das opined.

Waseem reminisces the moment when the 100ft banner unfurled, causing a shift in the inertia of the fans – from dormant to euphoric. “The moment we unfurled the banner (Sunil) Chhetri got emotional, you could see it in his eyes. It was equally emotional for us too.”

While the Indian National Team gears up to clash swords against Guam on November 12, 2015 at the Kanteerava Stadium in Bengaluru, the West Block Blues chalk our their course of action for the game.

“For Guam, we have planned bigger things, really big! And it goes out as a message to every fan in the country to come together”, seconds Das.

Sanjna sums up the slated atmosphere for the match against Guam perfectly and adds,“ Let’s just say that that it is going to be spectacular and you’d hate to miss out on not being in the fortress come November 12”.