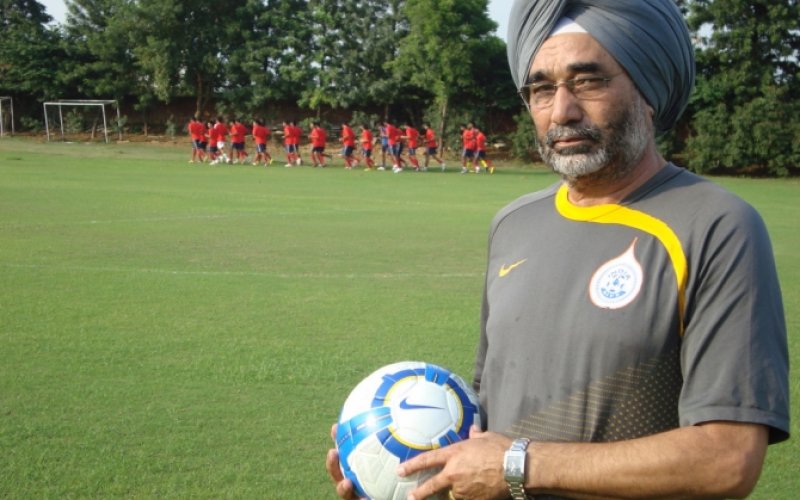 NEW DELHI: Sukhwinder Singh, the 71-year-old coach who was named the winner of the Dhyan Chand Trophy stated the Award is of the Players, by the players and for players. In a freewheeling interview, the veteran Coach took a walk down memory lane to look back at his illustrious career and also compare India’s 2001 WCQ win against UAE, and 2019 draw against Qatar. EXCERPTS:

What are your thoughts on being named the winner of the Dhyan Chand Award?

I'm very proud to have received it. But it could not have been possible without my players. They respect me and I respect them too. The Award is not only mine -- it's more for the players who delivered on the pitch. It is of the players, by the players, for the players.

As a coach, the famous win against UAE is arguably one of your biggest achievements.

It was a golden day for Indian Football. It changed the perception of Indian Football in front of the world. We didn't start with Vijayan that day. In the second half, when I asked him to go for warm-up, the entire stadium sprung into life. Vijayan was a raw talent who could turn a match on its head within no time. He was unmatchable and the UAE defenders could not settle with his pace at all. And when Jules Alberto scored, I still remember how the stadium went berserk. UAE pushed harder, they were attacking in numbers but Deepak Mondal, Mahesh Gawli and other defenders soaked in the pressure till the final whistle.

In the reverse leg, we needed one point to qualify to the next round. We felt unlucky to have conceded a late goal. Even after playing with 10 men for most of the match, we could have held them to a draw. But the late goal dashed our dream. At times, football can be very cruel.

How do you rate that performance compared to the Blue Tigers' goalless draw against the Asian Champions Qatar at Doha in 2019?

Both are equally great results for Indian Football. I follow India's matches very closely and read how the International media acclaimed this result. India played top-class football which was very tough against a quality side like Qatar -- that too at their home. Just like my team did in 2001, the current crop also showed their tenacity, persistence to come out with this result. I appreciate their fighting spirit and organisational skill.

You also won SAFF Championship in 2009 with an U-23 side in Bangladesh. How tough was that?

I would thank President Mr. Praful Patel and the-then coach Mr. Bob Haughton for entrusting us with the young team. Everyone looked at it as a developmental exposure trip but I took the challenge and players supported me like anything. We had the conviction that we could come back from Bangladesh with the trophy.

AFC President Mohammed Bin Hammam, our General Secretary and a lot more VIPs were present at the stands. In the final, we were slated to face Maldives whom we had lost to in the group stage. Arindam saw us through in the tie-breaker. He was eventually adjudged the Player of the Tournament. Tanumoy (Bose) was the goalkeeping coach and he deserved a lot of credits for Arindam's success.

Accolades poured in from every corner and even Bob Haughton was so pleased with that success that he picked up a few boys from our squad to strengthen the senior team.

Coming back to your illustrious coaching career with JCT, how do you remember winning the first edition of NFL in 196-97?

It was another sweet memory but we had to toil hard to earn that. Every team used to respect our star-studded team -- Bhaichung Bhutia, IM Vijayan, Jo Paul Ancheri, Carlton Chapman, Stephen Abarowei, etc were equally capable of tearing apart any opponent on their days. Tejinder Kumar was the leader. But, our performance took a nosedive in the middle and we were almost 10 points shy of the leaders Churchill Brothers.

I had to make a tough decision, so rested Vijayan against East Bengal. As I told, players used to respect my decision always. Vijayan was mature, Bhaichung was comparatively young that time. That decision could have backfired but what a game the boys played that day!

Bhaichung scored a brace and we won 2-0. Next, we beat Mahindra & Mahindra 3-0 in Mumbai and won four matches in a row to get closer to the trophy. Finally, following the nail-biting finish on the final day, we lifted the trophy.

How was the final day drama?

Too much for a football fan! After drawing with Air India, we had to depend on Churchill Brothers' results in the last two legs. They also drew against Dempo in Goa before heading to Bangalore to face Indian Bank on the final day. We had our last match against Dempo in Goa. A win was enough for Churchill whereas we needed them to lose points.

We didn't have access to the internet those days. Even after beating Dempo 4-1 in Goa, we were perplexed. When we got to know that Churchill were held to a 1-1 draw by Indian Bank, we felt speechless. Yes, we could do it. We outranked them by just one point -- a perfect photo-finish to the maiden edition of the National Football League.

You coached Bhaichung Bhutia, IM Vijayan, Sunil Chhetri. How do you rate the trio?

One thing is common amongst them. All three are equally talented to win you a match on their day. As a coach, I'm lucky to have gotten them in my dressing room.