News
‘There was no way we could lose the AFC Challenge Cup final,’ recollects Steven Dias 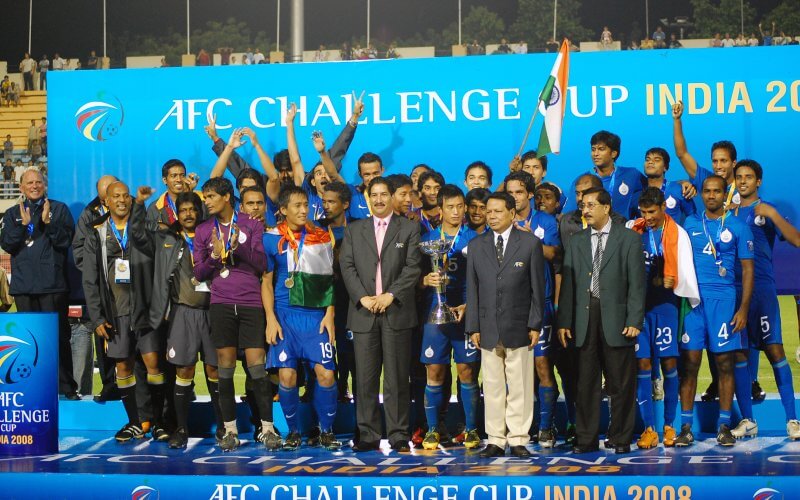 On the 12th anniversary of India winning the AFC Challenge Cup 2008 in New Delhi, midfielder Steven Dias takes a walk down memory lane to pen down his account of that historic night for the official website.

MUMBAI: I have had the honour of playing some memorable matches wearing the Indian jersey. However, if I have to choose my favourite one -- it has to be the final of the AFC Challenge Cup in 2008 -- where we defeated Tajikistan 4-1 in New Delhi – that too on this day, exactly 12 years ago.

The win gave us an entry to the AFC Asian Cup Qatar 2011, ending a wait of 27 years. That night at the Capital was a special one, and I remember it like it was yesterday.

The tournament was held in Hyderabad but the final was shifted to Delhi because of incessant rains. And it rained in Delhi on matchday too. But our spirits were not dampened, and neither could the rain dampen the spirits of the 25000 odd spectators. They braved the rain and cheered for India all throughout.

Playing the final in Delhi was a boost for us. We had won the Nehru Cup a year before at the Stadium defeating a super-strong Syria in the final. The Ambedkar Stadium was like a fortress for us.

Our confidence levels were high going into the final. In each position, we had players who brought immense quality to the team and all of us were confident in each other's abilities. For example, I played a right midfielder and had Surkumar Singh behind me at right-back. I stayed 100% confident that he will cover me if I make an error.

Another important factor in our conviction was the role of our coach Bob Houghton. He simplified the game like no other and the way he would explain things -- it would make it appear so easy. We discussed match situations. He knew very well how to motivate his players and bring the best out of them. His video sessions were simply unforgettable and were extremely powerful.

#OnThisDay 12 years ago, the #BlueTigers 🐯 defeated Tajikistan 🇹🇯 4-1 in the final of the AFC Challenge Cup 2008 🏆 in New Delhi and secured qualification to the @afcasiancup 2011, with @chetri_sunil11 registering his first-ever international hat-trick! 💥 Relive the goals from the memorable night here ⚡🎥 #IndianFootball ⚽ #BackTheBlue 💙 #ThrowbackThursday 🔙

When we arrived at the stadium all of us were completely fired up and focused on the job at hand. There was no way we could lose the match.

The match kicked-off and the start was almost a dream for us. Everything we had planned was paying off. We put Tajikistan under pressure from the first minute itself, and hit the post from a corner in the 9th minute. Off the same attack, I crossed the ball from the right and NP Pradeep headed it towards goal. On the rebound, Sunil was sharp as ever and poked the ball home to give us the lead.

Ten minutes later, we made it two-nil -- Bhaichung bhai scoring with a trademark goal -- converting a low cross from the left flank with a spinning first-time finish. And even before the opposition could react, Sunil scored with a sensational strike in the 23rd minute as he chested a long ball from Subrata Paul, spun to his right and slammed it into the net from long range. The crowd went absolutely crazy. We were 3-0 up with a quarter of the match played!

The standout part for me was that none of the goals we scored was a fluke. All of them were quality finishes that had been worked upon in training. We analyzed the opposition's weaknesses, planned for them and were able to take the chances we created when the situations arose. It is a testament to our coach's game-reading ability, and it allowed us to take control of the match early.

It looked to be our day but credit to Tajikistan, as they did not give up and continued to fight. At the start, even they were stunned but they made their way back into the game and scored once just before half-time.

They created a lot of chances and were growing in confidence but our custodian Subrata rose to the occasion and made a number of brilliant saves to keep our lead intact. His positioning is so good and it made it so difficult for opponents to score past him.

He earned the nickname 'Spiderman' after his incredible showing in the AFC Asian Cup 2011 for a reason. But the final of the AFC Challenge Cup was another memorable performance by him where he showed his class and secured the win for us -- true to his nickname.

As the clock wore down Sunil soothed all the nerves around the stadium with yet another fantastic goal and completed his first-ever International hat-trick. With 15 minutes to play, he charged into the penalty from the left and kept his cool to score, like a true marksman at the top of his game as the match ended 4-1 in our favour.

It was a special result for us and even better was to be able to share our joy with the fans which made the occasion so memorable. The celebrations continued in the dressing room with great aplomb and the scenes were absolutely crazy. Players hugging one another, dunking energy drinks over each other, dancing in pure joy and just enjoying the moment -- it was like a dream come true.

I remember our captain Bhaichung bhai gave a beautiful speech in the dressing room. He was my senior and all of us looked up to him. He shared his feelings and his past experiences with us -- talking about how Indian football is growing step-by-step. It was an emotional moment for everyone and all the players expressed their feelings in the huddle.

We then set our sights on the AFC Asian Cup and were looking forward to taking on the challenge of playing against the big guns of Asia. It was a really significant juncture as we had qualified for the continent's top tournament after a long time. It was an important step forward and we knew that we were ready to go to the next level.

(as told to Shraishth Jain).