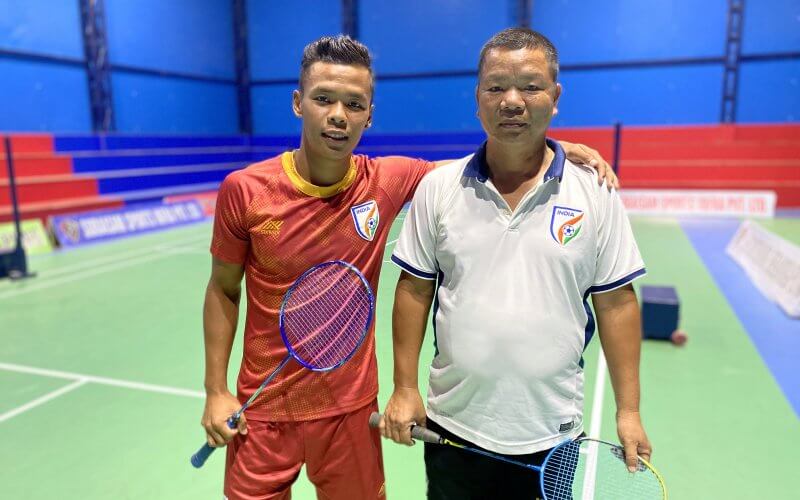 As the World celebrates #FathersDay we visit the Wangjam family in Imphal where the Senior Wangjam, once a district-level badminton player plays badminton with his son Suresh Wangjam on a daily basis to enable his son stay fit during the Covid19 pandemic. Suresh also speaks out about his father wanting him to take up badminton than football, and his dad’s influence on his life.

NEW DELHI: A small crowd gathers in anticipation in front of a roadside badminton court in Imphal, Manipur, as dusk is about to descend. The court itself is based on a concrete floor rather than a wooden or a rubber one, surrounded by cloth-walls, enveloping it in a makeshift shamiana with an asbestos cover overhead. Through the shamiana, one can see an array of bikes parked outside by the side of the seemingly empty road.

A game is going on with the two players going fiercely at one another. The younger duo shows a great deal of athleticism, moving around the court with ease, often jumping high to smash the shuttlecock back over the net. However, the older one uses all their experience to anticipate their opponent’s move and be one step ahead at every turn as smashes keep raining on them. At the end of the long, winding rally, a deft drop-shot by one of the older gentlemen catches the younger duo off guard as the shuttlecock hits the floor.

Former India U-17 FIFA World Cupper Suresh Wangjam lets out a groan in despair, as his father celebrates in an animated manner.

“We have had three singles matches between ourselves so far. I won the first one, but then my father came back to win the next two. He just wouldn’t stop bragging about it to my mom and my sisters when we went back home after the third match,” Suresh said to the-aiff.com with a smile.

The 19-year-old has made it a habit to play badminton with his father and local friends whenever he comes back home during the offseason. “It’s a sport that really gives me a good workout which is very much needed during the off-season. It not only helps me maintain fitness, but also helps keep my reflexes sharp.”

SHUTTLING FROM BADMINTON TO FOOTBALL

While he is the well-known footballer that he is today, Suresh’s father Wangjam Chandra Singh had at first set out to make his son a shuttler.

“My father was a district-level badminton player himself. So I think he wanted me to play badminton,” Suresh informed. “We trained a lot when I was eight or nine, and then he took me to a few tournaments.”

The youngster did not do too well in the tournaments and came back empty-handed. His real interest, though against the wishes of his parents the 19-year-old claims, lied in the ‘beautiful game.’

“Badminton was good, but football attracted me more. I loved playing football but my parents were afraid that I would suffer gruesome injuries playing football. But I didn’t care. I used to run away from the house and play with my friends. Of course, it meant that whenever I came back, I would be severely scolded by my father.

🏸Serve it, smash it, win it, love it💓.!! 🙋‍♂️Dear papa, i asked you to play alongside 👨‍👦with me.!!😅 But No one can be you and that’s your Superpower 😜 #dad #papa #differentgame #footballtobadminton #badminton #game #sport #fit #serve #smash #win #love #play #suresha #manipur #socialdistance #staysafe

“They started to assign a lot of tuition teachers to me in order to keep me away from playing from football, but I still used to find some way. Once I told called up my teacher and told her that we won’t be home, so she needn’t come. And at home, I told the folks that she won’t be coming and went out to play. You can just imagine my father’s reaction after he found out,” he laughed.

However, his parents began to see the merit in letting their son play football once he got selected in B Chandra Memorial Academy in Imphal, and subsequently went on to play for the junior state teams.

Suresh was finally scouted from the Sub Junior National Football Championship and brought into the national team fold in 2014, after which he joined the squad that would eventually go on to play in the FIFA U-17 World Cup in 2017.

“Till then my objective was to get to the National Team and everyone was really happy that I got there. But my father told me that I needed to set new targets once I got selected. He told me to never stop after achieving a certain goal, and that is one piece of advice that has really helped me down the years,” Suresh informed.

WHEN THINGS TOOK A SAD TURN

While Suresh’s career as a football player was on the rise through the U-17 ranks things were not always so easy at home. Wangjam Chandra Singh went through a difficult phase of depression.

“It was a really confusing time for me. On the one hand, I was achieving new things on the football pitch that really made me happy, but on the other hand, I was always worried about things at home,” he said.

“Normally, we would talk every day over the phone, and he would give me advice on different things. That really helps when you are living away from home for a long time,” said Suresh. “I missed these talks during that phase.”

However, senior Wangjam soon came out of that phase and that was soon reflected on Suresh’s results in the 2018-19 season, when he helped the Indian Arrows round off the memorable season with two major upsets against Kolkata giants Mohun Bagan and Kerala Blasters in the Hero I-League.