Referee
Supervisors ‘toil harder’ to ‘get faster despite growing older’ 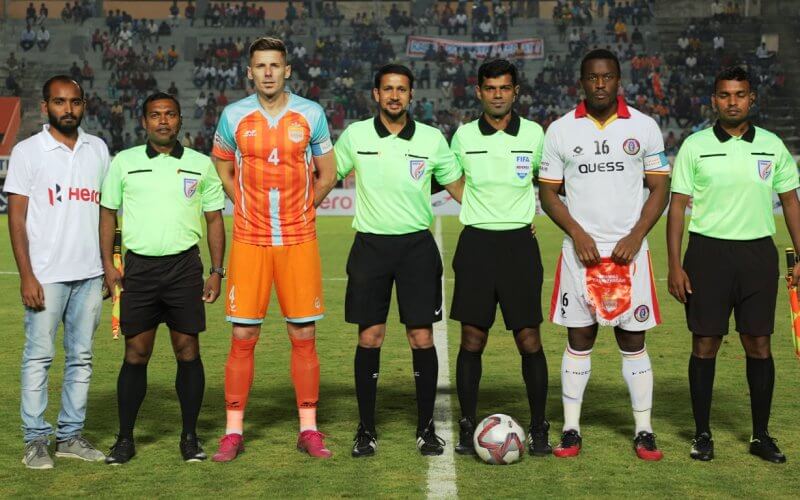 NEW DELHI: At a time when the entire football fraternity has been facing a severe never-seen-before precarious situation due to the ongoing COVID-19 pandemic, it has been “challenging” for the referees to keep themselves up and going during this period.

"It has really been challenging for us to keep ourselves fit during this lockdown. The AFC instructors, and the AIFF Referee's Department have shared the curriculum comprising of strength training, core exercises and energy gaining. Besides the players, the referees also need to maintain their fitness level to run the show smoothly once we come back to normalcy,” Rowan Arumughan, a FIFA panel referee told www.the-aiff.com

Kerala-based Rowan who is the first Indian referee to have officiated an AFC Champions League match after ten years stated they are stressing on indoor training to keep themselves fit during the lockdown tenure.

“It's a two-sessions-in-a-day curriculum and approximately, we are sweating out 2-2:30 hrs every day. As we are not allowed to go for a run we are focusing on breaking extra sweat indoor. Once the season starts, we have to be at the top of our game to perform on the field," Rowan added.

Meanwhile, he is also the senior-most referee from the country having got enlisted in the current FIFA panel in 2009 -- five years before Pranjal Banerjee and Tejas Nagvenkar – the next two Indian referees to get inducted into the panel. Currently, there are eight referees and ten assistant referees from India in FIFA roster.

‘FITNESS IS OF PARAMOUNT IMPORTANCE’

"The fitness tests have become tougher nowadays. It’s of paramount importance as we need to match the pace of the game," AIFF 2018-19 Referee of the Year Venkatesh mentioned.

‘’The pace of the game has increased significantly in the last decade. A normal human being generally becomes slower with age. But we need to maintain the pace. We need to become faster despite growing older," Rowan smiled. ‘’We need to toil harder than others.’’

While Rowan recalled the demanding journey to become a FIFA referee, Venkatesh mentioned the critical challenges they face during the tests. Since becoming a referee in 1999, Rowan had to come up through the ranks of class III, II and I to become a National Referee and eventually, a FIFA referee in 2009.

"Me, as well as Pratap (Pratap Singh, former FIFA referee), began our refereeing careers on the same day. I was 20 then. The path was not smoother or merrier at all. Had we failed a single fitness test in the midway, we would have lost a year."

"In the sprint test, we have to run 40 metres in less than 5.9 seconds. That’s followed by 90 seconds for recovery, and that’s followed by another spell of 40 metres sprint. A total of six rounds of sprints will help you get over the lines," Rowan elaborated.

The trickier part is while one instance of failure is permitted, a couple of failures will dash their chances completely.

The high-intensity test, as it's named, is a notch higher and extremely demanding. This test is hosted on an athletic track of 400 metres. Every 100 metres is divided into two halves. The aspiring referees are asked to run 75 metres in 15 seconds and then walk the next 25 metres in 18 seconds. Likewise, they need to do four rounds to cover one lap of 400 metres.

"The AFC cut-off is 10 laps while you need to cover 2 laps more to become eligible for FIFA and AFC Elite panel. It's easier said than done," Venkatesh smiled.

Even during the off-season, referees can't afford to take a day off, unlike players.

The off-season counts for three months (June-August) which comprises of 12 weeks. Referees generally keep 1-2 weeks aside for rehab and 10 weeks for the heavy workout. In a week, they schedule 5 days of workout and 2 days of rest to get their physique ready for the upcoming season.

"Our local instructors as well as AFC instructors, always keep a close watch on us. We need to fill up a form and share with them regularly. Besides that, they monitor our heart-rate, other parameters and share feedbacks, and that sets the regime for the next few days," Venkatesh informed.

‘WE LEARN FROM EVERYONE’

The perceptions alter, vantage point changes so do the idols. “Earlier, I used to follow Graham Poll, Mike Dean because we used to consume European football more. But when I became an AFC Elite referee, got an opportunity to work with Asia’s creme-de-la-creme, learnt the minute aspects of refereeing from them,” the 40-year-old stated.

While both of them rated Uzbek Ravshan Irmatov as the best in the continent, Rowan feels everyone’s working style is unique in their own way.

Rowan continued: “Ben Williams (Australia), Alireza Faghani (Iran), Turki Al Khudayr (Saudi Arabia), Ryuji Sato and Yuichi Nishimura (Japan) are the referees who have upped the benchmark. Working with everyone has been a different experience altogether. Nawaf Abdulla Ghayyat Shukralla (Bahrain) is another calm but terrific referee who I have learnt a lot from.”

“What I feel, you can’t idolise one referee. There are so many talented ones around us. We try to learn from everyone and implement the learning in our own way,’’ Venkatesh quipped.

Referee A referee cannot afford to be star-struck, says Ro...