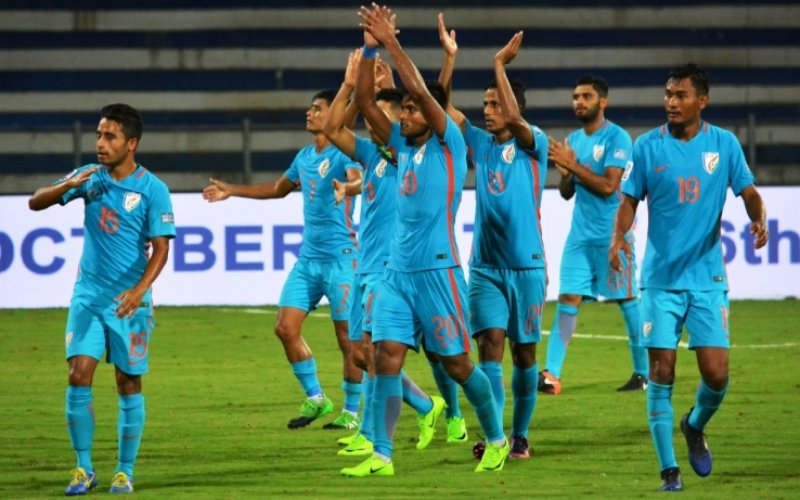 BENGALURU: Sunil 'Champion' Chhetri scored his 54th International goal in 94 matches to snatch all three points from the 'Favourite' Kyrgyz Republic to stay atop the Group A having bagged six points from two matches. Sunil's 69-th minute goal proved enough to take India one step closer to break into the AFC Asian Cup after 8 years.

The game started on an even note as India, clad in a new jersey, kickstarted the game from left to right. The visitors, who are placed at 132 in FIFA rankings, kept up the momentum in the early minutes of the game. They earned two corners in a quick succession within first 10 minutes but the resilient Indian defenders saw the danger off with much ease.

Time and again, the Kyrgyz Republic tried to consolidate their attacks from the flanks but Pritam Kotal, who had a brilliant game throughout, thwarted their moves.

After the clock passed 20-minute mark, Indians slowly came back into the game. Jeje Lalpekhlua and Jackichand Singh, aided by none other than Sunil 'Captain' Chhetri imposed quite a few threatening moves from both the flanks.

In the 23rd minute, Sunil unleashed along-ranger towards Jackichand but his left-footer dropped on the roof of the net.

3 minutes later, India imposed another attack built up by the trio but Sunil's shot was gloved by the opposition goalie.

Just at the stroke of the half-hour mark, the Kyrgyz Republic were awarded an indirect free-kick but Indian defenders snapped it off.

In the additional time, Sunil Chhetri built up another attack from the middle but finally, it fizzled out. The Central Asian outfit imposed a few attacking moves towards the end but Gurpreet Singh Sandhu snatched it to relieve the Indian dugout.

Jeje Lalpekhlua almost caught the defence napping within a few seconds after the resumption but the goalie, who plies his trade with Maziya R&SC, grabbed it.

Jackichand Singh resumed where he left and his agility earned a corner for India after 50-minute mark. Although Eugeneson's corner could have been better, it tested the defenders to some extent.

The visitors had almost drawn the first blood in the 55th minute but the woodwork came to India's help to keep the scoreline unscathed.

4 minutes later, India could have conceded once again but Sandesh Jhingan's maverick defensive acumen kept them at bay.

In the 69th minute, Sunil 'Champion' Chhetri showed it once again why he's rated so high by the opposition. On a counter-attacking move, Sunil dodged three opponent defenders and whizzed past them to put a through ball to Jeje Lalpekhlua. The '2016 AIF Player of the Year' minused it to his captain who eventually put it at the back of the net to send the 6000-strong spectators into a delirium.

Stephen introduced Bikash Jairu at the expense of Jackichand Singh who received a standing ovation from the noisy crowd.

1 minute later, Halicharan Narzary could have doubled the lead from the left flank but his ambitious effort never came down.

With 10 minutes left on the clock, Robin Singh was thrown into the arena having replaced Jeje Lalpekhlua, who got an assist under his name in this match.

In the added time, Sunil Chhetri put in an inch-perfect cross for Robin Singh but he squandered the opportunity completely as his effort just sailed over the crossbar to leave the Indian Dugout aghast.

Seconds later, Sunil also let another opportunity go from the close-range which might have put the final nail in the Kyrgyz Republic's coffin.

The visitors almost found the elusive equaliser in the last minute but Gurpreet showed his sharpness once again to fist it away.

Sunil Chhetri termed this as 'by far the best performance by the Indian Team' in a long time. In the post-match press conference, he stated, "I'm part of the National team for last 12 years and believe me, it's by far the best performance by us in a long time. After getting battered by our coach at the half-time, we bounced back and showed our potential to snatch the win."

He added more, "It was a crucial match for us and we proved ourselves. We are on a good run and hopefully, we'll continue that."

On the other hand, coach Stephen Constantine sounded ecstatic after the win.

"Right from Gurpreeet to Sunil at the upfront- everyone played their part to snatch this result. The midfield, defence showd upto their potential. We knew that this match was not to be an easy one, but at the end of the day, I'm happy with the win and hopefully, we'll take it forward when we travel to Macau."

He maintained, "It's not that we're through already, but yes, this win puts us in a comfortable position."

India will now travel to Macau for their third match in the AFC Asian Cup UAE 2019 Qualifiers on September 5, 2017.