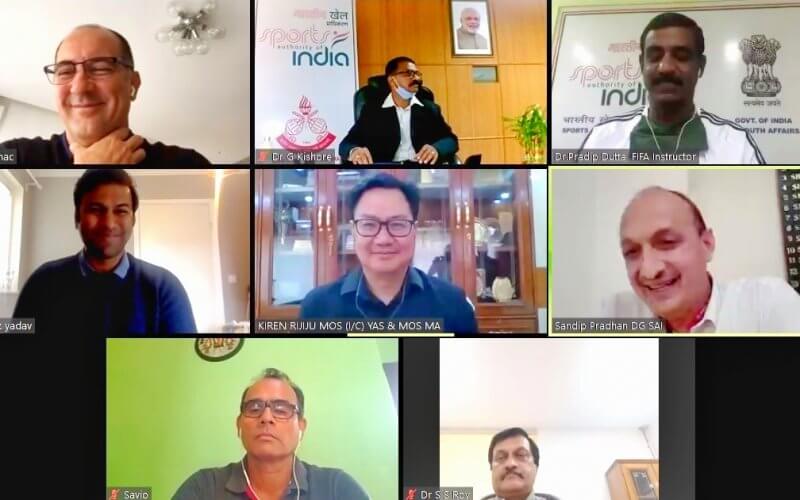 NEW DELHI: Shri Kiren Rijiju, Minister of State (Independent Charge) of the Ministry of Youth Affairs and Sports on Friday afternoon (May 1, 2020), joined all the participants of the ongoing All India Football Federation-Sports Authority of India joint collaboration online Coaching Refresher Course.

The online course is being conducted jointly by AIFF and SAI in the wake of the Covid19 pandemic, which has forced the entire country to be under lockdown since March 25. A total of around 1,000 participants have been attending double sessions from several experts, and distinguished speakers since April 20 onwards. The course concludes on May 3.

The participants were also for a pleasant surprise for the afternoon session titled ‘How to manage Star Players’, as they were joined by Mr. Zlatko Dalic, Head Coach of the Croatia National Team, which finished runners-up in the FIFA World Cup Russia 2018. Indian National Team Head Coach Mr. Igor Stimac was also present, as was Mr. Sandip Pradhan, Director General SAI, Mr. Savio Medeira, Head of Coach Education in India, and Mr. Abhishek Yadav, Director of National Teams.

The Minister condoled the death of Padma Shri and former National Team Captain of India the late Chuni Goswami, who passed away in Kolkata yesterday (April 30). “I want to pay my tribute to the Golden Man,” he said.

Expressing his delight in being able to join the online course, Shri Rijiju stated that the “initiative has been extremely beneficial to all the coaches all over the country”.

“We have been able to reach out to all through video conferencing, all in an effort to create a better football culture. We felt best to take advantage of the situation and launch the largest-ever coaching development programme,” he maintained. “Enhancement of the capacities of the coaches is our prime target.

“Football is a passion for me and also a way of life – especially keeping in mind the region from where I grew up. I feel the leagues need to be developed locally, and as the first step, we need to take football to the schools,” Shri Rijiju expressed.

“When we talk about creating a sports culture in India, we can never overlook football. We have to devote a lot of time to the sport. Football is not just a game – it is much more,” he pronounced. “A robust setup at the state level, in all the states is required for the development of the sport. I welcome the corporate world to get involved at the Grassroots level, and then look at scouting aspects thereafter.” He also acknowledged the support of the AIFF and National Teams players for contributing to the PM CARES Fund and also rising to the occasion to help the society in their own personal capacities.