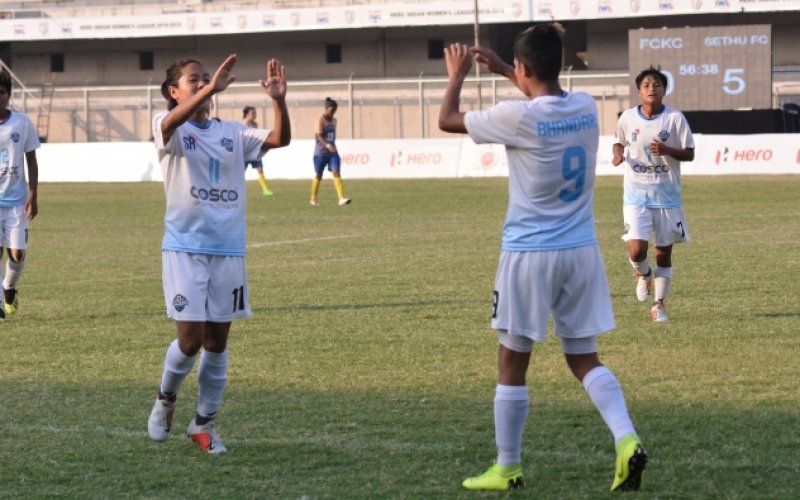 LUDHIANA: Sethu FC took up a commanding position at the top of the Group II table after a massive 9-0 victory over FC Kolhapur City at the Guru Nanak Stadium in Ludhiana on Sunday.

Sethu’s Nepal and India internationals Sabitra Bhandari and Ratanbala Devi, respectively, both scored a hat-trick each; the latter was awarded the Player of the Match.

Sethu were dominant from the very start, and laid a siege on the Kolhapur goal. It took them all of four minutes to break the deadlock, as Dangmei Grace finished off a quick move.

A little over a quarter of an hour later, the India international netted again, this time, from the penalty spot.  Just four minutes later, Dangmei’s India and Sethu teammate Ratanbala scored two in quick succession to make the scoreline 4-0 in Sethu’s favour, even before the half-hour mark.

Kolhapur defender Jabamani Tudu added an own goal from a cross by Ratanbala on the stroke of half time to make it an already humiliating scoreline.

Sethu’s Nepal international got in on the act in the second half, and scored a hat-trick in 20 minutes, starting with a 57th minute goal that ended with a Cristiano Ronaldo-like celebration. The second goal by Sabitra was a slick team move thata was started off by Sandhiya, before Ratanbala put Sabitra through to score.

Meanwhile, Sabitra linked up well with Sandhiya, who squared the ball back to her inside the box for the Nepal international to score.

Ratanbala Devi completed her hat-trick as well, with a little over 10 minutes of regulation time to go, as she finished off a pass from Sandhiya to make it a massive 9-0 scoreline for Sethu FC.