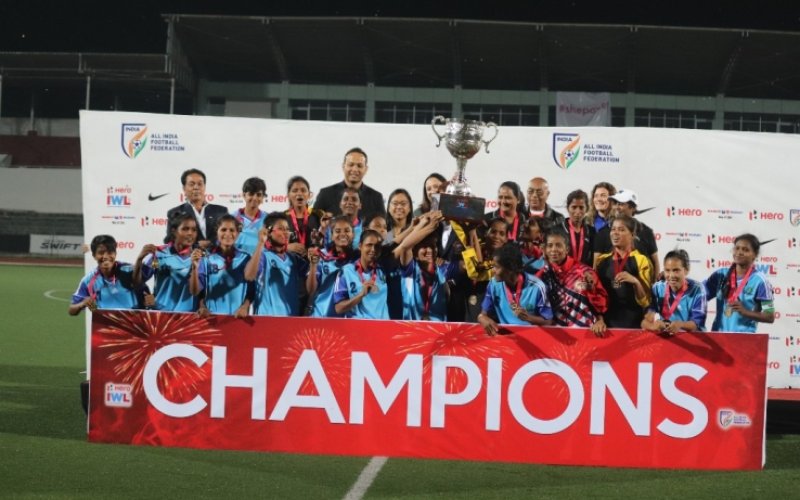 SHILLONG: Rising Student Club were crowned champions of the second edition of the Hero Indian Women’s League after the Sukla Dutta coached side defeated Eastern Sporting Union 5-4 on penalties after the full-time scoreline read 1-1 at the Jawaharlal Nehru Stadium in Shillong, Meghalaya today (April 14, 2018).

Rising Student Club started the match on an attacking note and in the 3rd minute a scramble from inside the box led Ngoubi Devi to shoot wide of goal. Undeterred by the early pressure, ESU staged attacks of their own and in the 13th minute Roja Devi found the back of the net from outside the box as her shot left the opposition goalkeeper wrong footed.

In the 19th minute, Mandakini Devi’s attempt from a tight angle inside the box hit the side-netting as ESU pressed to double their lead. Supriya Routray had a chance to equalize proceedings for Rising Student Club in the 40th minute after a corner kick found her free of any marking player, but her shot went wide of the goal.

The half-time scoreline read 1-0 in favour of Eastern Sporting Union.

In the 51st minute, Roja Devi connected on a cross from the flank but her shot from inside the box went way wide of the goal, as ESU showed their intent.

The defensive line of ESU mopped up any Rising Student Club attacks that cropped up with ease, while the midfield held onto possession of the ball.

Much against the run of play in the Rising Student Club were awarded a penalty in the 71st minute after a foul inside the box and Sanju slotted the ball home from the spot to level proceedings as the scoreline read 1-1. The full-time scoreline read the same as the match proceeded into extra time.

In the 94th minute, the Rising Student defence line blocked Roja Devi’s shot from inside the box and two minutes later, Mandakini Devi’s freekick was saved by the opposing custodian. In the 105th minute, Roja Devi’s shot went inches wide the goal as she attempted to shoot from outside of the box.

ESU pressed for the decisive goal but failed to find the net and after 120 minutes of play the scoreline still read 1-1 as the match proceeded to penalties where Rising Student Club eventually won 5-4.

The ‘Most Valuable Player’ was awarded to Prameshwori Devi with INR 1.25lakh and Dangmei Grace won INR 75,000 for bagging the ‘Emerging Player Award’.