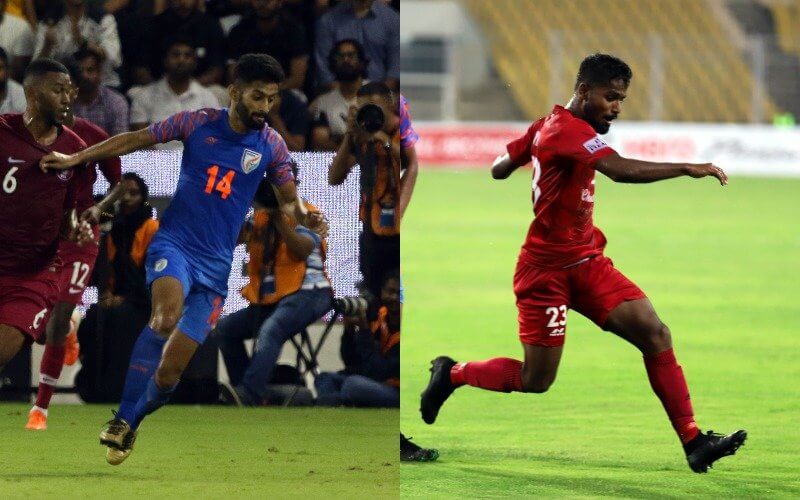 NEW DELHI: From Neville and Derek D'Souza to Pradip and Prasun Banerjee, the Indian National team has seen multiple sibling pairs don the colours over the years. Aspiring to add to the list are Nikhil and Vinil Poojary -- who share the goal of playing for the Blue Tigers together and fulfil their parents' 'lifelong dream.'

"Our parents never stopped us from pursuing our passion in football and always encouraged us right from the start to give our best and make a career in the sport. It has always been their dream to see us together in the blue jersey of the Indian team and we hope to make it come true in the future," quipped the 24-year-old Nikhil, who is the elder of the two brothers and made his senior India debut in 2017 against Mauritius.

Vinil, who is two years younger and has featured for Goan side Churchill Brothers FC in the Hero I-League in the last two seasons, spoke about his National Team ambitions and what it means to him and his family together.

"We were always encouraged to take part in activities and sports, and there were times when I even scored less in academics in school but our parents never stopped us from playing. They have always backed me and Nikhil, and stood by us -- silently making sacrifices for our sake. We hope that one day we can fulfil their dream of seeing both of us in India colours together,” he said. “But it’s a tough road ahead, and I don’t mind taking it in my stride."

The ongoing lockdown as a result of the ongoing Covid-19 pandemic has made it difficult to train and remain in shape for sportspersons across the country. However, the duo prefers to look at the brighter side and stated that it has enabled them to spend quality time together after years.

"It is for the first time in so many years that the four of us are together as a family again. It's a good break for all of us. We could never celebrate any festivals together because of club commitments or National Team duties. Now, we spend quality time together -- talk about football and other stuff, and divide the household chores amongst us," smiled Nikhil, who was part of the Indian line-up that registered a historic 0-0 draw against reigning Asian Champions Qatar in Doha last year.

With both brothers being professional footballers, Nikhil detailed how it has helped them train and remain motivated during this challenging lockdown period.

"When it comes to training at home it's obviously better to have to two people instead of one. We can do different drills with the ball and importantly, we can push each other. If one day, I am not feeling like working out -- Vinil will push me and I will do the same as well. Having each other around certainly helps in remaining focused,” Nikhil informed.

Another interesting aspect of the pair's relationship is their process of “honest feedback” and match preparation, with both being wingers and playing in the same position on the pitch as well.

"Nikhil bhai is the first person I speak to after every match. We watch all of our matches and talk about how the other played. Not everyone can be open in their feedback and being brothers, we can give each other real feedback. If I have had a bad game, Nikhil bhai will tell me directly. Bhai hi bol sakta hai aise (Only my brother can talk like that)," Vinil mentioned.

The elder Poojary added: "It's good to have a footballer brother. We prepare for each game differently and study each other's opponents. Since both are wingers we will study and talk about the opposition wing-back that me or him will face the next day -- point out weaknesses and see how we can take advantage of situations."

At the start of the 2019-20 season, the two faced off against each other for the first time at senior level in a pre-season friendly between their clubs -- Hyderabad FC and Churchill Brothers. However, their fondest memory of playing on the same pitch was in their college days -- where they joined forces to help their side Pillai's College win the Mumbai University inter-college championship in 2015.

"We never got any chance to play together at junior level since we were in different age groups. However, when we played together for the first time -- we won the final after finishing runners-up in the last two years. It was a really proud moment for the both of us as it was also the first time our college became Mumbai champions," recalled Nikhil.