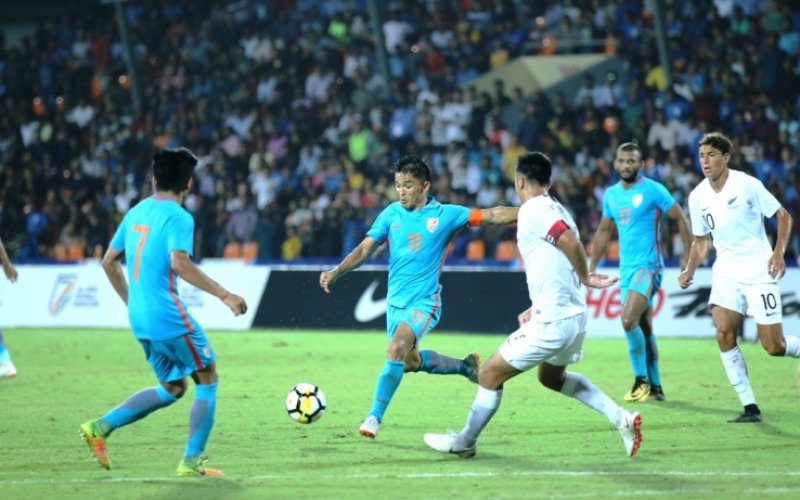 MUMBAI: The left-foot of a 19-year old player of Indian origin Sarpreet Singh spurred New Zealand to a deserving 2-1 victory over India in the Hero Intercontinental Cup at the Mumbai Football Arena on Thursday (June 7, 2018). Singh didn’t score but set up the two goals besides tormenting the Indians all throughout, right from the first minute itself.

A lucky goal from Sunil Chhetri has put India into the lead in the 48th minute but the Kiwis first restored parity through Andre Jong while substitute John Dyer sealed the fate in the 86th minute. Both Teams finished their league engagements on 6 points each.

The first-half saw New Zealand dominating all throughout and coming close but the Indians soaked in all the pressure, didn’t open up and managed to hold on. The trend continued even in the second and though the Indians fought back, New Zealand stayed the better team.

India made seven changes to the starting line-up from their last match against Kenya and that cost them dear. Three crosses in the first two minutes by Singh threatened to open up the Indian defence. But even as all of them dipped alarmingly, the defence didn’t allow the Kiwis to pull the trigger.

Perhaps, that was the indication of the things to come – the New Zealand gameplan.

The first card of the game came out in the 8th minute when Jai Ingham was booked for an off-the ball infringement on Ashique Kuruniyan.

It was evident the Kiwis had come with a strategy of ruffling the Indian defence with quick crosses and their first shy at the Indian goal came in the 12th minute but Andre Jong’s header sailed over. The Indian midfield looked awry and it allowed New Zealand to take it over.

With Md. Rafique playing in an unusual position on the right flank, the right side wasn’t quite functional in comparison to the previous two matches. Frustrated a bit, Narayan Das picked up a yellow card in the 15th minute.

The cheers went a bit louder in the 22nd minute when rival Goalkeeper Michael Woud fumbled a routine gathering allowing captain Sunil Chhetri to get it on the rebound. But an alert Woud managed to narrow it down and avert any danger.

Sarpreet was again at his menacing best in the 26th minute dipping another one which Ashique managed to head out. The next minute, rival captain Cameron Neru’s shot narrowly missed the mark.

The first change for India came in the 27th minute – Udanta Singh running onto the field to replace Rafique on the right flank. The Kiwis, meanwhile, continued to dominate dipping in those vicious crosses regularly -- Sarpreet narrowly being denied in the 34th minute.

Had not Amrinder denied Nikko Boxall’s sharp header off the resultant corner, the Kiwis would have surged into the lead. Off the next build-up, Andre Jong, all in the clear, missed a free header -- Sarpreet being the provider again. The Indians were clearly having problems dealing the nimble footed Sarpreet.

Frustration continued to creep in and in the 41st minute, Subhasish Bose picked up a yellow card for a bringing down Myer Bevan.

India didn’t come up with a promising counter-attack led by Chhetri. But after the one-two between Chetri and Udanta had initiated promise, Ashique couldn’t get past his marker in the box allowing the rival defence to recover fast.

In the 44th minute, Chhetri’s anticipation from no-where almost put India in the but even as he followed Balwant’s pass, his prompt volley just sailed over. That was India’s sole chance in the first-half as both sides headed to the interval locked goalless.

Changing over, India came up with three changes -- Jeje Lelpekhlua was introduced – his 50th International match for India as he came in for Balwant; while Halicharan Narzary and Pronay Halder replaced Borges and Kuruniyan respectively.

India plucked up a goal from nowhere when in the 48th minute to surge into the lead when Chhetri followed by a back-pass to Woud and the latter’s clearance hit Chhetri’s outstretched leg and rolled into the net.

The joy, however, was short-lived. Sarpreet came up with a delectable pass to set Andre Jong in the clear who gleefully slotted it past Amrinder to restore parity off the next attack in the 49th minute.

In the 55th minute Bevan’s feint disbalanced Salam and Kotal had to plunge into a desperate tackle to deny him taking a shot but even as the referee pointed for a free-kick just at the edge of the box, the Indian wall stood in between.

Sarpreet, meanwhile was continuously creating ripples in the wings and every time he had the ball, there was a threat loomed.

In the 68th minute Chhetri tried to find someone in the box off a free-kick but the crowd of legs didn’t allow Halder to have a crack.

Halder’s inclusion did add the cushion in the midfield as his defensive qualities provided an insulation to the makeshift central defence, a quality which wasn’t present in the first-half. In the process it allowed Chhetri more share of the ball trying to open up the rival defence working in tandem with Udanta, Jeje and Halicharan. But the Kiwi defence was too tight to be torn apart.

The Kiwis who were constantly pressing were eventually rewarded in the 86th minute -- this time too Sarpreet laying John Dyer on a platter to tap it past Amrinder.