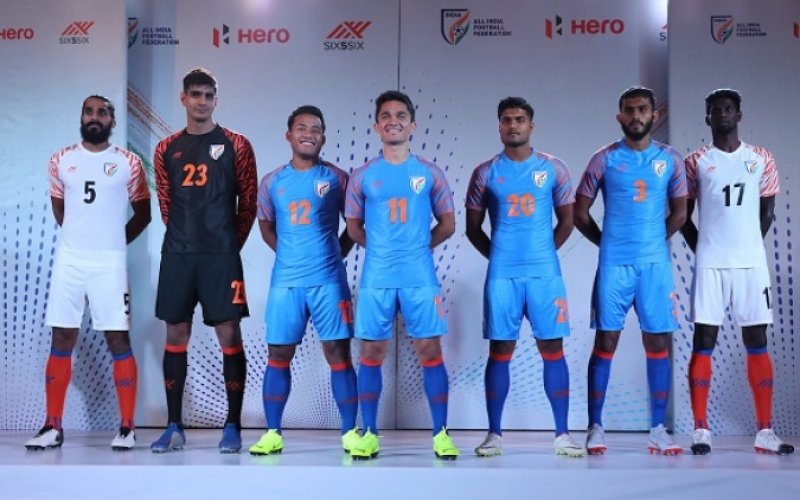 NEW DELHI: The new year will have a new look for Indian Football. The Blue Tigers will be wearing new kits, manufactured by the Indian Sportswear brand, Six5Six, starting with their campaign in the AFC Asian Cup UAE 2019 in January 2019.

The kit sponsors, Six5Six have signed a 5-year deal with Football Sports Development Limited (FSDL), the commercial partners of All India Football Federation (AIFF), and will be outfitting the Indian National Teams across all age groups and genders, as per the agreement.

The new jersey pays a homage to the Indian Football Fans, who have affectionately been calling the Team “Blue Tigers.” The new kit has stylized tiger stripes design element emblazoned on the sleeves reverberating the Blue Tigers’ predatory instincts which has seen them rise from 173 to 97 in the FIFA rankings in the last 3 years.

The contract with the present kit sponsors Nike expired in 2018.

AIFF President Mr. Praful Patel in his statement said: “I welcome Six5Six on board as the official kit sponsors of the Blue Tigers. The new kits look awesome and I cannot wait to watch the Blue Tigers in their new skin for our biggest continental event – AFC Asian Cup 2019, and the International Friendly leading to the event. We look forward to a fruitful and long term relationship with Six5Six.”

Mr. Kushal Das in his statement said: “We are glad to have Six5Six as our official kit partners for the Blue Tigers. Its indeed a momentous occasion as the team heads on to participate in biggest continental tournament of Asia -- AFC Asian Cup 2019. We will ensure that the official merchandise will be available for all fans.”

The co-founders for Six5Six Avni & Ambar Aneja in their statement said, “SIX5SIX is proud to announce their partnership with the National Team as the Official Kit Partner. The whole process of design was inspired by the spirit of the team and its rise in world football.”

“Young, roaring and ready-to-go, the design is a reflection of the current state of Indian Football.  The alliance is a big leap forward for the brand and the national team, and we can’t wait to see what the bright future of Indian Football holds!”

The replica kits will be available for the Indian Football Fans starting from December 20, and are priced keeping in mind the average Indian consumer. Six5Six will make other merchandise available in the near future.

Iconic National Team striker Sunil Chhetri, highest Indian goal scorer in International Football highlighted the comfort element of the new kit. “There is a sense of freshness in the jersey and it’s always nice to have a kit we are comfortable in,” he said.

The Indian team will be seen donning its new colours for the first time in their friendly match against Oman, which will be played in Abu Dhabi on December 27, 2018.

India kick-off their campaign in the AFC Asian Cup against Thailand on January 6, 2019 with matches against hosts UAE and Bahrain slotted for January 10, and 14 respectively.

SIX5SIX Sport was born in 2018 with the intent to ensure that customised team kitting would become accessible and affordable at all levels of all sports across the country. In the short span of time that it has been operational, SIX5SIX has collaborated and worked with some of the biggest sporting properties in the country including Ultimate Table Tennis (UTT) and Hero Indian Super League (ISL).

The core value and strength of SIX5SIX is passion for the development of sports at the grassroots level and speed to market, respectively, which can be attributed as one of the primary reasons for its ever-growing portfolio.