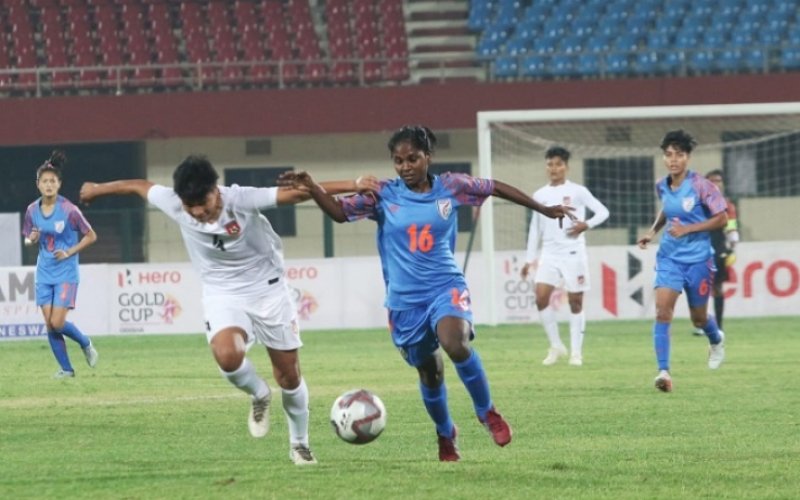 BHUBANESWAR: India suffered their second defeat of the tournament as Myanmar ran away with a two-goal victory at the Kalinga Stadium in the last round-robin match of the Hero Gold Cup, on Wednesday.

July Kyaw scored just a couple of minutes after the game began, while Win Thengi Tun netted one in the dying stages of the game, to help Myanmar top the group stage.

The away side got off to a quick start and broke the deadlock in the second minute itself when Yee Yee Oo was played through inside the Indian area from the left. She sent in a low cross, but India captain and goalkeeper Aditi Chauhan could not collect it properly, and July Kyaw was at the right place on the right time, to tap it home.

The Indian eves immediately went in search for the equaliser. Ratanbala and Sangita Basfore dictated play from the middle of the park, while Sanju tried to initiate the attacks, playing behind forward Manisha.

Sanju even managed to put Zarzar Myint under some considerable pressure, as she cut inside and unleashed a vicious shot from around 25-yards out, but the Myanmar keeper tipped it over the bar. Right-back Dalima Chhibber did well to get on the end of the resulting corner, but her header went inches wide.

India Head Coach Maymol Rocky brought Anju Tamang on for Sumithra. This substitution worked wonders for India in terms of creation of chances, as they dictated play for long portions of the second half. Anju combined well with Manisha up front, to help the midfielders create more chances.

They had a brilliant opportunity on the hour-mark when a corner was fumbled by Zarzar, before Dalima had the opportunity to nod in the rebound. However, her shot was blocked and the Myanmar defence eventually managed to scramble it away.

The away side, on the other hand, relied on the counter attacks, and they almost doubled their lead when Win Thengi Tun latched on to a loose ball, laid it off for her captain Khin Marlar Tun. However, the latter’s shot went inches wide.

India had another golden chance in the last 10 minutes when Dalima’s cross was fumbled by Myanmar keeper Zarar, before Sanju managed to get in between two defenders and plonk it into the goal. However, the referee had already blown his whistle for a foul in Myanmar’s favour, much to the disappointment of the home crowd.

Myanmar did manage to secure the win with a second goal in the dying seconds of the game when Win Thengi again broke into the Indian area and was brought down by Sweety Devi as the referee pointed to the spot. The former made no mistake, as she slotted the penalty past Aditi Chauhan, to secure the three points for Myanmar.

With this result, both Myanmar and Nepal have secured progression to the final of the Hero Gold Cup 2019, while India finish the round robin stage on third.