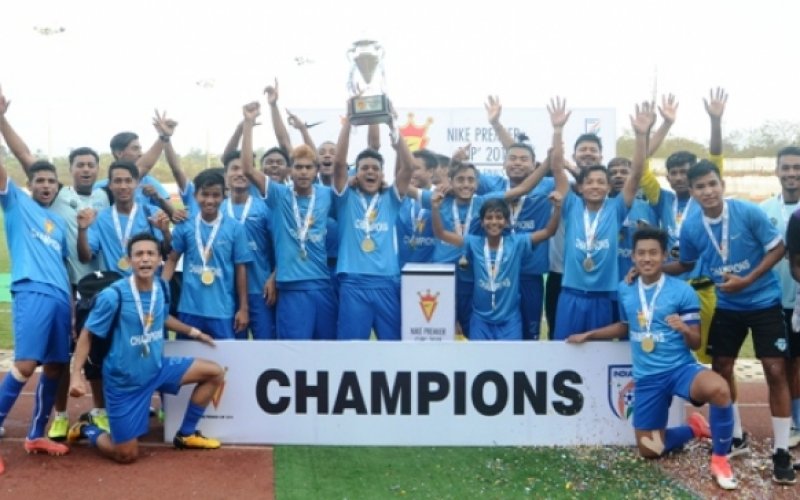 The final of the 2018 edition at the Bambolim Athletic Stadium in Goa was a one-sided affair that was sealed by goals from Lalchhanhima Sailo (14th), two from captain Moirangthem Thoiba Singh (62ndand 68th) and a Hemam Bijio Singh (80th) strike.

Minerva Punjab were in total control of the game as they outfought and outplayed DSK Shivajians who were making their first appearance in the final.

Minerva Punjab fielded the same set of boys who had beaten Aizawl FC in the semi-final. As for DSK Shivajians, Tanmay Sunil Kumar was given a start as he replaced Karan Savio Balami.Bijio Singh and Samson had chances early on for Minerva as Shivajians goalkeeper Rewang Dorjee Lepcha was kept busy.

It was a matter of when Minerva would score and they made it 1-0 in the 14th minute. Their midfielder Lalchhanhima Sailo cut in from the right and took his time before unleashing the sweetest of strikes. It was a pure class by Sailo as he placed his left-foot shot into the corner of the net – leaving Lepcha rooted to his spot.

Shivajians coach Ramesh Bista could only look on as his team were thoroughly outplayed by Harpreet Bedi’s young guns. Minerva could have scored a couple more while DSK Shivajians did not have a single shot on target at half-time.

The score at half-time was 1-0 in favour of Minerva Punjab.

DSK Shivajians started the second half on a better note compared to the first.

Being still in the game, Minerva were made to defend by the Shivajians. But Minerva showed their quality by scoring at the hour mark. Substitute Isra Khan provided the assist as he found plenty of space down the right flank.

Khan swung a delicious cross into the box and Thoiba Singh rose above his marker and planted the ball into the net. And they were up 2-0 in the 62nd minute.

DSK had a few chances and the best of them was a header by Zamlunmang whose glancing header was not far off. John Lalfamkima also tried a header that was blocked by Minerva custodian Jaskarenvir Singh.

But it was Minerva who scored again as they went 3-0 up in the 68th minute.

Sailo was brought down in the box and Thoiba Singh stepped up and scored from the spot to make it 3-0 with the title all but secured.

But there was time for a fourth as Bijio Singh tapped home from three yards out as they were 4-0 up in the 80th minute.

Minerva laid siege to the DSK Shivajians goal but the final score was 4-0 until the final whistle to walk away with the silverware and a hefty cheque of INR 5 Lakhs.