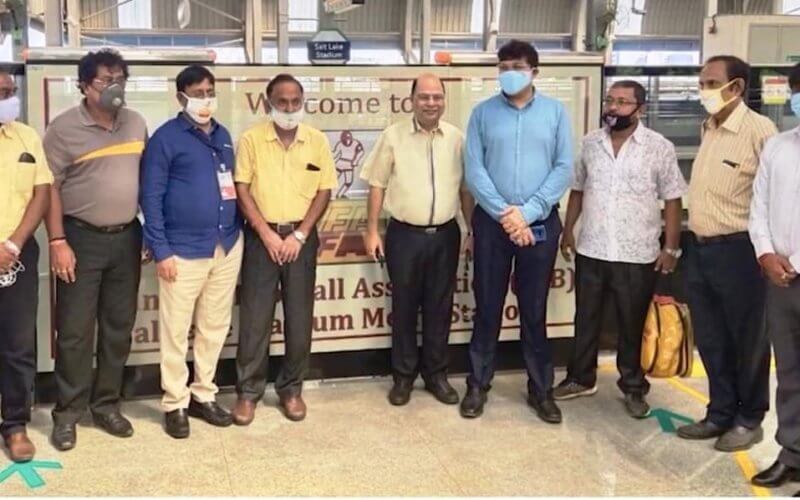 KOLKATA: In what is a historic first in the spectrum of Indian sports, the metro station adjacent to the Yuva Bharati Krirangan, Kolkata has been named as the ‘Indian Football Association (IFA) Salt Lake Stadium, making it the first-ever in the history of any affiliated sports association in the country.

Mr. Joydeep Mukherjee, Secretary, IFA thanked the Kolkata Metro Rail Corporation (KMRC) for the gesture, besides mentioning about the naming being a “huge honour” for football in Kolkata, and Indian Football overall.

“Football in Bengal is perhaps the biggest sentiment which binds everyone together in the state. We see this as a big honour for all stakeholders involved with the game. This is our city, this is our sport,” Mr. Mukherjee stated.

“I thank KMRC and the Government of West Bengal for their support. This is tribute to the legends and all who have taken Indian Football to higher echelons. The naming of the station will lead to tremendous excitement among football aficionados. It is a very proud day for football in the country,” he stated.

Mr. Subrata Dutta, Senior Vice-President, All India Football Federation averred “convergence of public transport and football” has been there for long in Bengal.

“Over the decades, fans mostly have used public transport in Kolkata to travel to the stadiums. The naming of the station to IFA Salt Lake Stadium will present a further sense of oneness to all the fans who have been the real stars of football. I see this as a unique initiative which will further help in connecting the fans at a faster pace to the rapidly changing football landscape in Bengal.”

“I take this as an honour and as a resident of Kolkata feel extremely proud. My sincere thanks to KMRC and the Government of West Bengal for connecting the lifeline of Kolkata with Football in Kolkata.”

The naming of the station comes close on the heels of the State Association signing a four-year deal with Accord Sports VDK as its commercial partner, and IFA winning the ‘2019-20 AIFF Award for Best Grassroots Programme.’

“We at IFA are totally committed to bringing back our glory days. I urge full cooperation from all stakeholders in our endeavour to take Indian Football Forward Together,” Mr. Mukherjee expressed.

The IFA is also acting as the LOC for the Hero I-League Qualifiers 2020 – the first-ever sporting event in the country since the covid19 lockdown. The Qualifiers are being played under the secured bio bubble as per medical parameters laid down by the authorities.