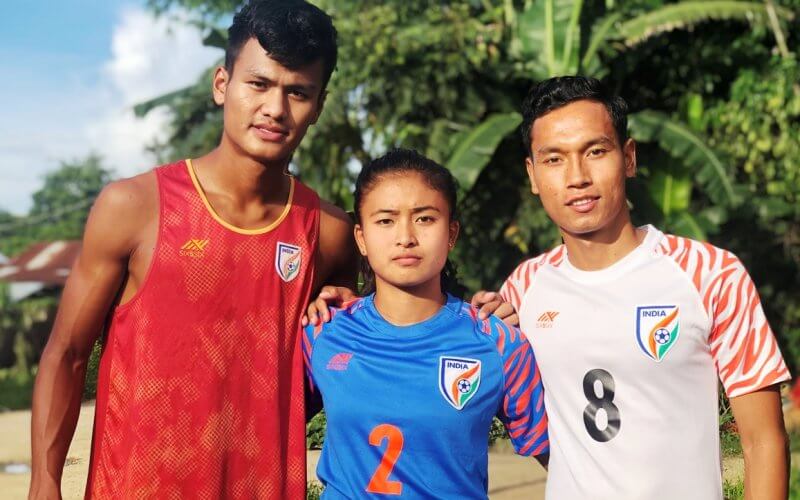 NEW DELHI: Time stood still as Jeakson Singh Thounaojam leapt higher than all in the sultry Delhi air to head the ball into the back of the Colombian net -- becoming India's first-ever goal-scorer at a FIFA World Cup in 2017.

As he ran to celebrate much to the joy of the delirious home fans, joining the celebrations was the man with the armband -- Amarjit Singh Kiyam -- Jeakson's fellow midfield general as well as cousin -- with the two having made the journey from Thoubal to the FIFA U-17 World Cup India 2017 together.

The unforgettable goal has inspired a new generation of players across the length and breadth of the country to dream big and soar high.

Among those is another member of the Manipuri duo's family itself -- Kritina Devi Thounaojam – some two years younger to her elder cousins, and currently a probable of the Indian U-17 Women’s team for the upcoming FIFA U-17 Women's World Cup.

"I remember watching Jeakson's goal in the World Cup live on television. It was a unique feeling. It was such a powerful moment for the country, and also our family," 17-year-old Kritina told www.the-aiff.com.

This Rakshabandhan, we bring you the story of the 2⃣ brothers and 1⃣ sister, who may soon have a special U-17 @FIFAWorldCup connection 🤩@KiyamAmarjit#HappyRakshabandhan 👫 to everyone 🙌#BackTheBlue 💙 #IndianFootball ⚽ pic.twitter.com/nPFMBM4ps8

"I was inspired to play football seeing my brothers. Amarjit and Jeakson taught me so much. We trained together whenever they would come back to our village. Practising with them always made me very happy. It was amazing when I saw them playing in the World Cup. That motivates me to play in the World Cup as well. It will be a proud moment if we have three World Cuppers from the family.”

Amarjit, who made his Senior Team last year at the age of 18, took a walk down memory lane and mentioned how all of them took their first lessons from the same coach, where Kritina would sometimes be the only girl.

"All of us used to train together under Jeakson's father (Deben Singh) -- he was our first coach. There were other players as well with us. The first girl to have joined was Kritina. There were times when she was the only girl amongst us and would also play for our local team,” Amarjit mentions.

"She is a very good player -- technically good and mentally very strong. Seeing her, a few more girls also joined from nearby, including Babina (Devi Lisham, another U-17 women's team player)," Amarjit, who has five senior international caps to his name, informed.

Jeakson, who made 13 appearances for Kerala Blasters in the Hero ISL last season shared an interesting anecdote -- recalling how Kritina's speed made her stand out from the rest, and even outpace boys older than her.

"I distinctly remember that she would run very fast as a kid. My father convinced her family to put her into football. He would coach her and whenever we would come home, we would also teach her new drills and exercises that we also learnt,” Jeakson quipped.

"Once when we had come home, we organized a small tournament where Kritina played and was up against boys her age, and some even older to her. She was brilliant and played very well. She was faster than some of the boys -- that was a really special memory,” stated Jeakson.

Kritina was 13 years old when she took up the game and in 2016-17 -- she was selected to represent Manipur at the National Championships. She broke through into the National Team ranks quickly -- representing the country at age-group level SAFF competition.

In 2018, she was a member of the Indian outfit at the AFC U-16 Women's Championship 2019 qualifiers in Mongolia. Most recently, the speedy winger was part of the U-17 National team that took on Sweden and Thailand in the U-17 Women's Football Tournament last year. In fact, she scored the only goal in India’s solitary goal victory against Thailand.

The trio, with their houses at walking distance from each other, has been training together while in lockdown and the eldest of them -- Amarjit, spoke about how “proud” it makes him to see his cousin don the India colours.

"We (Jeakson and myself) know the feeling of playing for our country. Seeing Kritina do the same makes us so proud. She has already played at U-16 level and has even scored. I am very happy to see the effort and hard work put in by her every day -- and how motivated she is. She is an example to follow for so many girls and I hope she keeps growing and moving forward," he quipped.

"Senior or age group -- the World Cup is the most important tournament in football. You are representing your country in front of the whole world. It's an incredible experience that is different from anything else,’ Jeakson opined.

“We have all seen the impact that the first World Cup had on Indian football and I am sure the upcoming one will provide a massive boost, especially for the women's game,” Jeakson opined.

Should Kritina be selected for the final squad next year, it would be a truly unbelievable feat. It would be a proud moment for the whole family, especially my father. Three World Cuppers in the same family -- it would be one incredible family tradition to have," Jeakson expressed.