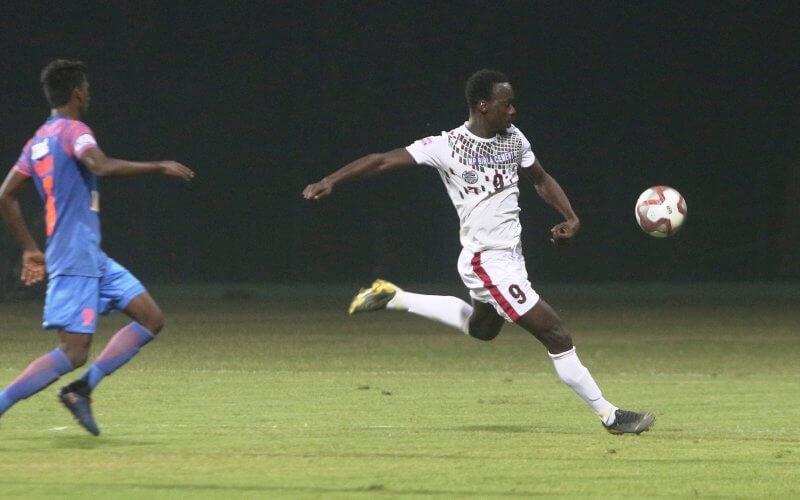 NEW DELHI: The pedigree of Mohun Bagan striker Baba Diawara is unmistakable. Having played in the La Liga, he has goals against Real Madrid, Atletico Madrid, Espanyol to his name. Prior to the Kolkata derby, the Senegalese striker opened up to the official website about his targets, him scoring goals, the Kolkata Derby, his impression of Mohun Bagan, and much more. We also discovered a softer side of the tough man. EXCERPTS:

You have played for Sevilla in the La Liga. Take us through those moments.

I started my career in Senegal, and then moved on to play for Maritimo in Portugal. And as La Liga came calling I answered Sevilla’s call, packed my bags and shifted. But life wasn’t easy. There were big names around, quality players who rule the world of football, eg, when I came to Sevilla, there was Frederic Kanoute around.

From Sevilla, I moved to Levante on loan in search for more game time, and then again moved on loan to Getafe. I ended up playing some 70+ matches in the La Liga.

Do you remember your first La Liga goal?

It came against Atletico Madrid (smiles). Over the years, I have scored quite a few goals including ones against Real Madrid, Espanyol, Real Valladolid.

What brings you to India?

Even at the start of this season (2019-20), I had rejected quite a few offers. It was around this time that a local friend and an agent kept telling me about India. They pursued it day in and day out. That put me in a dilemma. Both of them advised me to come and play in India, and here I am.

Did you have any idea of Indian Football prior to coming here?

Not at all. But I was shown some videos of Indian Football. I watched them, and as destiny has it, I signed for Mohun Bagan.

What videos did you watch?

I watched videos of Mohun Bagan playing, videos of all my current teammates playing. That impressed me.

Are you aware of Mohun Bagan’s stature in Indian Football?

Prior to joining any club, any player will do research on the club he is signing for. I am not an exception. I am aware of the history of the club, the fan following, and of course, I have also heard about the Mohun Bagan-East Bengal rivalry. To me, that’s the El Clasico of Indian Football.

How has your experience been so far in India?

The warmth by which I have been welcomed in the club has been amazing. It has all been seamless. Even prior to me landing here the management knew what needed to be done to take care of the comfort level of the players. I need to thank them for that.

The coach and the players have acted like hardcore professionals. I haven’t faced any hitch as yet. And I need to make a special mention of my manager Imran (Khan) who has been my brother -- ever-smiling, and willing to help -- not just me but the club overall, tirelessly and efficiently.

Given your pedigree what value addition do you bring in to the Club?

I don’t have any pedigree. I am just another player who works hard and has been honest on the field. I come here with an aim of helping the club win the Hero I-League. I come here to give my 100 percent on and off the field. It is not just about me. Rather it is all about the club, the coach, all my teammates, the management, the support staff, and of course the fans. I will just try to play my role to perfection.

What will be your role in the team?

Football is about goals, and I hope to score some and help my team.

Do you have any targets as to how many you intend to score?

It’s human psyche to exaggerate stuff, be it in any sphere of life. Goals are meant to be scored, and not to be spoken about how many one will score. I believe words mean nothing unless the player is able to put it into the net. It’s better to speak about goals on the pitch than off it.

You referred to the Kolkata Derby as the El Classico. How much are you looking forward to it?

The beauty of football tells us that there are Derbies all over the world. But in the process of focussing on the Derby matches (including the return leg), people make the mistake of missing out on the eventual aim -- winning the League. The significance of the Derby will always stand out, but at the end of the day, it’s just another match. But at the end of the day, the League title supersedes everything else.

There’s a picture of you with Lionel Messi on the internet which has gone viral in India. How was it playing against him?

Lionel Messi and Cristiano Ronaldo – they are at the top for what they are. It was a dream to play against them. My football abilities have entitled me to play against Messi some 5-6 times, and against Ronaldo some 5 times. Playing against them made me confident as a player, and only the best can compete against them.

Football has given you so much. How do you want to repay back?

(Baba smiles). I try to help young footballers. I have taken some three exceptionally talented young players to Portugal where they appeared for trials and are pursuing their football career. If I can bring a smile to at least one face through football, I would be an extremely satisfied man.