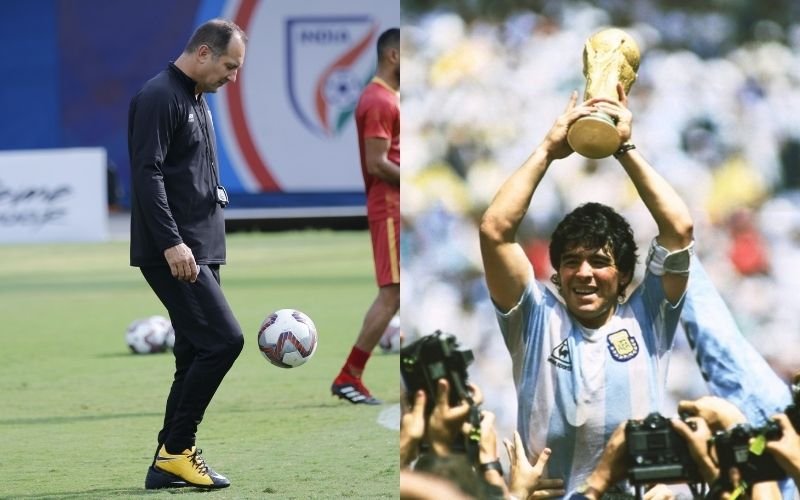 Igor Stimac played against Diego Maradona on two occasions. First, in the 1992-93 La Liga season, when the latter represented Sevilla, while Stimac was donning the Cadiz CF shirt. The second occasion was before the FIFA World Cup 1994, when Argentina played an international friendly against Croatia. The former Croatia defender, after the legendary footballer's untimely demise, shared his emotions on Indian Football’s official website.

SPLIT (CROATIA): Diego Maradona – the "King of Football", the legend. How can someone describe him with one word or just an adjective? After representing my country for so many years and playing for so many clubs over the course of my career, I am still in awe of this maestro.

His balance and acceleration were things that every defender was scared of. You could barely knock him down while he was running with the ball. His no-look passes were intimidating. We played a friendly match played in Zagreb, Croatia before they would travel to the USA to participate in the 1994 FIFA World Cup. Very often, he was dropping deep to receive the ball, and his long deliveries to (Gabriel) Batistuta and (Caludio) Caniggia were absolutely perfect.

He was everywhere on the pitch. Sometimes, he was running past the defender through the right-flank. Next, he was seen playing a quick one-two with the forwards to work an attacking move. It was a menacing task to contain with the deadly attackers, obviously led by none but Diego and as a central defender, it was a real test for me.

Thankfully, we came out with a stalemate in front of 38,000-strong Croat supporters at the Maksimir Stadium that night. But, Diego's performance was very, very special that night and we were really fortunate to have shared the pitch with him.

During 1992-93 La Liga campaign, I had another opportunity to play against him when he was with Sevilla. He was the biggest star among the stars including Davor Suker, my then National Teammate, Diego Simeone, and their FIFA World Cup-winning coach Carlos Bilardo.

After FIFA World Cup 1986, Maradona and Bilardo came together once again and Maradona's coming back to Spain after eight years made everyone in Spain go absolutely berserk.

Maradona recorded his first appearance away at the San Mamés against Athletic Club with an assist and followed that up with the winner from the penalty spot against Real Zaragoza in his home debut. We could say, he was the fulcrum of the side. Whether Sevilla played well or not, it depended upon whether Maradona was playing well, and he controlled the side with his world-beating left boot.

You are one of the reasons why the world love the game we have played. We'll miss you.

My thoughts are with your family and close ones. Thank you, Diego 💔#Maradona #RipMaradona pic.twitter.com/sD6Uv5NOxy

A derby between Cadiz and Sevilla never denies to be a dull affair and when someone like Diego was there, it was meant to be a high-octane one. We had a torrid time in defending against the likes of him and Suker. Unfortunately, we had a collision on the pitch and Diego had to be substituted half-way through the game. It was a stalemate and we left the pitch with an important point. I must say, I was lucky enough to have not conceded a goal against him!

At the 2016 Davis Cup final in Zagreb, he had travelled all the way to cheer for Argentina when they faced off with Croatia. The amount of passion he showed when the likes of Del Potro and Delbonis were breaking sweat on the court was unbelievable.

Finally, Argentina beat Croatia to lift the trophy and you won't believe, he was jumping like a kid in the VVIP Box. Little did I know that it was going to be our last meeting. We were cheering for opposite teams but spent many hours discussing various topics from politics to football.

El Diego had a heart of pure gold. He didn't think twice before expressing himself. He never thought about how people would judge him. He lived on his own terms, left on his terms, rendering us shell-shocked. You will be missed, Diego.

(As told to Shoubhik Mukhopadhyay)