Women Football
It means everything for us to be able to play the AFC Women's Asian Cup in India: Aditi Chauhan 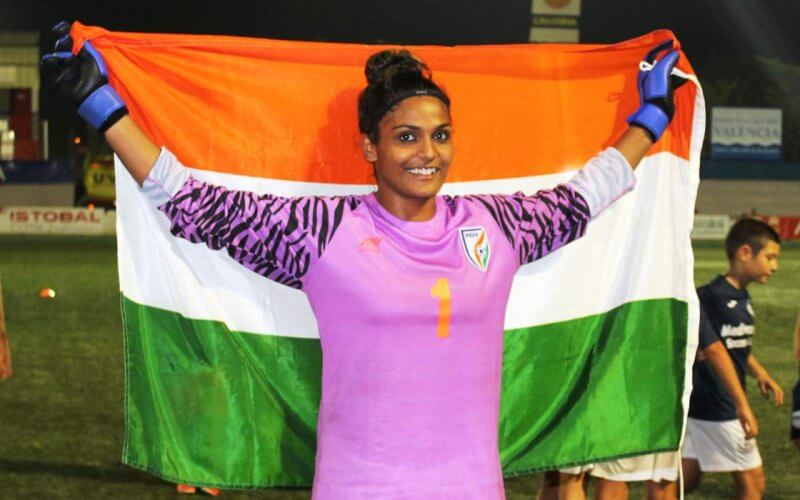 NEW DELHI: 2022 promises to be a landmark year for Indian football as the nation is scheduled to host two major events in the AFC Women’s Asian Cup India 2022TM followed by the FIFA U-17 Women’s World Cup India 2022TM. And standing on the cusp of potentially path altering events, goalkeeper of the Indian women’s football team Aditi Chauhan talks about inspiring youngsters, putting Indian football on the world map, showcasing the progress of women’s football, and attracting more eyeballs.

Goalkeepers tend to be confident by nature and the Indian custodian sounded upbeat about the transformative possibilities of the two international events.

“Looking at the history of women's football, even in the United States (US), which is the top country when it comes to women's football, I think the trend or the attraction towards football started when they won the World Cup.

“That was the moment when development of women's football really kicked off in the true sense because that inspired the entire country, the entire younger generation and the supporters because that put US on the world map. And I think something similar can happen for India.”

Aditi’s optimism is trumped only by her excitement as she believes this will showcase the progress of women’s football in the country. “[I am] very excited about the AFC Women’s Asian Cup that will be held in India. It is a great opportunity for us to show the world and our supporters in India how far we have come, especially in these last few years with the regular international exposure trips and tournaments.

“It is a great opportunity for us to prove the potential of women's football in India which will put us on the world map of the women’s game,” she said and continued. “This is probably a once in a lifetime opportunity for us to show what we're capable of, attract more supporters and inspire the younger generation.”

With six months to go for the premier continental championship, Aditi feels proud and excited to have the opportunity to compete in a tournament of such repute in her own country.

“As players, it means everything for us to be able to play a major tournament like the AFC Women’s Asian Cup in our own country, “she said. “Over these past few years, all of us – the top management, AIFF, legends like Sunil Chhetri and indeed all the players in the women's team – are in agreement that women's football possesses great potential and capability to achieve great things at international level.”

Moreover, as a fan of the game, the goalkeeper is excited to watch the best players bedazzle audiences in the Indian subcontinent.

“This will also be an opportunity for football fans in India to see the level of women's football around the world. The standard of football that will be displayed during the AFC Women’s Asian Cup will really help us get more momentum, more supporters, more interest, and more eyeballs towards the game,” said Aditi before adding how tournaments of the ilk play a key role in pushing the women’s game forward. “[These factors] will definitely help in the development of the sport in the country in the coming years.”

While tournaments like these can change the course of the sport, Aditi talks about the importance of preparation and a huge responsibility in extracting the full potential in developing the game and inspiring young aspirants.

“It is a huge amount of responsibility on the players and staff to put up a great show at the AFC Women’s Asian Cup and the FIFA U-17 Women’s World Cup to substantiate our emphasis on the development of women's football and what we can achieve with the right contribution and with the right development. We can inspire the younger generation, both boys and girls.

“It all depends on how well we prepare for it, both mentally and physically. But I am very confident that with the right guidance and preparation, we will be able to put up a good show and prove why we are saying that women's football has great potential in India.”

Major international tournaments often pit the best each country has to offer, and Aditi, winner of the Indian Women’s League 2020 with Gokulam Kerala FC, is eager to take the field alongside the top players of the game.

“I am very, very excited and pumped up to play in a major tournament like this with some of the best players in the world. It is a dream for every player to be representing the country at a world stage against the best players. I have been looking forward to this ever since the announcement was made that India will be hosting this tournament.”

Aditi is positive that her and the team’s excitement is translating to hard work in preparation for the tournament.

“I am putting in all the hard work. In fact, the entire team has been in touch with each other, and we are all very, very excited and really looking forward to [the AFC Women’s Asian Cup]. We have all been putting in the hard work, even during the lockdown,” said the 28-year-old while stressing on the importance of moving forward.

“We know where our focus is and what we need to do to be able to maintain our fitness, so that whenever opportunities arise, we are at our best level in order to progress and keep improving. We just have to keep moving forward and for that, we have to put in the effort individually when we are at home, when we are not able to be together as a team.”

Aditi also spoke about the importance of eyeballs and awareness in developing the game by inspiring young players. “I think there's a lot of talent [in India] and hosting such major tournaments will open up a lot of avenues because obviously there will be the entire world media here. Coaches and scouts will all have their eyes on the young players and the team.

“A good showing here will inspire a whole generation and we will be able to take massive steps forward in terms of improving the game, improving women's football, providing opportunities, and truly achieving the potential of women's football in India.”

“Hosting these major tournaments will also help us put a very formal development pathway. With these tournaments we will get the media attention as well as investment for infrastructure. That will create a good, strong ecosystem for women’s football to grow by encouraging girls to take up the beautiful game at the grassroot level. In consequence, a foundation will be created to build on. And hopefully then, we can realistically think of and aim at playing the FIFA Women’s World Cup in the next few years,” she concludes.