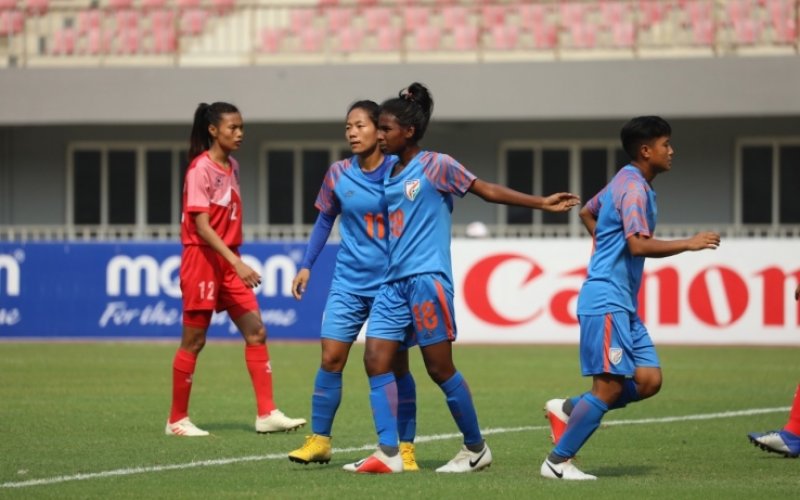 MANDALAY (MYANMAR): The Indian women’s national team defeated Nepal 3-1 in their second group stage match of the Olympic Qualifiers Round 2 at the Mandalarthiri Stadium in Mandalay, Myanmar today (April 06, 2019) to go top Group A with six points out of two matches, with hosts Myanmar to play later in the day against Indonesia.

A Punam Magar own goal gave India the lead in the 6th minute which was subsequently cancelled out by Niru Thapa’s strike in the 7th. However, Sandhiya Ranganathan’s header in the 60th minute and skipper Ashalata Devi’s 78th-minute penalty led India to a hard-fought win, grabbing three crucial points in Group A.

Speaking after the match, skipper Ashalata Devi said, “We wanted to win this match and I am happy that I could contribute for my team with a goal. Nepal are always a tough opponent to face so this win is all the more sweeter.”

“We are very happy to go into the last match (against Myanmar) on a winning momentum and now our focus shifts towards that," added Sandhiya Ranganathan.

The Indian women had spared little time in pleasantries and switched on their attacking mode from the fire whistle. With Grace and Sanju on the wings terrorizing the opposition defenders, the first few minutes of the match played out in India’s favour with a goal coming in the 7th when Nepal’s Punam Magar slid the ball into her own net after a cross from Sanju to give India the advantage.

But caught off-guard, the Indian defenders were left reeling after Niru Thapa equalized, tapping home from inside the box, in the next minute itself to level proceedings. Sanju hit the post from inside the box in the 9thminute as the Indian women looked to regain their lost lead. Ratanbala Devi had a golden chance to give India the lead again in the 25th minute but her header off a Sanju cross went inches past the goal.

With end-to-end action enveloping the early minutes of the match, the game evolved into a battle for possession in the midfield with the Indian midfielders dominating and the opponents relying on counter-attacks.

The Indian women aimed to continue their momentum in the second half of dominating possession and in the 48th minute Sandhiya’s shot from close range after Ratanbala Devi had slid her onto goal was easily collected by the opposition custodian.

In the 58th minute, Dalima Chhibber attempt to slyly tuck a curling shot into the corner of the net from inside the box but her attempt which inches wide of the goal as Nepal survived another Indian attack. A minute later, Ratanbala was found inside the box by Grace’s low cross but her attempt resulted in a weak shot that was subsequently swept for a corner.

From the resulting corner, Sandhiya made clean contact and headed home from close range to give India the lead as the scoreline read 2-1.

Spurred by the sudden Indian goal, Nepal tried to commit bodies in attack and look for a way to equalize proceedings. Attempts by Sabitra Bhandari and Dipa Rai went inches away from the Indian bar. Some resolute defending in the latter stage of the match by the centre back pairing of Sweety and skipper Ashalata Devi, saw the match out for India and the skipper herself got on the scoresheet, converting a penalty in the 78th minute to double India’s lead as the full-time scoreline read 3-1.