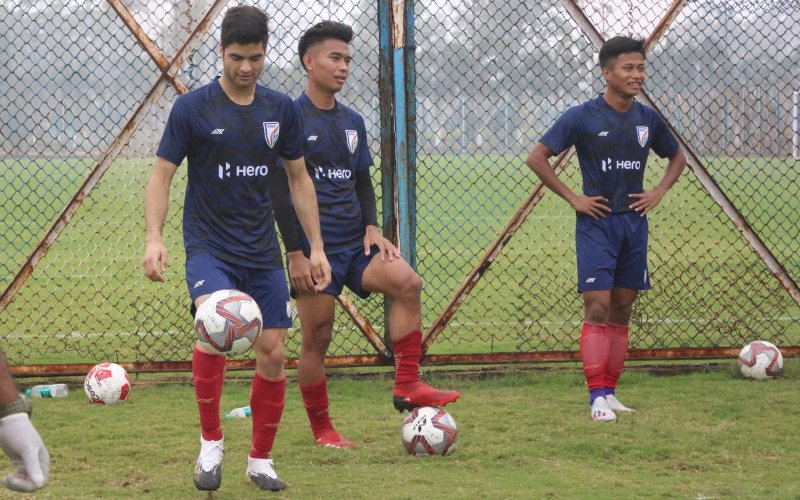 KOLKATA: As the new batch of Indian Arrows prepares for the challenges that face them in the upcoming Hero I-League, a few of the boys will be drawing their inspiration from more familiar quarters – home.

All India Football Federation’s developmental side Indian Arrows have been infused with a new batch of boys this season, boys that have come through the ranks from the U-17 National Team, with the aim of preparing them for the 2022 AFC U-19 Championship. The players had first assembled in Bhubaneswar, where they had a brief training camp with the aid of the Odisha Government, before they made their way to Kolkata for the pre-season, leading up to the Hero I-League.

Two of the midfielders from the Arrows – Harsh Patre and Lalchhanhima Sailo – are from police backgrounds, with their fathers working as the protectors of the realm even during the times of the pandemic.

Lalchhanhima Sailo, who is one of the few players who were in Arrows last season, is another member of the squad whose father was risking his life on the lines. The 17-year-old’s father, Lalnunmawia, is a Sub Inspector, posted in the Mamit district of Mizoram, along the state’s borders with Tripura and Assam.

“Border duty, even state borders, could be very taxing for the police officers. Of course, they have their regular duties to perform, but during the Lockdown, they had to double-up on COVID duty as well,” said Sailo.

“Making sure there is no movement across the state borders is very important, especially during a pandemic, to ensure that the virus does not spread. It makes me really proud when it strikes me that my father has also fought the pandemic in his own unique way,” stated Sailo.

“I am just starting out on my football career, but even at this stage, there are ups and downs. But whenever I am faced with disappointments, I look back at my father and the difficulties he would be having while manning the state borders during a pandemic, and I draw all the strength I need from that.”

Goan midfielder Harsh Patre’s father Shailesh is a Hawaldar in Goa Police, who has also played his role during the pandemic.

“The thing that many don’t realise is that the COVID warriors have to come back to their families after their shifts are done, and that is where everyone needs to be careful,” said Harsh, who along with his mother, sister and grandmother, would take all the necessary sanitisation precautions once his father would come back home.

“We have to be especially protective of grandmother, who is probably the most at risk, when it comes to COVID-19 due to her age,” stated Harsh. “But as a family, we would stay strong and move forward together past such difficult times.”