News
India go down to Tajikistan 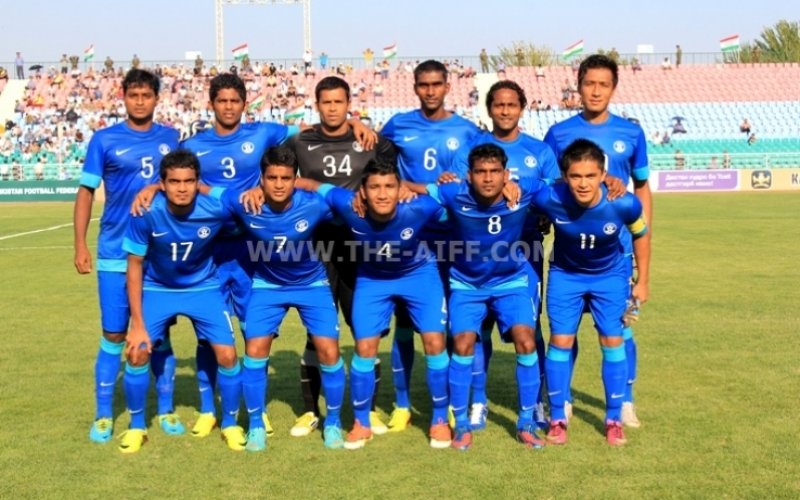 KHUJAND: India went down 0-3 to Tajikistan in an International Friendly at the 20 Years of Independence Stadium in Khujand on Wednesday (August 14). Davronov Nuriddin opened the scoring for the Home side in the 12th minute while Fatkhuloev Fatkhullo, who made way for the first goal, doubled it six minutes later. Akhtam Khamrakulov sealed the fate of the match in the 93rd minute.

India were off to a cautious start. Backed by a partisan crowd of 10000 Tajikistan were off the blocks faster. They stretched to the flanks as they looked dangerous in the first 10 minutes. Though India earned a corner in the first minute itself which went abegging, Tajikistan kept up the pressure.

They were rewarded as early as the 12th minute when Fatkhuloev Fatkhullo sped down the left and his low centre was tapped in by an onrushing Davronov Nuriddin.

The goal spurred Tajikistan further and they doubled the lead six minutes later. Vasiev Dilshod went past Nirmal Chettri only for the latter to bring him down just outside the box. The resultant free-kick was curled into the far corner past a diving Sandip Nandy by Fatkhuloev Fatkhullo. Chettri was yellow-carded for his offence.

India’s first chance came in the 24th minute when Clifford Miranda found a loose ball just outide the box off a Raju Gaikwad long throw but his scorching left-footer was punched away by the rival goalkeeper Tuychiev Alisher.

Thereafter, India regrouped and stitched a string of passes in the midfield but Tajikistan, enjoying a two-goal cushion slowed it down.

Just prior to the interval Sandip Nandy, in an effort to keep off Nuriddin long-ranger suffered a muscle pull and was replaced by Karanjit Singh under the bar in the 43rd minute.

Tajikistan led 2-0 at the interval.

Minutes later, Sunil Chhetri, receiving a long-ball from Francis Fernandes found Miranda in the clear. Miranda did enter the box but his left-footer went off the target.

Thereafter, India held possession for most of the half. In the 66th minute, Francis Fernandes hoodwinked Nazarov Akhtam and entered the box down the right flank but didn’t find much support.

Immediately after, there was another double substitution – Dawson Fernandes made his debut for India replacing Sunil Chhetri while Malswamtluanga went in for Miranda.

Dawson could have almost scored with his first touch but rival Goalkepeer Alisher anticipated Arata’s through pass that split second faster than the debutant. The very next moment, Alisher denied Mehtab the same manner.

Koevermans utilised all his substitutions as Robin Singh came in for the tireless Mehtab Hossain in the 77th minute.

Tajikistan scored the third goal in the 93rd minute.

India next play arch-rivals Pakistan in their opening match of the SAFF Championship in Kathmandu on September 1.