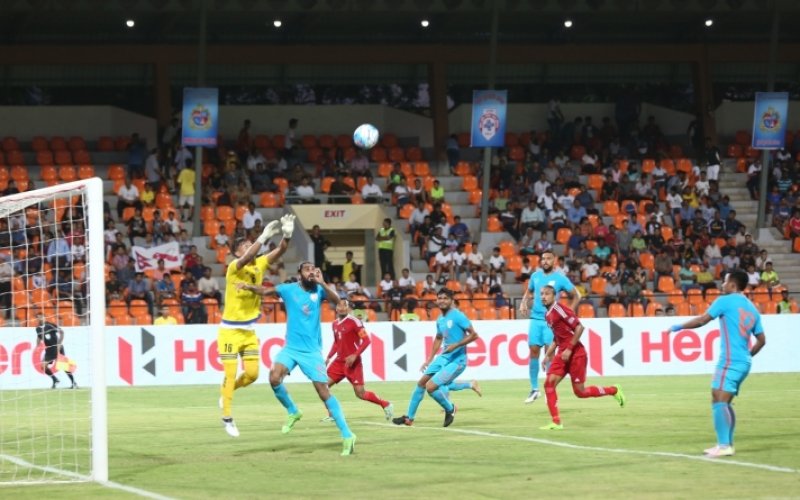 MUMBAI: The Indian National Team continued their purple patch under Head Coach Stephen Constantine and registered their seventh consecutive win (including the unofficial match against Bhutan) after India defeated Nepal 2-0 in an International Friendly today (June 06, 2017) at the Andheri Sports Complex in Mumbai.

Sandesh Jhingan ‘s 60th minute strike and Jeje Lalpekhlua’s 78th minute goal proved to be the difference between the two sides in a tightly contested match where Nepal were reduced to ten men after the visitor’s captain Biraj Maharjan was sent off in the 68th minute.

India started the game brightly as Robin Singh upfront tussled for balls played from the midfield, releasing Halicharan Narzary once from the wings through a header and almost releasing Jeje onto goal in the opening minutes. In the 5th minute itself, Robin Singh had the chance to give India the lead but before the robust forward could release his shot, the Nepalese defence robbed him off possession.

In the 16th minute, the Nepalese custodian caught Mohammed Rafique’s cross but Sandesh Jhingan’s momentum to head the ball resulted in the ball, the custodian, and Jhingan himself ending up in the back of the net. The referee called it foul play on Jhingan’s part.

Composed and pressing as a unit, whilst counter-attacking in numbers, the Indian midfield held off Nepal for much of the opening minutes. Indian custodian and skipper Gurpreet Singh Sandhu made his first save in the 18th minute, picking up an easy shot.

Jackichand Singh’s speed on the wings proved hefty to deal with for Nepal and in the 23rd minute, his cross was met by a Robin Singh header that went inches past the goal as India pressed to take the lead.

Robin Singh was once again involved in play upfront and in the 28th minute his shot from a tight angle failed to find the net and in the 33rd minute Robin’s header flew over the bar.

Nepal almost turned the ball into their own net in the 38th minute when Jeje’s flick on the near post was met with a header from the Nepalese defence line, but thankfully, for the visitors the ball went over the bar. Nepal almost scored in the dying embers of the first half but Shreshta failed to drive the ball home into an empty Indian net. The half-time scoreline read 0-0

India sprung into life in the second half and in the 56th minute, substitute Bikash Jairu’s shot from inside the box came close to taking the lead for India, had Nepal’s custodian not denied his effort. However, four minutes later, Sandesh Jhingan’s half volley ended in the back of the Nepalese net after a corner kick scenario as India took a solitary goal lead.

A red card to skipper Biraj Maharjan in the 68th minute added to Nepal’s woes after his uncanny challenge on Bikash Jairu prompted the referee to give him marching orders. Nepal sat deep and defended for much of the match, soaking pressure of Indian attacks.

Jeje slotted home in the 78th minute after latching on to a perfect Rafique cross from the wings to double India’s lead and give Constantine’s men some breathing space. The full-time scoreline read 2-0 as India gained morale with a comfortable win going into the clash against Kyrgyz Republic on June 13, 2017 in Bengaluru.