Senior National Team
INDIA COME BACK FROM BEHIND TO BEAT MAURITIUS 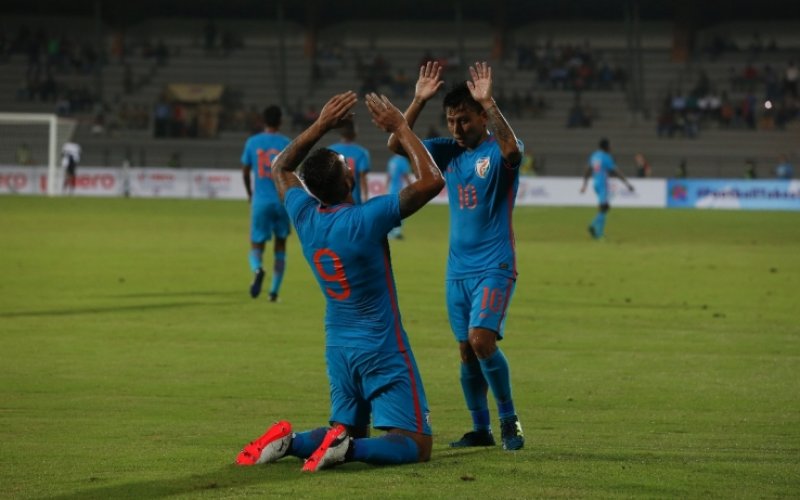 The victory set a record in Indian Football as this is the first time ever that an Indian National Team have won eight official matches on the trot.

Meanwhile, it was India's 14th win in their last 16 matches in the International Arena when local lad Nikhil Poojary, Amrinder Singh and Manvir Singh were handed their international debuts for the Senior National Team marking a red-letter day in their football career.

National Coach Stephen Constantine made three changes at the half-time, two of which were debuts -- Nikhil Poojary and Amrinder Singh coming in to replace Jackichand Singh and Subrata Paul respectively. Balwant Singh also came in for goalscorer Robin Singh and felt best to take his name into the score sheet.

The Almighty had written a different script for the Punjab-born striker who went onto score his first goal in the National Colour just after the hour-mark in his second outing for the Senior National Team.

Eugeneson Lyngdoh lofted a juicy delivery to Jeje Lalpekhula who flicked it wisely to Balwant who took all his time to tap it home to snatch a late lead in the 62nd minute.

Rafique, who replaced Eugenson Lyngdoh who created another gullible opportunity for scoring but Halicharan Narzary blasted it onto the perimeter boards.

Another debut was handed by the gaffer as U-23 striker Manvir Singh replaced AIFF Player of the Year Jeje Lalpekhlua three minutes to the end of the regulation time.

On his first touch itself, the lanky youngster could have found the target but his looping delivery landed over the net to leave the crowd aghast. But it didn’t matter much.