Senior National Team
IN THE LARGER SCHEME OF THINGS, WE HAVE NOT ACHIEVED ANYTHING: CONSTANTINE 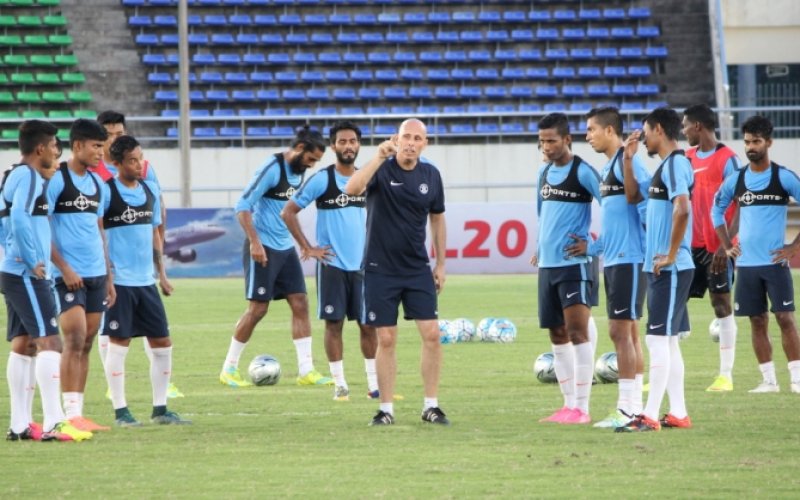 NEW DELHI: National Coach Stephen Constantine feels that the Team has been able to “raise the bar in the last two years.” On a day when India retained their spot at 100 in the June FIFA Rankings, Constantine, in an interview, spoke at length about the significance of being 100, every opposition being “dangerous and difficult,” how far the present batch can reach, strength of Kyrgyz Republic and vocal support of the Yellow Brigade and the West Block Blues. EXCERPTS:

I understand we have been able to raise the bar over the last two years and that’s what the intent was. However, in the larger scheme of things we have not achieved anything. After our International Friendly against Nepal, we play against Kyrgyz Republic and they are a very dangerous and difficult opponent.

How far do you believe this bunch of Indian Footballers can reach?

As far as they want. I think the nucleus of this team is there for the next 4-5 years and right now we are focussing on the AFC Asian Cup UAE 2019 which is on the top of our priority list.

You have always maintained that every opposition is a ‘dangerous and difficult opponent.’

(Smiles). Some people do feel that I always make the other Team look bigger than us. That’s because at the moment we are trying to establish ourselves in Asian Football. Once we are perpetually qualifying to the AFC Asian Cup and to the final qualifying stages of the World Cup from Asia, we can start to think and feel we are a big team. We are not there yet but are on the right track.

What do you expect from Kyrgyz Republic?

They have some very good players and are very well organised. You think of the belt they are coming from and their neighbouring countries -- Uzbekistan, Kazakhstan, Tajikistan, Turkmenistan – you will understand that they are all very capable players. They will be very difficult and we expect very difficult games, both at home and away.

What kind of support do you expect?

News Eugeneson Lyngdoh ready to be back with a bang

Women Football Bala's 'path-breaking' journey will inspire us all...