News
I want to be top scorer in the Hero ISL, declares young gun Vikram Partap 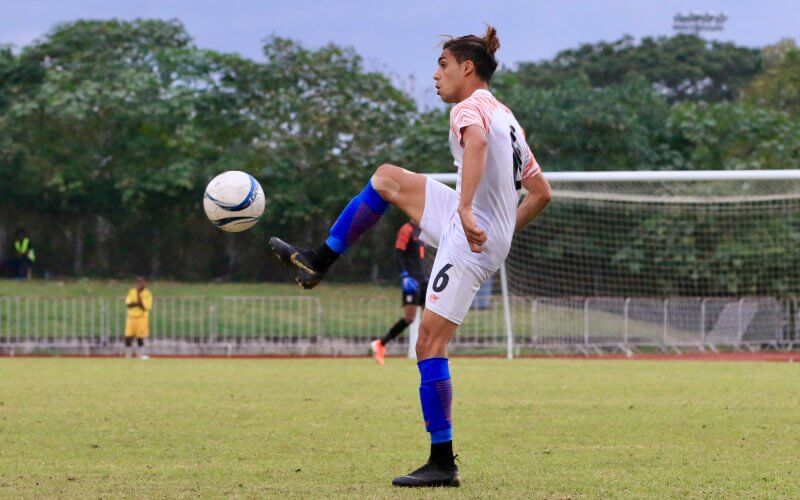 NEW DELHI: After a breakthrough season with the Indian Arrows in the 2019-20 Hero I-League season, 18-year-old forward Vikram Partap Singh has set high targets for himself, stating that he aspires to top the goal-scoring charts in the Hero Indian Super League besides making his National Team debut in the near future.

In a live chat with AIFF TV, Vikram who stated: "Firstly, I want to make my debut for the Senior National Team. At the club level, I want to compete against the best -- the likes of Sunil Chhetri bhai and the foreign strikers. I need to prove that I can perform well and even beat them,” he declared.

“I always wonder why only foreign players or Sunil Bhai become the top scorer. I want to prove myself that I can perform well and beat them and become a top scorer in the Hero Indian Super League.”

In recent times, the attacker has displayed maturity beyond his years with his performances for the junior national teams, leading the Indian side to a quarterfinal finish at the AFC U-16 Championship 2018 and then impressing in his two seasons with the Indian Arrows in the Hero I-League, where he made a total of 27 appearances.

"I feel that the maturity level has gone up because of the numerous exposure tours we got -- thanks to the federation. We got to play against so many top-level countries, which has made a big impact on me," he averred.

Vikram detailed how playing against some of the top countries from around the world has forged a “positive mindset” with time.

"Our batch has been lucky to play against strong teams from Asia, Europe and Africa. Initially, we used to be under pressure when we started playing at International level and there would be slight hiccups. But, due to the continuous exposure and opportunities to face top countries we learnt how to calm ourselves and perform better. Now, we go into every game with a positive mindset to do our best, no matter who we are playing against."

🗣️ Vikram Partap: I hope to play for the #BlueTigers soon! 🇮🇳😍

The young forward talks about his future ambitions and how he has adapted to the senior level 🙌#IndianFootball ⚽ #BackTheBlue 💙 pic.twitter.com/DCUZMOqTIU

'ARROWS IS THE BEST PLATFORM FOR YOUNGSTERS'

After impressing in the junior ranks, Vikram made the step up to the senior level in the 2018-19 season with the Arrows in the Hero I-League. According to the 18-year-old, he realized soon enough that there is a “big difference” in the two levels and started to mould his game according to the demands of the professional game.

Talking about his experience of being with the Indian Arrows, he termed it as the “best platform” for young players and stated that it helped him a lot to make the “transition” into professional football.

"The Arrows experience has contributed tremendously to my game. It is a platform where young players get opportunities and I would say that it is the best option for them. From the coaching to the facilities we got, everything was top-class. We used to play as an all-Indian line-up against teams with foreigners, which was an incredible exposure. There was pressure but it gave us confidence too. All in all, it has helped me a lot in my transition to the senior level."

"There is a big difference between age-group and senior level football. In age-group, one can take on defenders one-on-one at any time but at the senior level, things are more physical and one needs to think twice before beating anyone.”

"It was difficult for me in the first year as a senior as I had the mentality of playing my game as I did before. Slowly, with the guidance from my coaches I became better as I realized the importance of passing and that I had to think and make better decisions with the ball," Vikram revealed.

He followed it up with some excellent displays in the next edition of the Hero I-League, where he would often shoulder the responsibility of being captain and played a key role for his team as they garnered some brilliant results, such as away wins against Churchill Brothers and East Bengal.

Vikram expressed his gratitude towards his coaches, including Bibiano Fernandes and Venkatesh Shanmugam -- two former India internationals who had coached him in the U-16 National Team, and Indian Arrows respectively.

Speaking about the role played by Venkatesh in his development, the young gun mentioned that he gave him the “confidence” of playing without the fear of making a mistake, which helped him do better on the field.

"Venky (Venkatesh) sir has helped me a lot -- both on and off the pitch. He used to say very openly that we should just give our best every time with full confidence and not be afraid of making mistakes. He stressed on the importance of learning and recovering from one's mistakes and that has helped me perform better. The coach just saying such things and showing such faith in me had a huge impact," he said.

Vikram shared how Bibiano allowed players to play with a “fresh mind” and helped him improve his finishing in front of goal.

"Bibiano sir is a different coach. He looks after every player on as well as off the field, which allowed us to play with a fresh mind. It is the most positive thing about him. He used to always tell me to never use too much power while finishing and focus more on keeping the ball on target. He used to make us practice our finishing a lot and all of that work has been helping me in my game."

The live chat also featured a number of anecdotes shared by Bibiano and Venkatesh, with the former recollecting how missing one spot-kick in a friendly match prompted Vikram to take matters into his own hands and put more even effort into improving his penalty-taking. Incidentally, it was Vikram who converted from the spot against Vietnam in the AFC U-16 Championship two years ago, to help the team pick up three points.

"Whenever I have free time, I like watching videos on YouTube. When I missed that penalty, I looked up what drills I can do to get better at penalties. That's when I started practising using a cardboard box as a target in the goal and I would do it religiously after every session. Initially, my kicks were slow but with more practice, I improved the shot speed. Even now, I make it a point to keep working on my penalty kicks," Vikram affirmed.