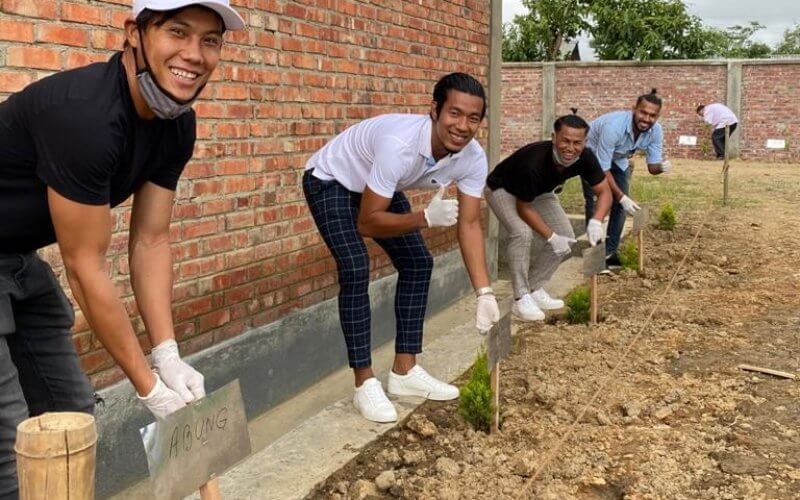 NEW DELHI: A number of stars from the footballing world assembled in a quiet little village of Tentha situated around 50 kilometres south of Imphal earlier this week for a noble cause. Interestingly all the athletes converged on this point to carry out an afforestation activity -- as they sunk their hands into the soil and planted different saplings.

Renedy, who has had an illustrious career with over 70 international caps to his name made the long trip all the way from Imphal because of an emotional connect to the place. The 41-year-old used to come to the village to participate in local tournaments.

“The village is about a one-and-a-half-hour drive from my house in Imphal. But I wanted to be there because it was a very good initiative by my friend Ajanta, who came up with the idea of planting trees around this beautiful ground,” Renedy said to the-aiff.com. “The pitch is right around the corner from where we were planting, and it really brought back so many memories.”

Blue Tigers winger Udanta Singh was quick to point out the positive aspects of the activity and urged the fans “to come forward and plant more trees.”

“It was great that all came together for this cause. We must all take care of our Mother Earth, and planting more trees is one way that we can make it more environment-friendly for us, and our future generations. I hope more people will come forward and sow the seeds of a better future for the next generations – not just here in Imphal, but all over India,” Udanta opined.

India’s U-17 World Cup quartet of Ninthoinganba, Suresh, Boris and Jeakson also planted their own saplings at the venue. NInthoi has been carrying out the same afforestation activities in nearby hills as well – an activity that he finds to be therapeutic.

“It’s very important that we spread the message of planting more trees across the country. I have been doing the same on certain hills in the nearby areas as well. I must say that I personally find the activity very engaging. It really helps me clear my mind,” said Ninthoi.

“It was really good to meet all of the seniors in Tentha and plant trees together. They had also played local tournaments here, it was good to exchange some old memories with people like Renedy-bhai and Ranjan-bhai,” he continued.

Suresh, who was Ninthoi’s teammate both in the India U-17 team, and at Indian Arrows in the Hero I-League believes that the exercise helped him learn a lesson about the virtues of planting trees.

“I have always heard people talk about the positives of planting more trees. But I had never really paid much heed to these things. But planting trees with all these guys today really gave me a new perspective on things. Of course, it’s good for the environment, and I think I’ll start planting more saplings from now on,” said Suresh.