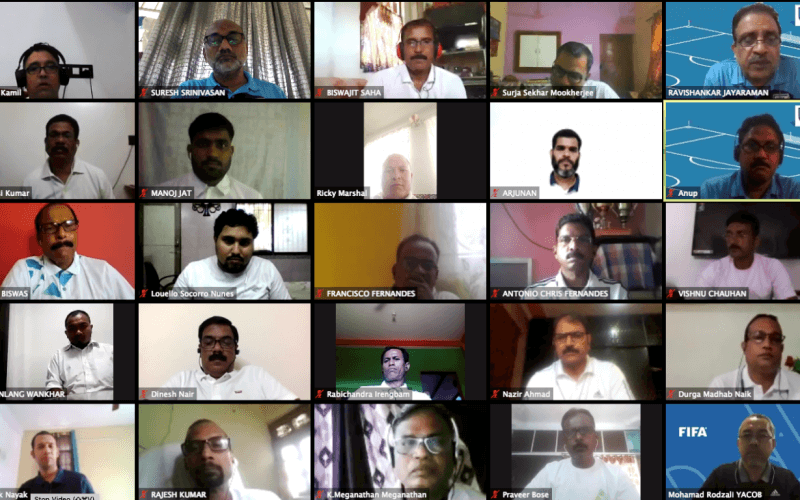 NEW DELHI: A four-day-long online FIFA Futsal Referee Instructor course organised by the All India Football Federation concluded on Saturday (October 17, 2020). 36 instructors from 20 states across the country attended the course.

Mr Seyed Moosavi from IR Iran was the course instructor and the rules of futsal, differences between futsal and football rules and regulations, fouls, coordination between both referees and communication with other match officials were the primary topics which were discussed during the course.

"The way of communicating and controlling a futsal match is different from a football match in many ways. In football, the referee is the primary decision-maker inside the field with assistance from his assistants. In futsal refereeing, group work is more profound."

"Two referees officiate a futsal match, although according to the laws and regulations, the final decision maker is the primary referee. But both of them have the same authority and they execute their decisions based on the FIFA rules. Due to the specific futsal rules, 'other match officials' like the time-keeper and the third referee are also important personnel in controlling the match," Moosavi commented.

"The existence of collective fouls in futsal makes the refereeing more challenging. The referee can not rule each contact as a foul according to his personal interpretation. Later, it may create an issue for him as well as the teams while ruling a collective foul. Consequently, it will impact the result of the match which is not desired at all,” he mentioned.

Nazir Ahmad, an AIFF panelled Referee Instructor, informed how this course helped him "gain good knowledge about laws of Futsal.”

"These sessions helped me gain good knowledge about the laws of Futsal. Mr Syed Moosavi's lectures were more informative and primarily based on practical instances. I'm looking forward to guiding the referees about the Futsal game and its laws so they can supervise successfully," he stated.

"In Futsal, substitution procedure is one of the main areas which needs to be handled more carefully. I would like to thank Mr Moosavi for clearing my doubts," Bagavathi Raj P commented.

"Earlier I had several doubts regarding the penalty kick from the 10-meter penalty mark after committing the sixth cumulative foul. Mr Moosavi described the situation vividly with match situations," Ahmad added.

"All colleagues tried to take an active part and contribute during the discussions. Our friends had queries and they tried to clear during the interactive sessions to reach a conclusion. Everyone tried to grasp the topics as much as possible and wasn't ready to leave without learning.

"While they did not have experience of refereeing in futsal but they were eager to learn throughout. With the cooperation from Mr Rodzali, Regional Development Officer, FIFA, All India Football Federation planned the sessions meticulously," Moosavi shared.

News Strikers need to be ruthless in front of goal: Far...