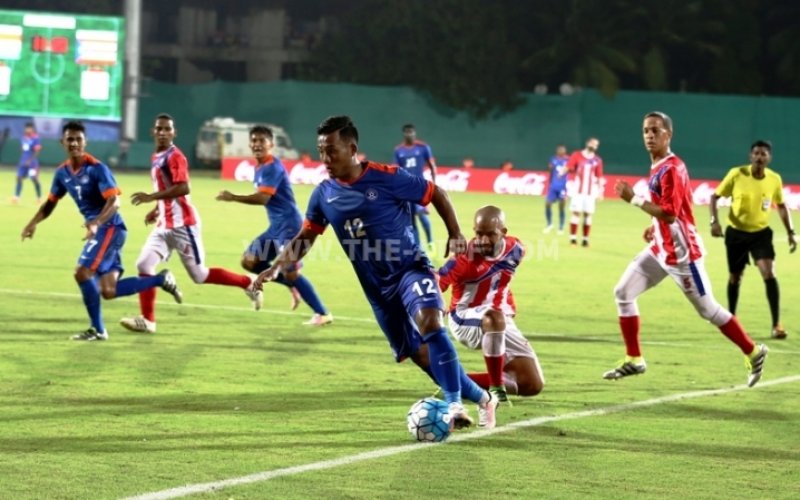 On taking the International Football back to the Financial Capital of the country after 61 years, Indian National Team added another feather on its hat by defeating the CONCACAF zone outfit. Meanwhile, It'll be a red-letter day for the 'Punjab-da-puttar' Gurpreet Singh Sandhu who made his debut as the National Team skipper. Albeit he had to concede an early goal from the penalty spot within first ten minutes, he left the pitch as the eventual winner.

Puerto Rico started on a high and they didn't need to wait for more to opening their account. Thanks to a sloppy tackle by Jackichand Singh on Elliot Velez in the 7th minute, Puerto Rico were awarded a penalty and Emanuel Sanchez scored with much ease from the 6-yard spot.

India started with two attackers upfront in the likes of Sunil Chhetri and Jeje Lalpekhlua and the boys in the blue started to press more to find the equaliser. In the 17th minute, Bikash Jairu was brought down just on the edge of the box and Sunil Chhetri shouldered the duty to taking the free-kick.

Sunil's free kick, having bounced off the near post, landed onto the medio Narayan Das who did no mistake to slot it into the back of the net to send the stadium into a delirium.

After netting the equaliser, there was no stopping for Stephen's wards. Sunil and Jeje combined immaculately to split up the defence once again in the 24th minute but D.Andrea tripped the lanky striker down at the edge of the box. Sunil and Eugeneson Lyngdoh lined up to taking up the free kick once again.

Sunil, who has already found the back of the net 50 times for the National Team, added another one tonight in the 24th minute. Having bamboozled the Puerto Rico wall, Sunil's low free-kick rattled the net keeping Santana stranded.

After the half-hour mark, Bikash sprinted past the defender from the left and all thanks to an excellent dummy by Sunil Chhetri, Jeje got the ball in a juicy position but his miscued effort skied off.

The Mizo striker, who is going through a fantastic year till now, took only two minutes to etch his name on the score sheet. On receiving a long ball by Pritam Kotal, Sunil fed it to Jeje who headed it home to make the scoreline steeper for the visitors.

Puerto Rico earned a late corner in the last minute of the first half but skipper Gurpreet Singh grabbed it to thwart the danger.

The boys in the blue headed towards the dressing room with a handsome lead of 3-1.

Stephen, who always emphasises on 'giving exposure to more players', introduced Rowllin Borges and Halicharan Narzary at the expenses of Bikash Jairu and Pronay Halder in the 46th minute.

Halicharan had an immediate impact on the match and almost got an assist in the 47th minute, but his long ball was too heavy for Eugeneson Lyngdoh who was trying to cut in from the right flank.

In the 56th minute, Puerto Rico's latest introduction Ramos came very close to scoring their second goal but the woodwork came in for India's help.

Jackichand Singh finally got his name on the scoresheet in the 58th minute when he smashed the roof of the net to set the stadium ablaze.

Time and again, Puerto Rico attackers tried to sneak in the Indian box but they could not go past the vigilant Indian defenders. Before 70 minutes, Jeje Lalpekhlua, who was reeling from a possible hamstring strain, was rested to make way for Sumeet Passi.

Just three minutes after joining the fray, Passi got a marvellous opportunity to scoring a peach of a goal but finally his effort landed onto the gloves of the opposition goalkeeper.

Daniel Lalhimpuia, a sensational kid from the AIFF Academy who has already made headlines for his exploits this year, replaced Sunil Chhetri twelve minutes to the end of the regulation time.

Puerto Rico coach was looking aghast, although he did try every single ammo from his arsenal to deny the inevitable. Stephen utilised his full quota of 6 substitutions by introducing Seityasen Singh and Germanpreet Singh for Jackichand Singh and Pritam Kotal respectively.

As Santosh Kumar blew the final whistle, the whole stadium erupted in joy. The whole team went on to acknowledge the 7000-strong supporters who thronged in the stadium to cheer their heart out for the National heroes tonight.