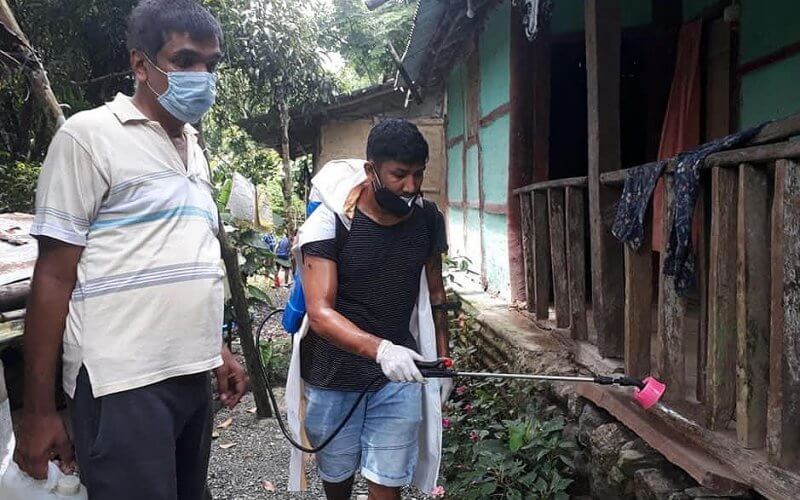 NEW DELHI: Former Indian National team defender Nirmal Chettri has been leading his local community from the front in the fight against COVID-19. Nirmal, who hails from Melli, Sikkim, organized and led a three-day-long sanitization drive in his home town, terming it as his "duty" to join the cause.

Speaking to www.the-aiff.com, he said: "The current circumstances are challenging. I strongly feel that is my duty to help the people around me in the best way possible. I had the idea of organizing a sanitization drive in my village and discussed it with my friends and senior players. They all were enthusiastic about it and we decided to go ahead with it."

The drive took place from August 12-14 and was done by players and members of FC Melli, a team that was founded by Nirmal two years ago with the aim of helping local football players get more exposure, along with support from other local leaders. Under the initiative, the main market in the village and key areas such as hospitals, banks, ATMs, police station and check-posts were sanitized, along with each house in two wards, with the number being around 500-600 homes.

Nirmal explained the importance of ensuring sanitization of key areas in the village and especially the local market, as many people are dependent on it for their livelihoods.

"The market in my village is a big one and many local shopkeepers and people from neighbouring areas rely on it for their income. However, due to the threat of COVID-19, they were hesitant to come,” he informed.

"I am glad that with the sanitization being done successfully, it will enable people to remain safe while continuing with their daily activities. It makes me happy to see that my friends and I have been able to contribute in the fight against the coronavirus," he continued.

On August 16, Nirmal also led an initiative to help clean the local football ground, which had not been in use since the first imposition of the lockdown.

"Our local ground has not been used for last 4-5 months and as a result, there was waste lying around and the grass also needed to be cut. With the public spaces opening now gradually, we thought of cleaning it and restoring it to its normal condition. Club members, junior and senior team players, and local social workers pitched in together to clean the ground and premises," he mentioned.

The 29-year-old, who made his Blue Tigers debut in 2011, shared how he has been putting in efforts to help the people in need during these challenging times.

"I have been involved in social work for a long time at personal level and with my club. If anyone around me is facing any problems, I try to help as much as I can. When people were facing problems due to heavy rains and floods, I supported them,” he stated.

"Since the lockdown, I have helped needy people receive supplies and contributed in the setting up of the local screening centre in Melli. Four of us (players) from Sikkim -- Sanju Pradhan, Bikash Jairu, Robin Gurung and myself -- joined hands and contributed a total sum of Rs 1 lakh to the Chief Minister’s Disaster Relief Fund as well."

Nirmal, who featured for Punjab FC in the Hero I-League 2019-20 campaign, termed the ongoing situation as "critical" and urged one and all to help in the "battle" against COVID-19.

"It is a very critical time for everyone and I strongly feel that all of us should do whatever we can to support our fellow citizens. We have to stay united in this battle and take care of the people around us," he affirmed.