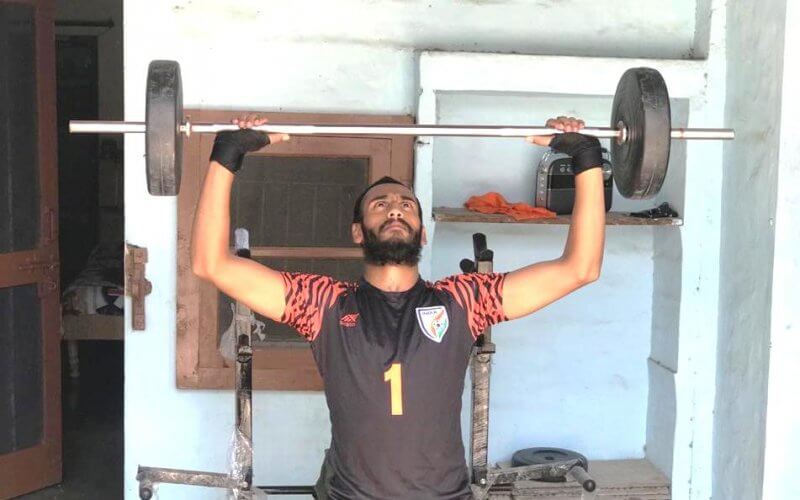 NEW DELHI: The COVID-19 pandemic has brought about a sea change in the way we go about our daily lives. Professional athletes across the world have been forced to innovate and find solutions to keep themselves in top shape. For goalkeeper Prabhsukhan Gill, who was part of the Indian team at the U-17 FIFA World Cup in 2017, a "homemade gym" has helped him keep himself in top condition at his residence in Sarabha, Punjab.

“As soon as it became clear that a lockdown is incoming (in March 2020), my brother (Gursimrat) and I had the idea of building a gym at home. We sourced and bought whatever equipment we could in that short time and created a gym in our own house,” Prabhsukhan informed. “There is at least 200 kilos worth of equipment -- such as rods, plates of various weights, dumbbells, medicine balls, along with resistance bands, cones etc."

The former Indian Arrows shot-stopper mentioned about overcoming the initial "frustration," and the “importance of remaining in the best shape possible” despite the uncertainty of the situation.

🗣️ @sukhan_gill_47: “As soon as it became clear that a lockdown is incoming (in March 2020), my brother (@gillsimrat33) and I had the idea of building a gym at home 🏠. We sourced and bought whatever equipment we could in that short time and created a gym in our own house 🤩." . #IndianFootball ⚽ #BackTheBlue 💙 #BlueTigers 🐯

"Initially, it was frustrating. It was normal to take things lightly during the lockdown, but my brother and I realized that if we keep sitting, nothing good will come out of it. Hence, we decided to get the equipment together and keep our muscles toned and body in shape as much as possible. We were determined to do the best we could in the circumstances," Prabhsukhan recalled.

For the first two months, the Gill brothers toiled in solitude at their homemade gym. However, once the restrictions were relaxed more players were able to come in to join them from nearby -- including Prabhsukhan's former Indian Arrows teammates -- Vikram Partap Singh, Narender Gahlot, Deepak Tangri and Gurkirat Singh.

"We made sure that we followed all the prescribed protocol -- such as sanitization and following the social distancing norms."

He also touched upon his routine these days, as public spaces have now opened -- which has led to a "camp-like" atmosphere at his village ground.

"We have a wonderful pitch in our village and have been using it once it was opened. Gradually, a few of us got together -- including 4-5 professional players, and we started our physical training there. We go there twice a day, with a gym session in-between. Interestingly, we share the ground with wrestlers, athletes and kabaddi players as well, which makes the atmosphere like one in a camp," Prabhsukhan added.

The custodian, who currently played for Bengaluru FC in the Hero ISL, has been part of the AIFF youth set-up since 2014 and stated that the early exposure helped him realize the importance of remaining fit and eating healthy.

"I joined the Indian team at U-14 level, and was immediately educated that if you have to be at your best and want to prevent injuries, you have to take care of your fitness. As we matured and gained more and more exposure, including International tours, we grasped more and more, with invaluable help from our coaches and staff.”

"When we prepared for the FIFA U-17 World Cup 2017 we learned about specific gym exercises that did not hamper our natural growth. We would get individual programs as well, which played a huge role in our development."

After the mega-event, Prabhsukhan was part of the Indian Arrows outfit from 2017-18 onwards -- making 33 appearances over two seasons in the Hero I-League and Hero Super Cup. In the 2018-19 Hero I-League campaign, he started in 18 out of 20 games for the side as they went on to finish with an impressive 21 points.

"We were all kept well by the AIFF on all tours and always had multiple healthy options to eat. By the time we came to the Arrows, we had a good amount of knowledge of what our body needs. I fondly look back at my time with the team, especially the second season -- where I felt I improved a lot and grew mentally stronger,” he affirmed.