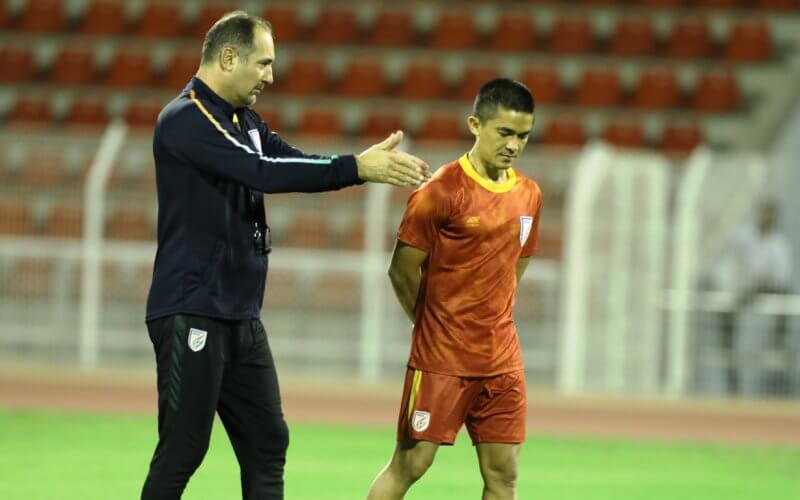 NEW DELHI: From being a 20-year-old mischievous talented striker to 35-year-old ‘captain, leader, legend,’ Sunil Chhetri has seen Indian Football through thick and thin. Coaches, who have nourished the gem with utmost care to yield the best for the team have seen numerous changes from close quarters but one aspect has remained absolutely perpetual, resolute – Chhetri’s never-say-die attitude and ‘dedication.’

Igor Stimac, current Head Coach of the Blue Tigers recalled seeing Chhetri during the preparatory camp ahead of the King’s Cup 2019 – his maiden assignment with the Blue Tigers. The Croatian pointed out that despite being the senior-most member of the troop, “Chhetri craved to push maximum to achieve the result after the heartbreak in AFC Asian Cup.”

“Dedicated, workaholic and team man -- those are some of the attributes which define Sunil Chhetri. When I first saw him last year, they were back to the National Team camp after a long gap following the AFC Asian Cup. A few boys were new but the fire under his belly probably was more than anyone else. That's the secret of his long career. Congratulations!” Stimac said.

Sukhwinder Singh, while reminiscing the Indo-Pakistan bilateral series in 2005, revealed that he wasn’t sure about the youngster’s credibility at all.

“I needed someone who had the trickery, didn’t have the fear, and had to be quick. Honestly, Sunil wasn’t in my mind at all. He wasn’t my first option. I had my doubts,” Sukhi- paaji, coach during Chhetri’s first National Team endeavour, recalled.

He had seen the youngster from close quarters while coaching in JCT where Chhetri started blossoming and hogging the limelight. Chhetri, who scored more than 20 goals during his 3-season-long stay in JCT, had already shown signs of performing in the bigger stages which convinced Sukhwinder Singh picking him up for the high-octane bilateral series in Pakistan.

“I haven’t seen anyone as dedicated as Sunil,” Sukhwinder maintained. “I saw him maturing in JCT and there were flashes of what he could do in the future. I still remember his hunger. In 19 years of my coaching career, I haven't seen anyone as dedicated as Sunil. He remained undaunted and was never willing to shy away from working hard. Shouldering the responsibility for 15 years demands discipline and he keeps it above everything else.”

According to Stimac, Chhetri is someone who always runs the extra yard, breaks some more sweat during the training session which, in the process encourages the youngsters to emulate him. The entire process aids the cumulative progress of the team and raises the bar.

“I see him as someone who always pushes the bar in the training and never compromises with the regime. He drives the team and he is the character who defines the team. Numerous characters have glorified the Indian Football history and he's definitely one of them who have made his country proud.”